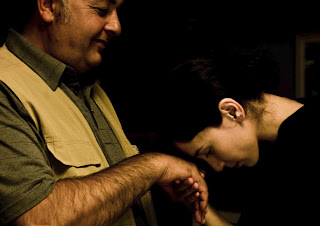 Die Fremde by Feo Aladag, the winner of the European Parliament's 2010 Lux Prize, will be hitting the screens here some time next year as When We Leave. A lucky few had a chance to see it on Monday evening as part of the new Europe House's minifestival.

It's a masterpiece. The story, you might have thought, would have been told before: a Turkish woman leaves her abusive husband in Istanbul and travels with her young son back to her family in Berlin, only to face the immutable codes of tradition and community which cast such a pall even on a seemingly ordinary and recognisable home life. All this is done with such painful sensitivity and in performances of often restrained realism. The cinematography captures the inner lives of the characters in mundane surroundings, especially during the blue light of the hour of the wolf and the dawn, celebrating the everyday without a false note.

Which is why the inexorable logic with which all too familiar family disputes unfold into tragedy is the more shocking. You could hear the incredulous gasps of the comfortable European audience at the entrenched attitudes which would separate mother and child, but you come to understand, if not entirely to sympathise, with the motivations of the protagonist's humiliated father and fearful mother. 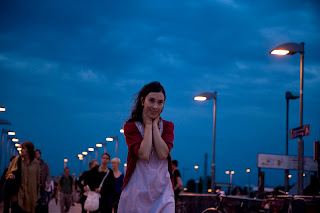 As this isn't yet released here - though already available on a German DVD with English subtitles - I won't say more about the plot except to note that the beautiful, dignified actress in the central role, Sibel Kekilli (pictured above), deserves every accolade. Watch the trailer (German subtitles only) below. You'll need to go fullscreen over on YouTube by clicking on the picture once it's started.

Diplomacy requested the removal of a central tranche here about the obscene adversaries of Europe House and their terrorist proposals (as well as the comments). So let's move on and wash away the unpleasant taste with a glimpse of the far from over-lavish reception for Maggi Hambling last Tuesday (all the following photos taken for the European Commission). 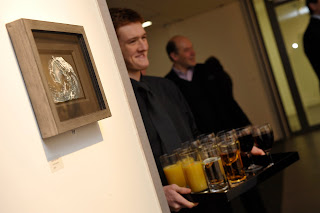 Maggi made a great speech, of course, though sadly I couldn't hang around beyond that because I had a class to teach. Here is the redoubtable lady by her biggest wave 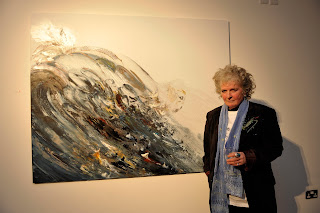 a few smaller ones 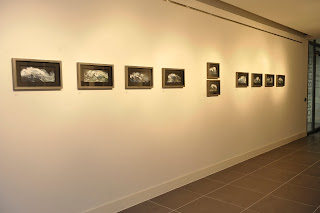 and the resplendent Andrew Logan, whose cufflinks I wear with pride. 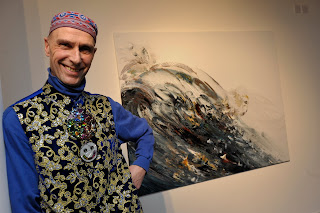 And so it continues. I missed the jazz concert last night, but I hope to be there for a discussion about Pinter in translation tomorrow. This in fact all came about because J asked the great man shortly before his death whether he thought the taciturn, long-pausing Finns would have a concept of what was Pinteresque. To which came the immortal reply 'fuck Pinteresque!' As Harold Pinter once said...
Posted by David at 10:42