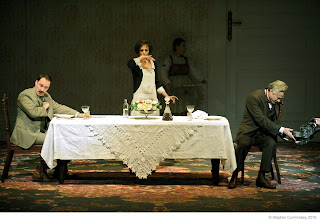 Glad I took up my programme-article prerogative of two more tickets to revisit A Dog's Heart, English National Opera's surprise hit of the season so far, on its last night. It was enough to confirm that the score isn't just a jumpy bag of polystylistic tricks*: some of the more pathetic ideas in the accumulating tension of the second act have lodged in my mind. And I do love the music for Sharik's dreams as well as the extra cut and thrust the splendid Garry Walker has been able to draw from his brass-in-ten-league-boots.

Performance-wise, Steven Page and Leigh Melrose (pictured above, with Nancy Allen Lundy's hyper maid, and below by Stephen Cummiskey for ENO) seem to have really wrapped their voices around those unkind, all-over-the-shop lines. And I'm sure the puppeteers had added detail to the uncannily realistic Giacomettiesque stray. Peter Hoare never seemed to have any trouble with man-dog Sharikov, a supremely touching and funny portrayal.

It was, in short, a trumph in every department, and won a deserved standing ovation last night (ENO audiences don't rise to their feet easily, though I suspect the Complicite fans probably do). I haven't enjoyed every Complicite show I've seen - least of all the Kharms nightmare Out of a house walked a man, which would have been 'out of a theatre walked a punter' if I'd been able to extract myself from the middle of a Lyttleton row - but, yes, Simon McBurney is a genius. I hope ENO can sign him up immediately to tackle Shostakovich's The Nose, long overdue a visit to the Coliseum. And hopefully this production will be back, too. 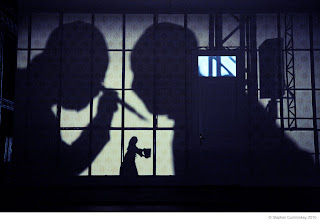 Setting aside memories of the vomit-inducing silhouette operation above, and parallel with the sybaritic tastes of Professor Preobrazhensky, we've been dipping into some of London's restaurants in the past week as seasonal gatherings accumulate. With, thank God, nary a line of tinsel in sight nor a piped Xmas carol in earshot. Fabulous discovery yesterday lunchtime of the unbelievably good and fresh food of the Spanish Casa Brindisa in South Kensington. 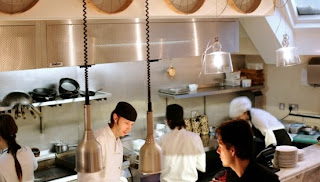 Best potatoes I've eaten out in a long time; the garlicky prawns and the bacalao (salt cod, like the Italians' baccala) with apple all tasted of themselves. Worth knowing, now that humble Daquise nearby has transformed into a pretentious Polish haute-cuisine (oxymoron) joint.

Earlier jollies were a Monday lunch arranged by my stalwart class monitor at the City Lit, Margaret Beaton, at Le Deuxieme on Covent Garden's Long Acre - for a lunchtime set meal, simple but tasty, this beat all the others we've tried, with superlative steak in pepper sauce - and a gathering of old Edinburghians 30 years on chez Julie's of Notting Hill. I've just read that this famous establishment, once a Sloane pitstop then a film-stars' haunt, was fined for claiming organic products when it was saving itself a fortune on unhappy chicken. Well, its nooks and crannies with a Marian theme were very cosy on a snowy, freezing night, and the eight of us who materialised in 'adverse weather conditions' had a whale of a time (sadly the hostess was stuck in Switzerland and couldn't make it), but the food wasn't great - though I can't complain about my lamb chops.

Where else might you try if you want to escape false seasonal cheer? My own favourites are two Italians - the unpretentious Rosso di Sera on Neal Street, run by Samuele and Igor from the Marche. It's one of the few of its kind where you really do feel you're getting good, straightforward cucina tipica as you would in Italy itself.

We were a bit taken aback by the huge portions at Bocca di Lupo (above) in the heart of Soho; I suffered from indigestion after eating too much there. But it was good quality, and of course the new Gelupo gelato bar over the road is ideal for doing as the Russians do and consuming your ices on the freezing streets. Salute!

*interesting that Grange Park doyenne Wasfi Kani, who said she didn't want to hear it again, was gainsaid by other, surprisingly articulate and sympathetic guests on BBC2's Arts Review, one of whom sagely pointed out that the music perfectly illustrated each and every character. Kirsty, meanwhile, told us about 'Bulgarov', reacted to Prof Carey's commendation of the coloratura prospective bride with illustration of Vassilieva barking through her megaphone, and this week issued an apology for misattributing the puppeteers.
Posted by David at 10:49

Horrified to learn about Daquise-for years a friend and I had preprom meals there,and we loved the fact that it never changed. Too bad,now it has. But I enjoyed reading your recommendations for seasonal-cheer dining. I feel sorely in need of this!

I think it may just about be tolerable at lunchtime, Paul. It's been taken over by some grand Warsaw establishment; in the evening it goes 'upmarket' with men in big chefs' hats and all sorts of unDaquise like frippery. Now we can be nostalgic for the old staff who were rude or charming according to how they felt.