The Sun King in winter 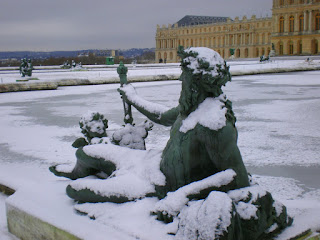 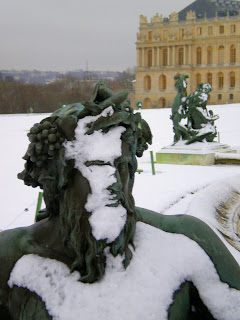 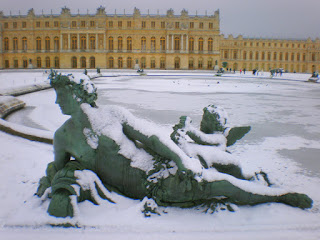 The gods and goddesses of his French rivers lay frozen and snowladen around the iced-over pools of the Parterre d'Eau's Grande Commande, just the start of the back-garden wonders Andre Le Notre wrought for Louis XIV at Versailles. I couldn't believe my luck at seeing them in this almost Narnian state. The last time we beheld Versailles was in an August heatwave, when only gentle cycling round the Grand Bassin relieved the general oppressiveness of a Parisian summer.

This, on the other hand, was the bleak winter morning after our treat at the Opera Royal, seeing Lully's Bellerophon in the theatre actually opened in 1770 during the Sun King's great-grandson's* reign - but even then, to celebrate the Dauphin's marriage to Marie Antoinette, Lully was still on the menu.

We checked into the cosy and wonderfully situated if over-decorated Hotel de France on a sunny Friday afternoon - the flight delays just beginning over at Heathrow - and walked over to the Hotel du Trianon on the edge of the park along icy streets. 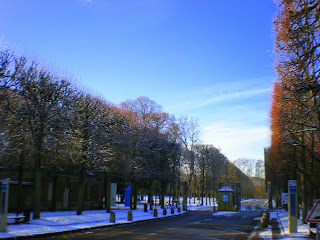 A gourmet lunch, an over-long tour of the Theatre followed by an all too quick but much better one (on a certain person's insistence) of the Royal Apartments and the Galerie des Glaces needed recovering from, especially as we'd been up at 4.30 in the morning. So that meant skipping, hmmm, lectures, napping at the hotel and arriving fresh for the Rousset experience. Which you can read about on The Arts Desk. Here's the chapel and the entrance to the wing which leads to the theatre. 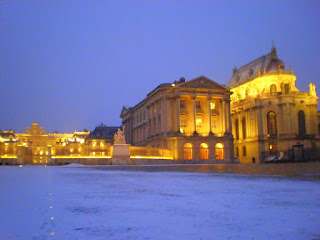 and here I am wondering what I've done to deserve being in a rather exceptional royal box - bang in the middle, unlike our own, and with voices and orchestra pinging to the back in exceptional wooden acoustics. 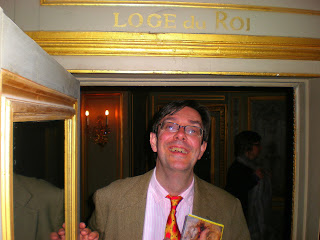 A professional shot of the theatre, lavishly restored to original specifications in the 1950s 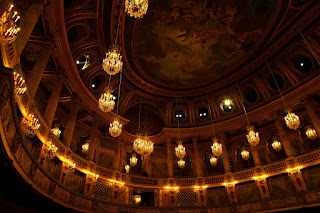 and cut to the next day, roaming at large in the snow. Bronze urns on the South Parterre 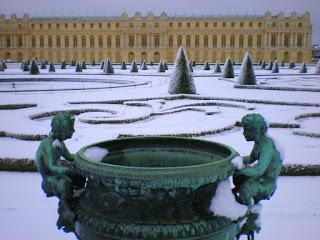 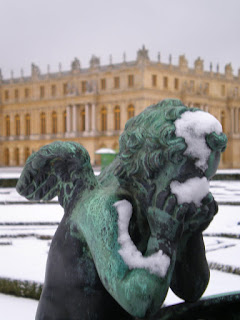 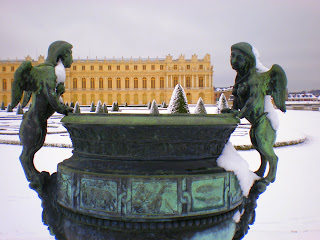 looking down on the Parterre du midi 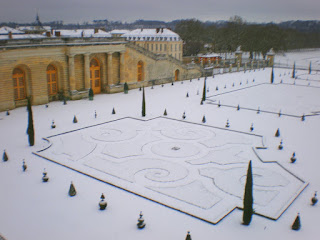 and west to the central avenue, Gaspard and Balthasar Marsy's Fountain of Latona in the foreground. 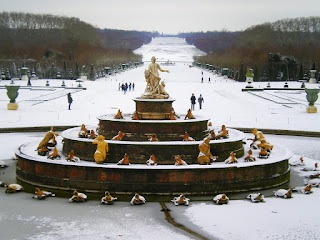 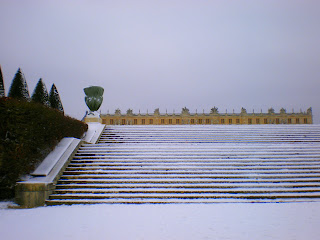 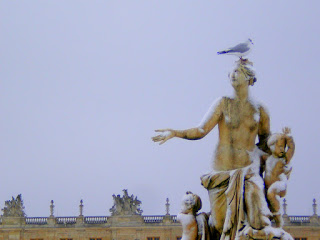 If that winter wonderland isn't seasonal enough for you, let's end with French music for the day. We were lucky to get prime seats under the dome of St Paul's on the afternoon of this grey Eve, courtesy of succentor friend Fr Andrew Hammond. Above us the organ thundered Dupre's naughty carol variations, and from the distant chancel the choir projected beautifully. A marvellous sequence, kindling Banstead memories of 'Gaudete', Mathias and Ord as well as introducing to me a couple of gems by Cecilia McDowall and Warlock. The tears flowed, though, for Poulenc's 'O magnum mysterium'. Partly it's because I only have to think of the Carmelites' 'Salve regina' when I hear any of Poulenc's religious music, but this is a piece of the very essence. Here it is sung by the Westminster Cathedral Choir. Joyeux Noel a tous!

*correct genealogy courtesy of Sir D Damant below.
Posted by David at 21:54

Dearest David and Dipolmate - you lead a charmed life. How wonderful it all sounds and though I envy you I also am constantly thrilled that you share it with us.

Will, Laurent and the "rats"

I won't deny it's been a charmed year, Will - after several shot through with a great sadness, if that isn't an understatement. Just in case everyone thinks life here is nothing but tussocks of pleasure. That, of course, is what we all aim for - but who knows what's in store?

Anyway, it's been a pleasure to get to know you, and a handful of other very human bloggers. More good than bad, as everywhere.

Versailles is quite a nice house, don't we think?

Louis XV was the great grandson of the Sun King. The Grand Dauphin and the Dauphin were carried off with small pox. Hence the long minority with the Orleanist Regent

At Covent Garden a Royal Box is constructed in the middle of the Circle for State Occasions. The permament box to the side is there for use when the Royal personages are not there in formal State. Louis XIV and his succesors were of course always in formal State

When Napoleon III was on a State visit Queen Victoria occupied the central box with the Empress Eugenie - a box empty of chairs as the Queen and the Empress processed in to the sound of the two national anthems. Then the Queen sat down, without looking round. But the Empress - arriviste of course to that level of royalty - did look round, to see that a chair had been placed behind her at the correct moment