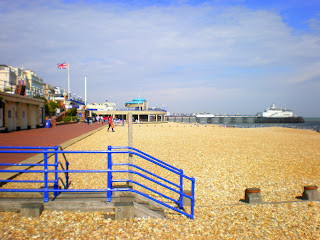 Melancholy, geriatric Eastbourne is where I liked to be beside the seaside as a child. The parents would drive down there about once a month on Sundays in spring and summer, and our rituals would take us from the Wish Tower Cafe, where a difficult friend of ours more recently fled the smell of incontinence on our last revisit, to the Martello Tower, the Lifeboat Museum, the bandstand and the Redoubt.

Returning there to catch the last day of the Ravilious(es) exhibition at the Towner Art Gallery earlier this month, I persuaded my companions to indulge me on a trip down memory lane. We'd done a bit of it when J was singing in a Carmina Burana up the coast with the divine Mary Plazas and a very competent school orchestra. But we hadn't retraced the old route. And I found nothing much had changed. Maybe the older generation is marginally less in evidence, and a few cafes along the prom-prom-prom serve espresso, but that's about it.

The 1930s bandstand, replacing the Victorian 'birdcage' original, was still in full working order. My old dad used to love this music (in fact the only piece I ever heard him hum was 'The Yeomen of England' by Edward German*). And it's still playing to the same sort of crowds (since I assume that the original senior citizens are mostly no more). 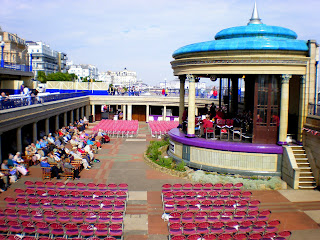 This time I had a little more admiration for the design. 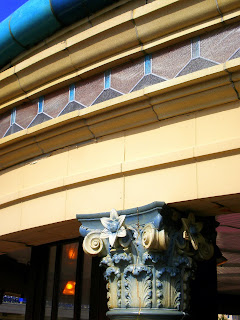 Incidentally, I can't remember where I recently read it, but Debussy apparently didn't actually compose La mer at the Grand Hotel nearby; he simply put some finishing touches to the manuscript. And he thought Eastbourne rather drab, though I must say the Duke of Devonshire's white stucco buildings and the gardens are a bit jollier than the post-bombing mess they made of Dieppe central.

On, then, to pay homage to the slot machines on Eugenius Birch's thousand-foot long 1860s pier 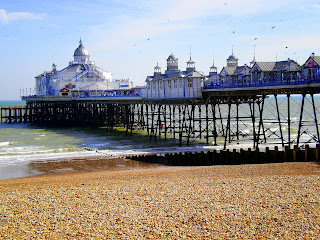 and along the East Parade to the Redoubt. Built between 1804 and 1812 as another protection against the Napoleonic invasion, it was always my favourite haunt as a child for what it housed - not so much the model village but a fantasy grotto, apparently mocked up in the early 1960s. What magic I found in its fluorescent fibreglass rock acquarium and its lilac-lit parade of Ionic columns and classical statues. All removed about a decade ago, the nice man in the military museum told me. Anyway, the Redoubt itself has been handsomely restored to something like its original state, and was completely untouristed when we arrived in the mid-afternoon. 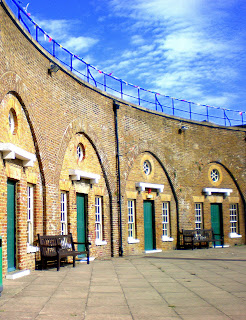 The attendant also persuaded me to buy a little clutch of heritage walk leaflets, not by any means wasted as I wanted to explore one area I hadn't seen as a child - the old town which preceded the rail-inspired bathing resort by many centuries. There's not much to see there, and it's quite a hike inland, but worth it for the church. We approached via the posh Victorian west end and the grandiose town hall ('free renaissance' says Pevsner). 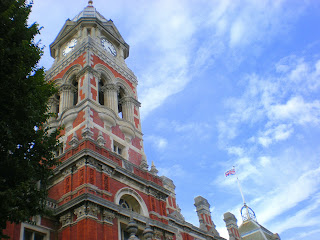 St Mary-the-Virgin, on the slopes of the Bourne stream, has suffered from - or been saved by, depending on which way you look at it - Victorian restoration. Still, it's a much-loved place of worship with a healthy 50-strong choir, we were told. The Norman nave yields to a very wide and large chancel with romanesque-style capitals. 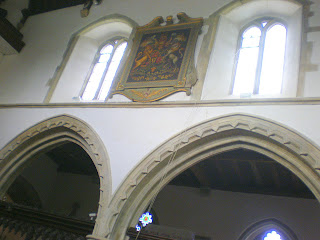 In the Gildredge Chapel there's a very fantastical, blow-dried St Michael conquering the dragon by Hugh Easton, made after the 1943 bombing. 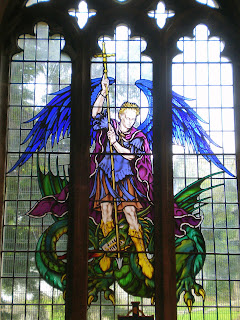 The church's most fascinating memorial commemorates the untimely death of Henry Lushington, who survived the Black Hole of Calcutta by drinking his own sweat only to be 'deliberately and inhumanely murdered' in Patna at the age of 26 by 'the Nabob Cossim Ally Kawn'. His parents erected a bust by Sir Robert Taylor above their long and loving inscription. 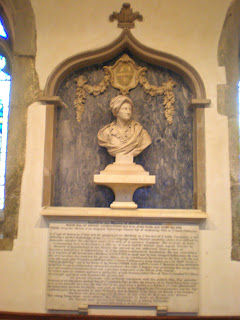 Outside, the church with its massy 14th century tower is complemented by an adjoining 16th century rectory manor. 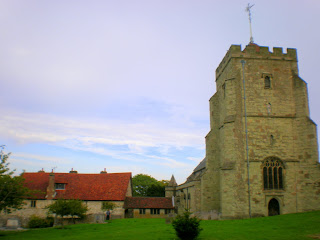 There's not a lot of medieval building to be seen in the vicinity, so we headed down to the pretty Motcombe Gardens and a house opposite where an iron silhouette marks the home of the very late, great Tommy Cooper (!) 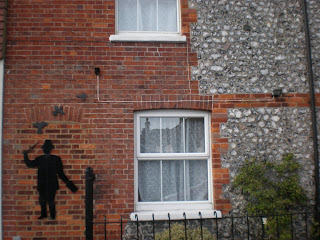 And just like that we were back at the station for the return train to London.

*Talk of the devil and here it is. I never thought to hear the tune my father never sang beyond the first line, and always studiously avoided an LP of Merrie England in the local library. But in the recently recreated Prom Last Night of 1910, there it was from the very unlikely, and now rather knackered, vocal chords of Sergei Leiferkus. The rendition is idiosyncratic, to say the least.

If you want less bizarre diction, Peter Dawson can be heard on YouTube too. But a minute and a half is quite enough for me. G&S's Yeomen of the Guard - now that's quite another matter.
Posted by David at 15:05

How appropriate the window of St Michael on his Feast Day - you did that on purpose didn't you?

Pure serendipity, Will, I have to confess - I need to check out the saints' days on your site. So it's Michael AND the Archangels, right? Reminds me of an October visit we made some years ago to his grotto at Monte Sant'Angelo in the Gargano.

Oh no,another illusion shattered-I always enjoyed telling people that 'La Mer' was written at the Grand Hotel.
The 'Yowmen of England' was a favourite of my father's-specially for bathroom singing. Mr L's version was a proms highlight-of a kind.

Well, Paul, I couldn't find the witty article which exploded the myth, but another confirms that what Debussy did during that summer month with Emma Bardac was to adjust La Mer's orchestration and correct proofs. So in a sense he did 'finish' it there.

The Grand Hotel has a room which they think was the one used by Claude-Achille.

Thank you for the piccie of that extraordinary window. A kind of seraphic
Marilyn-on-the-grating moment. It reminds me of that classic Peter Cook and
Dudley Moore sketch, where PC is Arthur Shepherd, who had been watching his
flocks by night, and DM is the reporter Matthew from the Bethlehem Star. It's
priceless. Of the angel's wings, 'I have never seen such a pair, on a man'.

Check out Breughel's or Bermejo's St Michael for a really lovely pair.

Drop a gilded onion dome on that town hall tower and you'd have a good example of nineteenth century Russian Renaissance Revival. Although it sometimes gets to be a little too much, I have a soft spot in my heart for Victorian exuberance.

I WAS going to comment appreciatively and intelligently on your lovely guide to this sedate seaside town... till I got to the comments. Must now google various seraphic "pairs." And this Saint Michael does look as if he's been to Vidal Sassoon recently.

Welcome, Elizabeth and Andrew, and good to see you back again, Will. Let's hope your (and my) Victorian penchant doesn't lure Sir David out of the woodwork to fulminate - though on second thoughts, let's have a friendly spat!

Looking at Bermejo's St Michael, one of my favourite paintings in the National Gallery, I see the wings aren't quite as spectacular as I (mis)remembered. But the crystal shield and the bitsnpieces devil-monster are both fabulous.

More good wings on the angels in Cavallini's Giudizio Universale in S. Cecilia in Trastevere, which Willym has no doubt visited. Only viewable on select days with nuns to guide you.

I see no reason for a spat, no reason indeed for a disagreement. There is nothing wrong with enjoying Victoriana but one hopes it to be agreed that that era encapsulated a decay of taste, and a decay in the right approach to the human predicament ( except of course for Russian literature). A lot not a little too much. Thank goodness for Picasso, Betrand Russell and others who blew the whistle

One fears that today St George would be prosecuted for killing a member of an endangered species. St Michael might be granted Seraphic immunity.

Re Victoriana, well, generalisations are always tricky, aren't they? In the round, you may be right. But I'm sure we can all come up with our own candidates making the same exception you claim for Russian literature (I can think of several, but I won't bore on now).