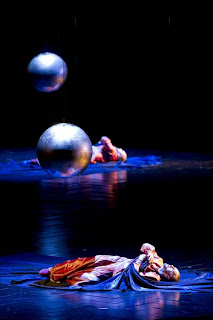 Good in parts is the best I can clergically say for everything I've seen in the last week - except Alvin Ailey's troupe, that is, which was wholly inspirational in terms of the execution, though even there the choreography could be dodgy in places. No need to recap on Jurowski's fascinating Mahler 3 with the oh-so-slow (but still oh-so-well-played) finale nor Gergiev's horrid Shchedrin and masterly Musorgsky-Ravel; both I've written up on The Arts Desk, so click on those links if you want to read further.

I must say I wondered if I was going to agree at first with colleague Igor's rave about Niobe, Regina di Tebe at the Royal Opera - and I went because of his review and what a charming student, Caroline Kennedy, had written about it. I detected only three and a bit signs of blazing originality in the hitherto-obscure Steffani's first act, chiefly the string revolutions of the celestial spheres observed in his Palace of Harmony by King Anfione (the self-styled Polish 'soprano and tenor' Jacek Laszczkowski, pictured above by Bill Cooper, who took the Royal Opera shots it's now OK again to feature on blogs, thanks to all the comment fuss over at Intermezzo). There were also an irregular, dancing ditty and a quirky lovesong respectively for secondary lovers Tiberino (Lothar Odinius) and Manto (Amanda Forsythe). 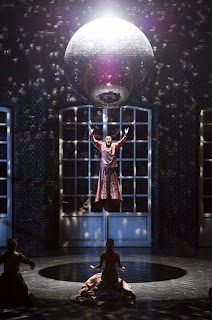 and his consort Niobe (Veronique Gens) sported in equally illusory fashion with the false Mars of Creon (Iestyn Davies). They get a gorgeous duet and a levitational scene with floating balloons which worked its way into my dreams last night. 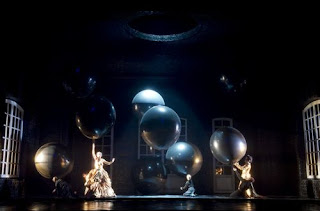 The fascination of the mangled myth, so horrifically treated in Ovid's Metamorphoses (I re-read the Ted Hughes translation before going to sleep last night), takes over for the closing scene. The would-be divine consorts have their hubris duly punished; their children are slaughtered, Anfione stabs himself and his life leaks away in an extraordinary chromatic death scene that peters out, while Niobe turns to stone in an even sparer number that also has no chance to conclude. Gens turned in an exemplary, fashion-plate Niobe, inspected here as a golden statue by Tiresias (Bruno Taddia) and nurse Nerea (Delphine Galou). 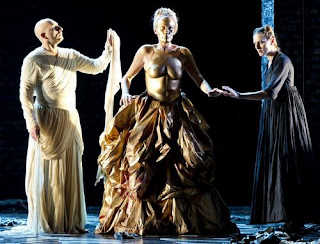 With the exception of Laszczkowski's erratic vocals, more than mitigated by his handsome charisma, the cast was outstanding, with Davies (seen here in his iffy get-up with Alastair Miles's Poliferno in tow) the most stylish of the lot. 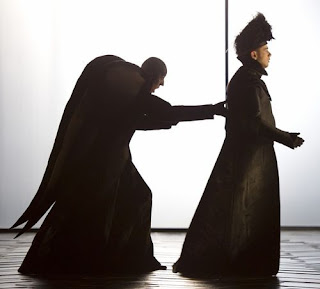 The vitality which suggested that perhaps there was more good music in the work than is in fact the case came from Thomas Hengelbrock and his electrifying Balthasar Neumann Ensemble. O numi, o ciel, the second barockfest I've enjoyed in a month - what's come over me?

Whereas David Alden's production of Janacek's The Makropulos Case at English National Opera was a known quantity, one I'd been stunned by when Cheryl Barker took on the role of the 337-year-old diva heroine first time round. I thought this was going to be just as good: Richard Armstrong proved both precise and headlong stepping into the late, great Sir Charles Mackerras's shoes; Amanda Roocroft caught the playful side of Emilia Marty's bizarre historical perspectives very well in the first two acts and pierced the soul in her asides about her dried-out life (photographs for ENO by Neil Libbert). 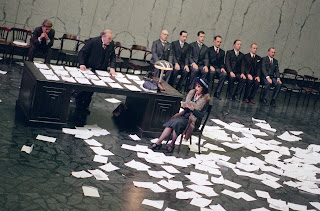 The great final scene, however, lacked for me both the cosmic perspectives opened up by Anja Silja in Nikolaus Lehnhoff's Glyndebourne production and the sheer vocal allure of Barker last time round (Roocroft can't always be heard, and you never know whether the sound above the stave is going to come out frayed or spot-on). 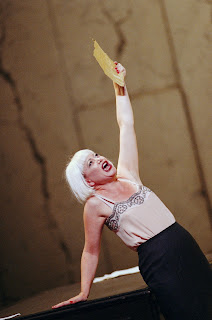 Plus there's the problem of the way Alden stages the end. I take his point about the men who've always dictated the way E.M. led her life, and I liked the use of the blackboard to spell out the complications of the legal case, the simplicity of the essence ('Makropulos' in Greek) and the algebra of the immortality potion. But the supposedly spectacular coup of the formula sticking to the heroine's hand at the end won't do.

I discussed this with the City Lit students last night (we're spending five weeks on the opera). They're an open-minded bunch, and fans of Jones et al for the most part, but they were surprised when I read them the stage directions: 'Krista [the young girl previously infatuated with Marty's divadom] takes the document and holds it over a flame until it catches fire. Stage lighting changes to red. Marty: Pater hemon [Our Father, not translated at ENO]? (crumpling up). The document is consumed in the flames'.

What's more, we hear the flames in the music. But the way Alden played it out, the ending was indeed as nihilistic as Igor found it. No liberation from the hell of everlasting life, no purification. That has to be wrong. At least we got real fires (and how) in Niobe.
Posted by David at 08:47

As I may have written here previously, I also like Miss Barker's E.m., and regret that another blogger, Mr. Robert Hugill, who also liked the Steffani,does not share my enthusiasm for her. I also have the Decca recording, but have spent very little time with it since the Chandos came out. It is that latter recording which won me over to the opera! I still have yet to warm to the _Vixen_, and do not yet know Kata, as again I may have previously written here.

The earlier recording is still supreme - I listened to a chunk of it without the libretto to hand, and was amazed how vividly Soderstrom projected every nuance. And of course the sound and the Vienna Phil's playing are finer.