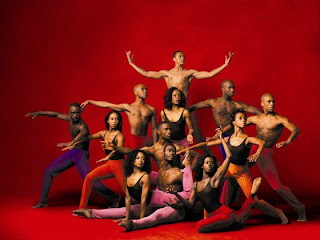 Had to see the second programme of the Alvin Ailey American Dance Theatre after last week's revelation(s), and it confirmed for me that this is one of the very local wonders of the world, like hearing the Glinka Choir of St Petersburg, Wagner at Bayreuth or the Lucerne Festival Orchestra. Another performance of Revelations, another cast, with seemingly effortless balance from Constance Stamatiou and Antonio Douthit for 'Fix Me, Jesus' and a moving-to-tears solo from Amos J Machanic Jr in 'I Wanna Be Ready'. Yes, it's a masterpiece, a 50-year old classic that's anything but ossified. And it converted my companion to the belief that modern dance really could express the depths of the human spirit, as his grand criterion for Great Art has it.

I learned a lot, too. Judith Jamison's Hymn (company pictured above by Andrew Eccles) to her predecessor and founding father, the great man himself, does something that may well be commonplace in the contemporary dance world, but which I've never come across before. They dance, in places, to the spoken word alone, with only a minimum of mime. As someone who's fascinated by the potential of speech melody in Janacek and Steve Reich, I found this balletic equivalent enthralling. 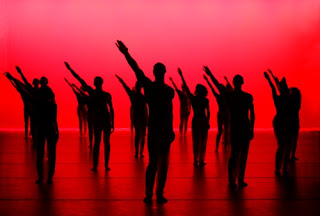 OK. so the score by Robert Ruggieri isn't up to much, and the documentary speeches of company members are a little stagily narrated by 'actress/raconteuse' Anna Deveare Smith (the volume, which could have been reduced by at least 20 per cent, probably made her contributions sound unnaturally harsh at times). But there's certainly melody in her declamation, and when the music stopped and several solo dancers just expressed the text, it was thrilling. I liked most of all Khilea Douglass's solo 'The Mask', about a dancer's reflections on her grandmother in Africa. My Arts Desk colleague Judith Flanders was a little tougher on the overall impact, but she loved the rest.

No solos on YouTube, but here are a couple of minutes of the company in action (go fullscreen for symmetry):

Anointed, choreographed by Christopher L Huggins, struck me as amazingly complex dance to monotonous music (by Moby and Sean Clements), a score which only served as a clean slate to write on. But I did a double take when halfway through a poetic Pas de Deux, the female dancer lifted her male partner and held him in perfect poise. It didn't happen again, but it was a moment of did-I-really-see-that magic.

And my evening was enhanced by meeting South African-born dance enthusiast Pami Preller, who's been to all the performances and still finds something fresh and extraordinary, a panache and an equilibrium which she reckons even the Royal Ballet can't quite match.

Anyway, you have until tomorrow night to catch a phenomenon in action at Sadler's Wells, after which you can see it on tour.
Posted by David at 11:15

Strangely I am translating a review by an Italian critic of the Ailey Company at the moment and as always getting bogged down in the verbiage. Dearest David I only wish they had both your clarity of words and viewpoint. Again you make the moment live for me. 1000 grazie.

Thank you, Will, and I hope you don't have to translate Italians' essays for art exhibitions - boy, are they long-winded. Never one word when a thousand florid adjectives won't do. And to think I have trouble with the length of MY sentences and my fondness for subclauses...

Here is a doubter converted to dance by Ailey, though I would want the music to be of the same standard as the dance, creating a gesamtkunst. This was true of Revelations and other sections of the programme, though not all.

Committed balletomanes often seem uninterested in the music - I have seen a review of a new ballet in a significant newspaper which did not mention either the music or the composer.

David, your prose is excellent, even in the eyes of a logical mind such as mine. The strength of the structure is that it reflects a spontaneous enthusiasm, quite apart from the content

Thank you, David. By the same token, a great deal of ballet music is overlooked by classical buffs as not really serious: but listen to the art which Delibes, Massenet et al poured into their dances - absolutely first rate.