Dancing with Nina and Otis 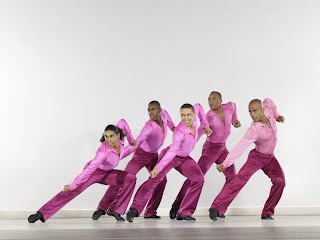 Simone and Redding - they have to be the greatest in putting across a song with abandon, don't they? To make high art out of choreographing them is the biggest challenge, but I can say with some euphoria, as a virgin to the company, that the Alvin Ailey American Dance Theater rises to it with unflagging energy. Some time ago I asked our friend and dance lover Liz Holt to tell me what for her was tops. This was her answer, and she proved it by taking me to see the AAADT at Sadler's Wells last night.

My colleague Ismene Brown on The Arts Desk can tell you in more eloquent detail than I why most of it worked (and a little bit didn't, quite). But I want to splurge a bit of enthusiasm, so here goes. Suite Otis (gents pictured above by Steve Vaccariello) bursts on us pretty and vibrant in pink, some 40 years since George W Faison created it. It's not just the exhilarating blend of classical dance with moves and wiggles more associated with the great man's hits that made such an impact; I just loved the individuality of each ensemble dancer's expressions - pride, humour, haughtiness, anger, you name it. Really charming cheek-to-cheekiness from the doe-eyed Ghrai DeVore and stocky, charismatic Guillermo Asca; a final sweep of euphoria to Otis's greatest number that I know of, "Try a Little Tenderness". We have to see him performing that in 1967

and here's a mere minute or so's snippets of Suite Otis. NB: some of these clips are widescreen, so best to click on the moving image and view them on YouTube.

Plotless contemporary dance can be a bit baffling. I felt that about The Hunt, despite the incredible unflagging energy to some over-amplified drumming, and Dancing Spirit, though I found the music by Les Tambours du Bronx compelling. In a charming Q&A afterwards, charismatic artistic director designate and choreographer Robert Battle, an articulate and natural speaker, suggested we just go with it, try and see it again and put our own story to it, which might be more interesting than what he'd thought of in the first place.

Whatever the tale, no-one could fail to respond to the most visceral male dance solo I've ever seen, the phenomenal Samuel Lee Roberts's to Battle's In/Side, a whirling chronicle of pain to Nina Simone's 'Wild is the Wind'. This amazing photograph is by Paul Kolnik. 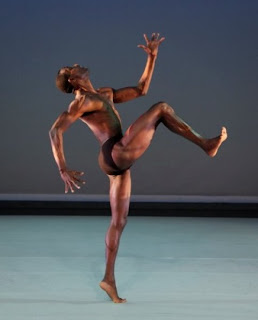 What I didn't realise until I dug out the Nina album with the song on it is that it was composed by the famous film composer Dimitri Tiomkin, one-time student of Glazunov at the St Petersburg Conservatoire and of Busoni in Berlin. What a link!

And finally, the signature piece, Ailey's own Revelations. Half a century on, the company fill it with feeling, virtuosity and enthusiasm, performing it as if it were a new piece - which, to many in the theatre like myself, it was. Let that never be forgotten by any artists performing what they think is familiar repertoire - to many, it won't be. All of this long spiritual symphony can be seen on YouTube, so I give you just the opening number 'I Been 'Buked'

and the roofraising finale, 'Rocka My Soul in the Bosom of Abraham'.

You ought also to see the very beautiful 'Wade in the Water' sequence, too, but there I'll use a couple more classy images. The last three are by Andrew Eccles. 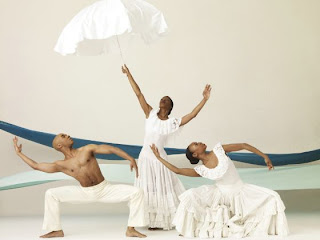 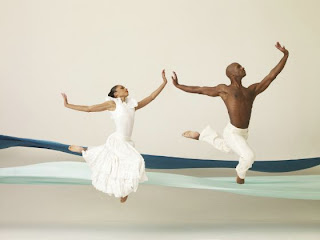 Must have just one more, of the leaping men in 'Sinner Man' (different from the three I saw, who included Samuel Lee Roberts spinning dizzyingly again) 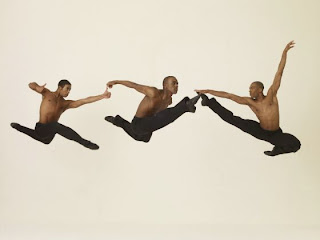 With a wild reprise of 'Rocka my Soul', a standing ovation was never more deservingly won. Good luck to Battle as he takes over from the remarkable Judith Jamison next year. And don't miss the two programmes running at Sadler's Wells until 25 September if you can get a ticket.
Posted by David at 11:56

Hi David, its great reading your response to your 'first' Alvin Ailey experience and also chatting to you (and other David)at interval and on the bus this evening after your 'second'. I'm afraid once your soul's been Rocked in the Bosom of Abraham there is no going back... you have been touched by magic! See you at all their next performances, Pami Preller.

Thanks, Pami, and what a pleasure to meet you last night. I feel another word here about the words+dance experience of last night coming on.

And do let me know what else you think shouldn't be missed in the dance world. I'm a novice, as you know, but learning fast.