More light on Ravilious the Younger 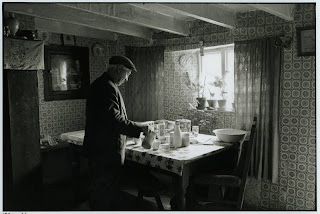 Looking for copyright permissions in trying to put up a few of James Ravilious's Devon photographs when I was writing about the Towner exhibition of his and his father's work, I started by contacting the Beaford Archive. Gracious permission came a week later, and then I realised that the chief image I wanted didn't come from that source. So I wrote to the James Ravilious website, and received a very personable reply from James's widow Robin.

She told me that the 'View towards Iddesleigh and Dartmoor' I'd loved so much was taken on a large plate negative. Reproduction on this small scale probably doesn't do the photograph many favours, but I include it with Robin's copyright all the same. 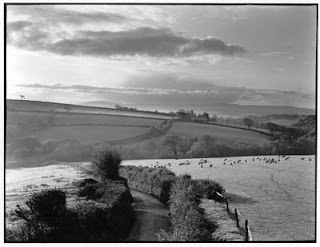 Robin added: 'This was very much a favourite view of James's, and one of the two images he was proudest of (the other being the one of Archie on the cover of An English Eye)'. That I included in the previous entry, but it's worth adding a few more photos (the Beaford Archive website has six galleries' worth). In addition to the lovely image of a farmer at his window above, here are Archie and Ivor Brock moving a sick ram at Dolton 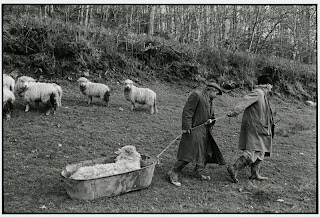 and Archie out in bad weather again, with his dog. 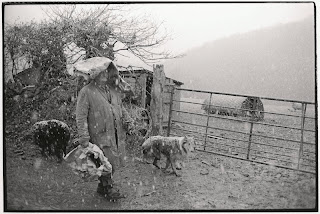 Still on the English theme, I took goddaughter Evi to look at the galleries of the Imperial War Museum, since we were in the area. The current selection, Breakthrough, has one Eric Ravilious, the watercolour Room 29, Home Security Control Room painted a year before his plane was shot down on a mission to Iceland. But the real surprise was Paul Nash's strange depiction of the Battle of Britain, the 70th anniversary which is of course being commemorated right now. I have a feeling the meanders depicted might be those of Ravilious's beloved Cuckmere Haven, though obviously nothing is on a realistic scale.


In the room at the end, devoted to the work of the Royal Army Medical Corps, were strange and moving pastels by Austin Osman Spare, including a giant canvas with the half-destroyed Ypres Cloth Hall in the background. But what stunned me, as ever, was the masterpiece in the 'Hall of Remembrance', John Singer Sargent's Gassed, and the complementary scenes by Stanley Spencer and the Nash brothers.
Posted by David at 11:48