Every costume tells a story 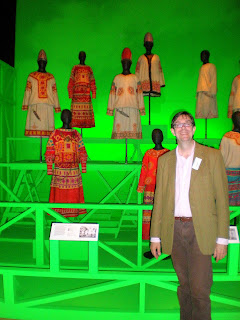 And in the Diaghilev and the Golden Age of the Ballets Russes exhibition opening on Saturday at the Victoria and Albert Museum, it's not just the familiar story of The Rite of Spring's notorious opening night (Roerich's designs pictured above, with extra dummy). We had the rare pleasure of a preview tour around the show by the V&A's Director of Theatre and Performance, and co-curator of this exhibition, Geoffrey Marsh. So affable, enthusiastic and un-self-important was he that he pulled us up short when he told us how he'd canvassed for this or that costume, attempted to buy some vital sketches at auction or gone to extreme lengths to get an old Russian recording of a folk singer much admired by Stravinsky.

Diaghilev retrospectives have never been thin on the ground, though the last big one at the Barbican turns out to have been 14 years ago (it was at a talk there that I met our now dear old friend Ross Alley). But I was more thrilled by this one than by any of the others. Already, as we entered through the back route, I caught a glimpse of the vast forecloth for Le train bleu, Picasso's celebrated image of the two big-armed and -breasted woman running down the beach. You can see them behind his costume design for the Chinese acrobat in the epoch-making Parade. 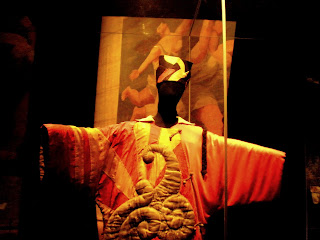 That canvas is huge, of course, as is Natalia Gon(t)charova's backdrop panoply of onion domes for the 1926 revival of the pioneering Firebird. Both are owned by the V&A and simply can't be displayed other than in exceptional circumstances like this: if anyone has the right space for the Gon(t)charova, Geoffrey would appreciate a call. 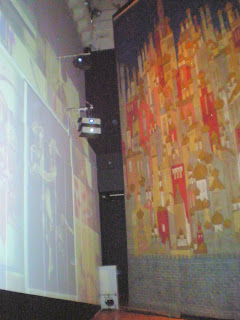 It's discreetly lit in a giant space flanked by clever films of a silhouetted firebird spinning to the infernal dance. 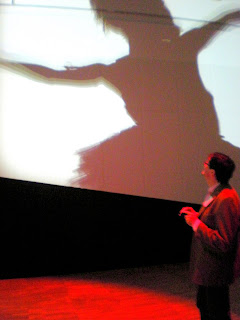 Incidentally, I was pleasantly surprised to find that the BBC website still has up and running the film of last year's pre-Prom Stravinsky discussion chaired by Chris Cook in which I get to exchange ideas with the admirable Stephanie Jordan.

Anyway, the visual aspect of the show is done with all the panache you'd expect from the revitalised V&A (and a bit more than the not-quite-as-bad-as-usual Proms backdrop above). And what costumes they have, either original or lovingly remade. Standing out in room one is a Bakst cossack from Thamar in 1912, complete with pockets full of cartridges. Geoffrey told us they'd heard from a lady in Wales whose mother had been a Georgian princess of the same name as the ballet's bloodthirsty heroine, and in the days of the great Ballets Russes costume sales, her husband had bought her a clutch of costumes. Most had been eaten by moths tucked away in an attic, but this one survived and has been spectacularly cleaned (no image here as yet; you'll have to see it for yourselves).

Some tough decisions had to be taken. Nijinsky's costume as the Spectre of the Rose wouldn't do, because most of the roses had been removed and the tights would prosaically remind us what thick legs he had (rather like Nureyev). See for yourself in this photograph from 1911. Sadly it doesn't catch the famous leap through the window, so poetically described in Tony Tanner's one-man Diaghilev show at the Edinburgh Festival Fringe.


A fun story attaches itself to Cocteau's caricatures of the impresario dressed up as the lady in that ballet and a prancing Nijinsky as the object of his/her admiration. They'd been put up for auction at a ridiculously low £800, Geoffrey went along with the cash - but the first bid, from choreographer John Neumeier, came in at five figures, so that was that. Neumeier has, however, loaned to the exhibition, as have all sorts of collectors and Russian plutocrats.

There are the expected Bakst designs, Diaghilev memorabilia, models and useful little films, all punctuating the rooms in a noisy melee which will presumably sound less distracting once the space fills with crowds. The costume displays are the thing, though, and very tellingly placed. Apart from the Sacre room with its billowing green clouds and films of alternative choreographies, I especially liked the juxtaposition of Bakst's return to the 18th century in his costumes for the 1921 revival of The Sleeping Beauty with flower-power Larionov's designs for Chout, that Prokofiev masterpiece about the buffoon who outwitted seven other buffoons. Last June, I put up a few of Millicent Hodson's and Kenneth Archer's design-reconstructions, so it was very exciting indeed to see them realised in the shape of the fantastical attire for the buffoon and his wife here: 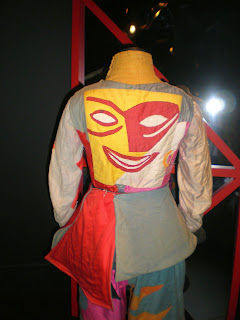 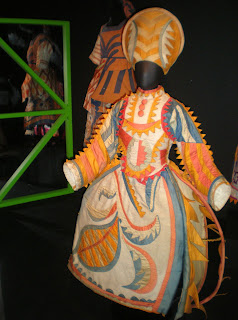 And what about Matisse's vision for Le chant du rossignol in 1920? Again, a costume ahead of its time. 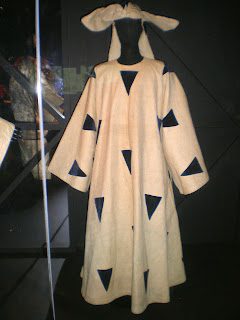 I'll certainly be returning to examine at leisure. But yesterday morning, I spent some time in the V&A's theatre and performance rooms, a zone I'd never visited since the demise of the Covent Garden Theatre Museum. There was a splendid little exhibition of even more futuristic work by Edward Gordon Craig who created many of his strongest theatre designs in Moscow. And in the free selection of designs here, who could resist Dame Edna's Sydney Opera House hat for Ascot? 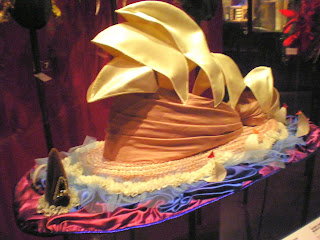 The London Design Festival is also pervading the already giddying spaces of the V&A this week. Nothing quite as comprehensively wonderful as last year's diplo-mate-encouraged In Praise of Shadows, and I didn't come across many of the buried objects, but on Sunday we did admire Michael Anastassiades's pendulum light amid the rococo of the Norfolk House Music Room. 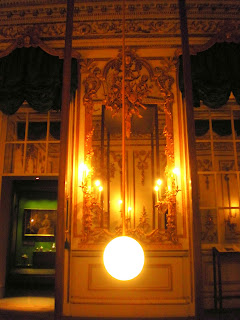 And there's Oskar Zieta's Blow and Roll in the Madejski Garden. 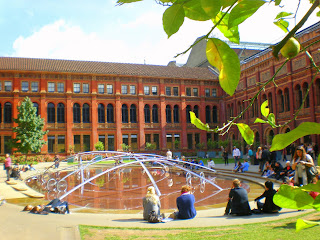 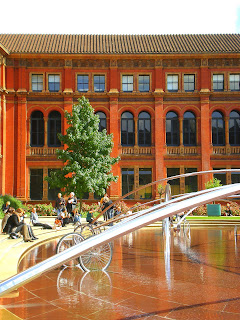 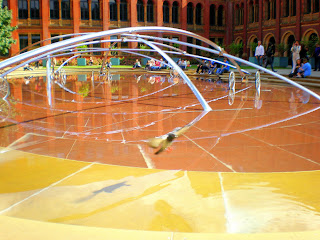 I'd say I'm only touching the tip of the V&A iceberg. It's at least half a dozen major museums rolled into one. What a lifetime's resource to have on the doorstep.
Posted by David at 10:25

You make me so envious. When I saw this was coming up I tried to find some way of getting over for it. I may just yet because in words you make it sound as fascinating and wonderful as I hoped it was going to be.

You should...if I knew what I might be missing and I was elsewhere, I'd be here like a shot. Why not catch Adriana Lecouvreur with La Gheorghiu at the same time?

It may be necesary to have very thick legs if one wants to be able to hang in the air apparantly defying gravity. Apart from Nijinsky and Nureyev there was this summer from Russia the 21 year old sensation as Spartacus. Less beautiful, in the eyes of some, perhaps, but fit for purpose to use that dreadful modern phrase

Yes, Ivan Vasiliev: doesn't need much talking up to be the next Nureyev (not that I ever saw the latter except in a veteran mime role). But if you're after lovely legs, watch Roberto Bolle, the World's Most Beautiful Man IMO, in the Royal Ballet Sylvia.

I can only say that this exhibition is unmissable. But go by yourself. More that most exhibitions ( though it is true of most) there is so much detail to see that trying to pace two people at once just does not work. Also make sure you see it all, as it ( where the rooms are) is not too clearly labelled ( and relevant things on sale are also round a corner and not in the main V & A shop)

What a galaxy of talent. Almost unbelievable.