Before the little black dress 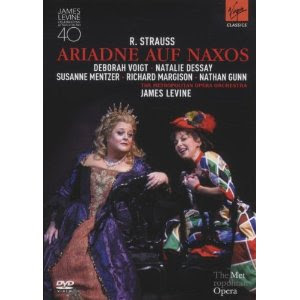 Shouldn't be pre-empting my BBC Music Magazine review of the Met's 2003 Ariadne on DVD, but I did want to say how it made me do a volte-face on Deborah Voigt. I'd always thought of her as a useful dramatic-lyric with a rich middle range but a rather frayed sound up top. Not here, where she is as good a certain type of Ariadne - the statuesque post-Jessye Norman variety, rather than a psychologically interesting one a la Anne Schwanewilms or Petra Lang - as I've seen.

This was, of course, in the days of the big Prima Donna before all the kerfuffle about fitting into the little black dress demanded by Christof Loy's production at Covent Garden. She lost weight and came back four years later, supposedly in triumph (though at that stage I was too sniffy to go and see for myself). I guess just about every opera queen/lover has seen the very witty little film about the situation, but here it is for good measure.

Yes, Debbie does comedy. And she did it superbly back in 2003 throughout Strauss's desert island opera (my own, too, perhaps, when the singing's as good as this), looking like some Dickens comic caricature in the Prologue and rolling her Buzz Lightyear orbs at the brilliant business of Natalie Dessay's perfect (and perfectly human) Zerbinetta. I haven't encountered Voigt much since, but I have heard that the sound has lost its luminosity, which would raise the big question: would you rather see a fat lady sing superbly, or a thin lady more realistic on stage even if a bit less lustrous vocally? I used to think the latter, then I changed my mind when I saw Jane Eaglen's Tosca in her heyday - Robbie Coltrane in a hideous orange wig, but such sound, and such acting with the voice alone. For Ariadne c.2003, anyway, Voigt was ideal. And she always could act, and hold the stage, and make people laugh.

Another tenuous link, but since it's heading the Met's way, I should add a word or two about Des McAnuff's new ENO production of Gounod's Faust. My sharp-witted colleague Igor Toronyi-Lalic on The Arts Desk said it all for me: no point expending Relevance on an operatic treatment of the Faust story which has all the probing intelligence to be found in an episode of Sunset Beach. And it was a mess, and it didn't read, and mostly (apart from the video projections, especially the flowers, seen in the below production image by Catherine Ashmore) it looked horrid. 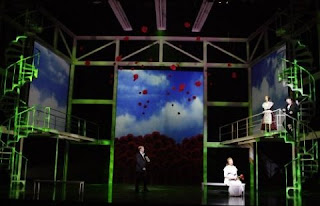 But it was well sung and conducted. The chorus, as good as the orchestra given Ed Gardner's inspiring lead, raised a few goosebumps. The heft that I noticed in Toby Spence's brilliant concert performance of Don Ottavio's 'Il mio tesoro' a few years ago continues, with all the tricky top notes ringingly intact. I liked Melody Moore's Marguerite, convincingly developing from chaste young girl to tragic single mum, and the sound is warm, if not quite blossoming above the stave. And Iain Patterson is a fine singer, though as a baritone miscast as Mephistopheles. Goddaughter Evi got it in a nutshell, too: wasn't the music all too pretty? Where was the demonism her mum so loved in the Berlioz? What did all that science stuff have to do with this opera? So we agreed: it was an OK evening, just not great.
Posted by David at 10:45

Well, that's alright then? Not in my world. Cardinal Bertone's remarks I have read in full quotation, not paraphrased, and I would say that making such remarks is as close as I know to any definition of evil short of murder. It has caused me great distress in the past to have this equation made casually in my presence.

And it was Ratzinger I was quoting when he described homosexual feelings as oriented towards a moral evil (I'd quote directly if I had the time), not the act.

I think we know where not acting at all on sexual feelings leads (not the same thing as continence). In the real world, at least.

And I have now managed to read the document produced by the present Pope in his position as prefect of the congregation of the faith about homosexuality, and while I'm not surprised, it makes pretty sick reading to me. See S Fry on the church's attitude to sex as being like that of bulemics and the morbidly obese to food.

Anyway, the man is gone from our shores for the time being, leaving us in Mr Cameron's diplomatic words much to chew over, so can we get back to little black dresses now?

Back to the little black dress.I had already earmarked the new Chandos recording with Brewer for the shopping list. Do I need this new DVD as well/instead of? Or is that a pre-emptive question?

Oh, both, Paul, both, if you love Ariadne as I do (though all very well for me as I didn't have to buy 'em). That Brewer Ariadne got a five star rave from me, should be out in the next BBCMM. Armstrong proves a surprisingly good substitute for Sir Charles and turns in a lovely Bourgeois Gentilhomme Suite, too. Gillian Keith isn't quite in the Dessay league, though everyone else does a fab job and Alice Coote is of course very classy. Plus you get Stephen Fry as the Major Domo and a very elegant translation.

Both it'll be then.We 'Ariadne' addicts need our fix.

If it is not too vain, I refer Mr Roderick de Lacey Staunton [ can that be a real name? It is so appropriate, indeed splendid - straight out of the common place book of Monsignor Gilbey] to my contribution in this Blog of 16th September. The Church - indeed the churches - are just wrong on sex, for the reasons I mentioned in the earlier comment. And the tragedy is that as a result the Revelation of the Incarnate Christ is clouded and disguised by the preaching of primitive taboos.

Who can listen to the Jewel Song and not think of Bianca Castafiore ?

Only those of us who heard Joan Sutherland sing it before we were acquainted - as I was at far too late an age - with Tintin.