To those who still buy CDs...


...you could support our stalled, languishing and penniless (though still ever creative) musicians at this time. Remember that all the from-home concerts they do are for the love of it, to feel that they're still performing and reaching out even if that 'magic triangle' of live music as defined by Britten - composer, performer(s), audience - has temporarily vanished. 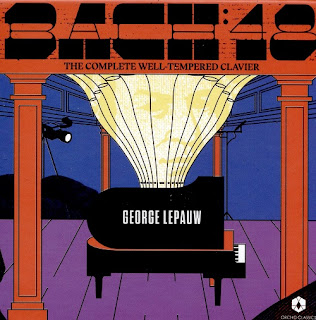 This ties in well enough with some of the discs I've been listening to over the past weeks. Perhaps it shouldn't come as a surprise that Bach, being both of the essence and worth hearing over long sequences, has been top of the list, and the absolute highlight I wrote about yesterday on The Arts Desk - 90 glorious minutes of Jeremy Denk taking us through the workings of five Preludes and Fugures from The Well-Tempered Clavier. I didn't know about it when I worked my way through the five CDs of the two books just released on the Orchid label by a pianist I hadn't heard of before, George Lepauw.

These are very personal readings, full of rubato and the kind of tense-and-release which won't please those who like their Bach crisp and even. But somehow with this composer you always know when his interpreters are in a deeper zone. I've said it before, but much as I like Vikingur Ólafsson's intelligent programming on his Bach disc, I wouldn't have given it the kind of awards it garnered. At the time I went straight across to hear young Martin James Bartlett and grand maître (no need to call her maitresse) Idil Biret, and there was the thing-in-itself, the very essence, reached as in the best of transcendental meditations. Denk is there, too; I've written more than I should about his inspiring masterclass, so just go over to The Arts Desk, read if you like and if you don't, just click on the link. As I also wrote there, I suspect that were Denk to record all 48, that would probably push aside all the other Well-Tempered Claviers I have, just as his Goldberg Variations did - until Beatrice Rana came along. There are, in any case, infinite varieties of interpretation in this endlessly re-discoverable music; it just depends on which appeals most to your temperament. And Lepauw was also filmed in Weimar's Jakobskirche; I've yet to see the online documentary/performances. 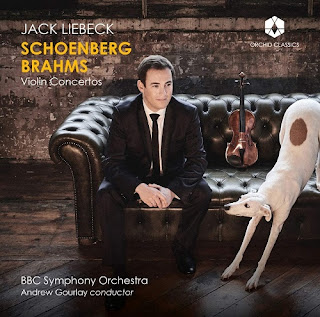 Orchid, the CD label which took on this project, seems to hit the nail on the head every time. I have friendly email exchanges with its main man, the excellent violinist Matthew Trusler, and so I'm maybe partisan; but every CD that comes along strikes a chord, makes me sit up and listen even if I'm dipping in casually. When Matthew told me that fellow violinist Jack Liebeck's Brahms was exceptional, I listened - and I agree (I haven't plucked up the courage to listen to the companion Schoenberg Concerto yet; I need time and a score). Such perfect intonation, just the right degree of fantasy. And the oboe playing of Alison Teale in the slow movement - the players of the BBC Symphony Orchestra under Andrew Gourlay are all credited in the booklet - is superlative, and it all sounds so good (no surprise when it turns out the producer was Andrew Keener). The cover photo, by the way, and the ones of JL in the booklet, are by my good friend Kaupo Kikkas, inspired as usual, in this case to include Jack's adorable dog. 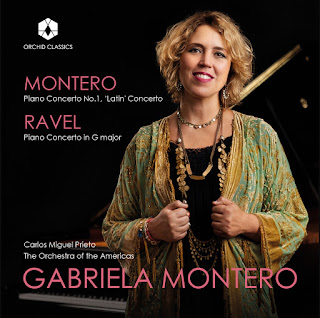 It was a coup for Orchid to 'get' Gabriela Montero, possibly because it agreed to her own Piano Concerto No. 1, 'Latin', appearing on the disc alongside Ravel's G major - and whilst the latter is impeccably detailed and alive, rich and full, the Montero work is also beguiling, immediately communicative. I like the programming of Yu Kosuge, too; she's halfway through her 'Four Elements' series with 'Fire', taking us from hearthside meditations by Tchaikovsky and Reger to the more dangerous flames of Liszt, Scriabin, Falla and Stravinsky; there were some real rarities on the 'Water' disc too. 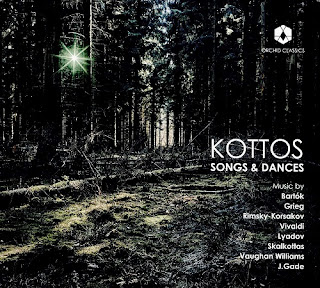 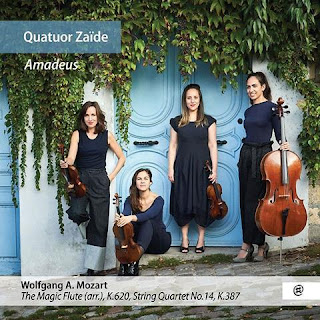 But enough spotlight on Orchid. Another CD of a transcription that works superbly was given to me at the end of Quatuor Zaïde's wonderful concert with Fiachra Garvey in the small but perfectly-formed first Vauxhall Festival. They featured a 1792 quartet arrangement of the Queen of the Night's second aria in their Mozart first half, and it turns out it's one of 19 movements selected from The Magic Flute, featured on a disc which also has the nuance-perfect interpretation of the bold G major Quartet, K387 I heard in the concert. If this clip doesn't sell the Flute idea to you, nothing will.


The Zaïdes make the G major masterpiece sound incredibly modern, but what they do is nearly all in the score. I look forward to their next CD, which will follow a similar format with a Beethoven quartet (one of the first, Op. 18 set, I think) followed by the stunningly effective string quintet arrangement of the 'Kreutzer' Sonata I heard played by Sheku Kanneh-Mason and friends at the Highgate Festival. Sheku, by the way, is still staying loyal to the groups he played with before he became really famous: he'll be trying out the Dvořák Cello Concerto for the first time in October with the Fantasia Orchestra conducted by Tom Fetherstonhaugh, with whom I heard him play the Haydn C major. 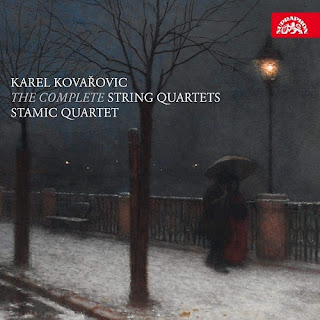 Sticking with quartets - of which I've played a lot in lockdown, trying to stick to quieter music out of consideration for my neighbours (though there's no placating the passive-aggressive lady downstairs, who goes to the council and the estate office before she speaks to me) - there's a mellow beauty from the Stamic Quartet, showing what a superb craftsman and original melodist was Karel Kovařovic in his three works for that format (he's usually only known as the conductor who initially failed to recognise Janáček's genius). Easy listening, in a sense, but none the worse for that. My thanks to an incredibly generous Czech friend, who deserves a medal for his services to Czech music as he sends me and The Arts Desk's Saturday classical CDs columnist all the latest (I've also been spellbound by a disc of Janáček piano works from Jan Bartoš, and Martinů's "Incantation" Concerto from Ivo Kahánek with the Bamberg Symphony Orchestra under peerless Jakub Hrůša ).

Symphonic music has been in abeyance, for neighbourly reasons given above, other than the discs I've been reviewing for the BBC Music Magazine and a chance to correct the unpleasant flavour left by Maxim Emelyanychev's over-speedy-to-breathlessness performances of Beethoven Five and Seven with the Scottish Chamber Orchestra (my last excursion, to Edinburgh in early March). The players clearly love ME, and their recording together of Schubert's Great C major Symphony helped me to understand why. 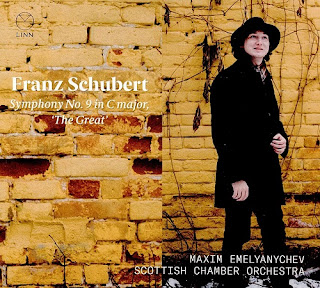 It's full of personality, but (unlike the Beethovens) never too wayward. So I'd better give the team another chance. Ticciati he is not, but he's clearly a force to be reckoned with - though in the hit-and-miss Currentzis league. To watch both in action is almost unbearable. Meanwhile, I hope the rather better all-rounders among young conductors I know will be able to pick up where they left off, along with all other musicians and performers in general. This is a very hard time for them and I suggest you donate if you can to a relevant set-up of your choice; my favoured targets so far have been the City Music Foundation and the National Youth Orchestra. Meanwhile I leave you with an earworm from a disc I've played two and a half times in recent weeks: from Shai Wosner's marvellously programmed 'Impromptu' CD, Gershwin's Impromptu in Two Keys. It's accompanied here by a neat little film which has a special poignancy now that stricken New York is in lockdown. Those streets were made for walking...

David.....a brilliant and very worthwhile entry, And your comment on the Magic Flute piece is spot on.

Once when walking past the opera house in Stockholm I saw an opera advertised in Swedish, with the name W A Mozart attached. I asked my Swedish colleague, which opera? He glanced to his left as we walked. and answered " The Amazing Whistle"

But then it would lose completely its main point, which is the scary and weird high coloratura. Same with Elettra in Idomeneo. Mozart also wrote slightly less ferocious revenge arias for Bartolo and the Count in Figaro. Horses for courses. I love the Swedish title 'Trollflöjten', which doesn't exactly translate as 'The Amazing Whistle'. Swedish being sufficiently close to German, Bergman's masterly film doesn't sound too odd in that language.

My heart breaks at listening to--and watching--the Shai Wosner. A lovely, wistful piece, and, most poignantly for me, the video is shot in our city neighborhood. The Silver Moon Bakery was--and will be one day again--the place we go to get bread and pastries when we have guests for dinner . . . but for the moment past tense. Thanks for the recommendations, too. I look forward to a listen to the Kovarovic quartets. (I do, BTW, still buy CDs--and indeed prefer them to streaming by a long shot--but unfortunately that is all on hiatus, as we are separated from our stereo system until things ease up, which is sadly far, far down the road.)