Deller, VW and the Melodians 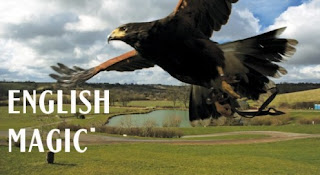 That's acclaimed artist Jeremy, not late countertenor Alfred, and his masterly fusion of music and image in the 'English Magic' film which is currently part of his British Pavilion exhibit at the Venice Biennale*. I'm indebted to old friend and frequent commenter Howard Lane for drawing my attention to it. Howard and his daughter Rowan headed to Venice as part of the amazing Melodians, an English/Trinidadian steel band from south London whose talents Deller engaged for his genius selection of British sounds and sights. Here they are on a wet Abbey Road zebra crossing having recorded the soundtrack in an appropriately famous UK institution. 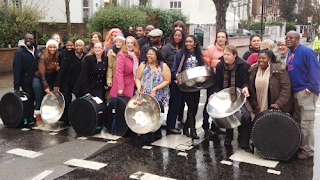 I could hardly believe my ears as the film proper got underway with the mystic chords of the Romanza from Vaughan Williams's Fifth Symphony rippling on steel. That's another one in the eye for the Ukippers who would claim VW and Elgar as their own. It not only sounds exceptionally haunting in that arrangement by the Melodians' conductor Anne Hornby, but it somehow fits with the two other choice transcriptions, of 'Voodoo Ray' by A Guy Called Gerald and 'The Man Who Sold the World' by David Bowie.

There's no need for me to interpret for you the haunting juxtapositions Deller finds between birds of prey and VW, claws of natural and mechanical kinds, the timely exuberant human bounce on an inflatable Stonehenge or the selective images of the Lord Mayor's Show to the Bowie (title not irrelevant - and did you know the army paraded tanks through the City on that day? I didn't). Just watch the 14 minute film here (the Vaughan Williams for the birds begins one minute in). Then watch it again. A little masterpiece, and the EP might be worth buying

Howard commends Jeremy Deller as a Thoroughly Good Bloke who was happy to share the Venice limelight with his steel banders. Here they all are outside the Pavilion. Howard is peering over shoulders at the back; Rowan - how she's grown since I last saw her - is third from the right of the sitters. 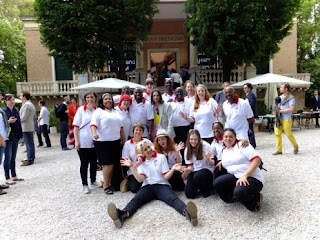 Hearing the Bowie again serendipitously coincided with a delightful blog entry from dear Sophie in Mali, who has been getting hotel staff turned bogolan workshop assistants Baba and Papa dancing to Bowie - and they are very choosy, I know, about what non-Malian imports they will embrace (the DVDs we took of Fawlty Towers had them in stitches about their very own irascible hotelier). This photo of our Sophe wearing her MaliMali designs (of course, never the one to miss an advertising opportunity, for I can't believe she drifts around the hotel in that ensemble) jigging with Baba belongs to her blog, but if I put it up here too, it will make me jolly just to look at it. 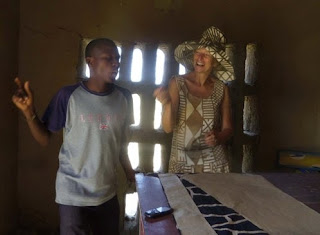 This is irresistible to dance to, too: Lulu's Bowie-approved cover version of 'The Man Who Sold the World'.


A couple more YouTube specials to make you smile. I have a feeling that if Austria had entered 23-year old Martin Piskorski, ex-Vienna Boys Choir member currently training at the European Opera Centre in Liverpool, for the BBC Cardiff Singer of the World Competition, there might have been a tenor in the final. The below, his moment in the sun, was THE goosebumps moment of the diplo-mate-facilitated Europe Day Concert 2013 at St John's Smith Square, with Laurent Pillot conducting the great European Union Youth Orchestra.

To celebrate the Irish presidency, some rarities had been unearthed, including the Overture and an aria from Stanford's Shamus O'Brien. Who knew? The Overture is a gem worthy of Sullivan at his absolute best -  I hope not to demean Stanford by saying so - and I'll probably put it up on another post. And young Piskorski has the money note in the big phrase towards the end of 'My heart is thrall to Kitty's beauty'. The instant 'bravo' at the end comes from my guest Debbie York, and she knows what she's talking/singing about.


I could kick J as much as myself for not finding out more beforehand about last night's concert to inaugurate the Lithuanian presidency, also at St John's. 'Some accordionist', he'd said when I asked who was performing, not knowing more - this is THE accordionist of the moment with his charismatic band, Martynas Levickis, just signed up to Decca. Whether he is more than a good player - ie up to the standards of the phenomenal Mythos Duo whose Petrushka transcription is my CD of the year so far - I can't yet tell, but he certainly has musicianship and charisma. This is such a moody picture of him duetting with the band's handsome violinist yesterday, courtesy of the Lithuanian Embassy. And I missed it! 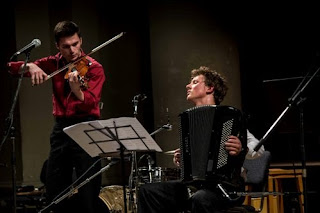 Levickis sprang to fame, unlikely as it may seem, on Lithuania's Got Talent in 2010, competing alongside  the likes of a man who played tunes on his teeth. He baffled the half-witted audience and judges by playing Piazzolla's Libertango, but readily played something more obviously crowd-pleasing, and of course much less interesting, on request. 'This is more like it' gurn the lardier versions of Ant and Dec from the wings. Anyway, he won.

David, the "English Magic" piece is wonderful. The birds of prey are magnificent, of course, enough to bring one to tears. And there is something fascinating and surprisingly heart-wrenching, as well, in watching Stonehenge being erected and then falling - some ancestral rumbling, perhaps. And, Lulu! How differently we see her now, compared to when we first heard "To Sir With Love." Have you heard her sing blues? There's a nice sample here http://www.youtube.com/watch?v=Kp6JJ5u3uyE, along with comments about the British/American blues connection. -- Elizabeth

Isn't it just, Elizabeth? So many resonances and connections in less than a quarter of an hour. And so much classier, or rather lighter of touch,in its suggestion of multiculti England than those inevitably cumbersome Olympic extravaganzas.

Glad you approve of Lulu (Sue I think draws the line there). She, Cilla and the Beatles were mother's milk to me, playpen rockalong stuff. I think 'Call Me' was the single we had, though 'Shout' signed her in, as it were. 50 years' singing and still looking/sounding good - that's our Glesca gal. I shall look at the blues clip - that I didn't know about her.

Sophie tried to explain by message but connections were broken off so I take this from an e-mail:

'Actually I am NOT wearing the hat to be photogenic, I just forgot to take it off. If you can bear to visit www.facebook.com/malimalistudio you will see me painting in the midday sun and a hat is necessary!'

David, what a delight of a post! I agree with you 100% and then some about the photograph from Sophie's blog, which makes me smile, too, every time I see it, so thank you for doubling the pleasure by posting it here as well. As for the Lulu-Bowie, I'm afraid this might the kind of thing that led a friend of mine to remark, about my taste in music, "You just don't like music." But, since my taste in popular music is not exactly stellar, I’m certainly no judge in these matters, to say the least. That confession duly made, I love the exuberance and fully endorse it.

So, onward to praise the glorious VW on steel drums accompanying the magnificent video of birds of prey. I recently learned that Grisey used steel drums in the Quatre Chants, to stunning effect (amazing how hard it was to get confirmation of the instrumentation online). Steel drums, blazing accordians, it’s wonderful how many different instruments are coming to be recognized for their full capabilities (though apparently not by the no-talent “got talent” judges, oy!). As for Piskorski, many thanks for the introduction, clearly he is someone to whom attention must be paid.

Yes, you certainly missed it! J was right - he's some accordionist, all curls and smile and the simply amazing Libertango. Brilliant.

The English Magic is so very magical, the opening haunting trippy (VW) sequence astoundingly beautiful (I love love love birds) and then it snows and then the white falcon lifts off in one of the most extraordinary captures and then everything I've ever wanted to happen to Range Rovers happens (except that the drivers weren't inside), and they beat on and on and on. Well dome team UK (don't mention the rugby).

Money note indeed! If that was Debbie, she's sounding rather butch, no fan girl squeal that, using much chest voice for that outburst, such was the emotion no doubt.

And that photo of Sophie with the gorgeous back lighting is all but delirious with the joy of rhythm and life. I must tell her. Oh - just visited, you've said it all, but there's no such thing as too often.

The sun is peeping through the gums as it comes up over the gully. Can you believe it's cold down here, but so still and peaceful. The lyrebrids have trashed the gardens, with claws like those falcons, but the birdsong is divine, such price beauty, They are my sacred cows.

Technology is failing all round me: laptop is in a lab somewhere for the next few days and the reply to Sue has disappeared. The gist of which was, how wonderful when a virtuoso turns up to promote a rare instrument - be it Larry Adler, mandolinist Avi Avital or now our sweet Lithuanian. New rep is composed, one happily listens to anything in the performer's transformative touch.

That was oor Deb, to be sure, wanderer. Nice to have commendations for all the young stars featured. Glad to read your reservations about the Visconti Leopard chez Scheid. I remember the lyrebird shots. More this year, please.