Monday: occasionally sublime silent filmmaking up to and including this scene 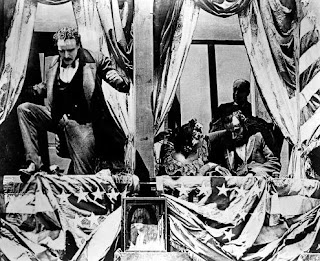 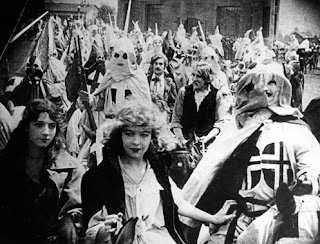 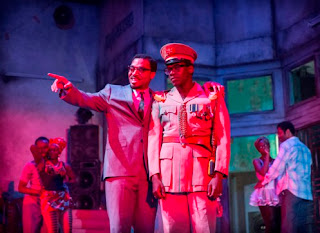 Chiwetel Ejiofor (pictured left with Daniel Kaluuya as Joseph Mobuto) gives a towering performance as Patrice Lumumba in Joe Wright's hyper-imaginative production of Aimé Césaire's A Season in the Congo at the Young Vic. 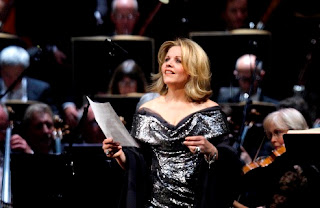 Renée Fleming, by no means the only great thing about the Royal Opera's concert performance of Strauss's Capriccio. 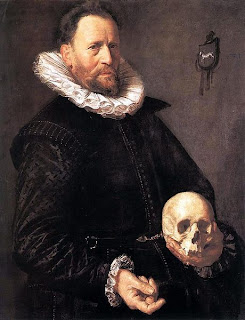 Franz Hals's portrait of an unknown man, seen in a quick visit to the National Gallery to look at the paintings on loan from Birmingham University's Barber Institute of Fine Arts in Room One. 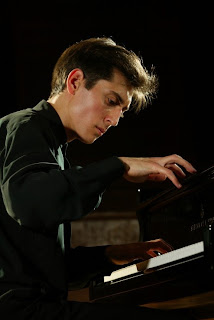 Yevgeny Sudbin surpasses himself in Liszt and Scriabin at the Wigmore Hall. 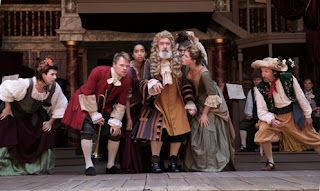 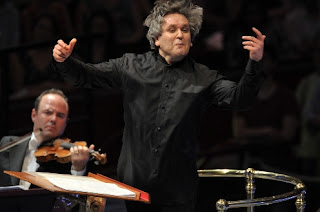 Sunday: a much-needed day off, including quality time with J's adorable godson Frankie, his brother Charlie and dad Nick Hills from Amsterdam lounging around the Victoria and Albert Museum's courtyard pool (the perfect place if you have to be in central London on a baking day). J went to the second performance of Capriccio and, I'm relieved to say, loved every minute of it.

Thanks, anyway, to The Arts Desk for making most of my visits possible. And for that same institution I'm soon to plunge into the wretched Albertine colosseum again for the first two instalments of Wagner's Ring as conducted by Barenboim. Siegfried and Götterdämmerung will be sacrificed to The Turn of the Screw and A Midsummer Night's Dream up in north Norfolk at the weekend*, by which time Donner will have swung into action and our glorious heatwave will have crumbled into rainy days, I'm told.

Consequently I thought I'd throw in one of Frederic Church's admirable sketches, much better than his (over) finished paintings and previously in the NG's Room One before the Barber selection took over, of cumulo-nimbus clouds over his home, Olana, for Sue. As she knows, I and New York friend John Morris experienced an almighty storm up there, from which we sheltered in the porch, watching the fork lightning all over the Hudson Valley. 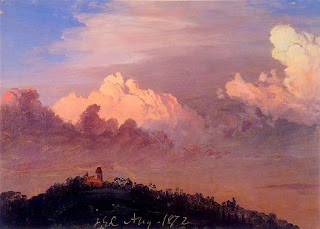 As for the end of our summer idyll here, never mind; we've had our vision and everyone except harrassed mothers seems to be the sunnier of temper for it.

*23/7 Now that I'm reeling from the diamond-cut magnificence of the Rheingold, I'm sorrier than I thought I would be about missing the last two instalments. But that doesn't stop me anticipating the Brittenfest with the keenest pleasure.

David: Splendid is at least one possible word for all of this, though it's not enough. Your report on Sudbin is beyond lyrical, as here: "Strapping on wings like Icarus, Sudbin remained unburnt by the sun in Debussy’s L’Isle joyeuse and Scriabin’s Fifth Piano Sonata." This reminds me of your brilliant literary reference to Flaubert's Parrot to start off the liner notes for the Tchaikovsky Brilliant set—that remarkable ability to make such a reference, not to mention the turn of phrase. As for the Olana storm, yes, I remember your report of that. How beautiful that must have been! We've just had a rainstorm here, though no lightning. The cool air coming behind the storm is such a gift. We have the windows flung wide open once again and can hear the wood thrush's beautiful flutey call. We look forward to sharing this with you and J one day before too long.

(Must say this: I went back to Ashbery's Self-Portrait in a Convex Mirror, and nearly regretted recommending it. Not that I don't think it's worthy, but I went back to it and see that, while I love the beginning and the ending, in the middle, I am well and truly lost in a dark wood.) Meanwhile, Poulenc! Such a time he lived in, so many avenues one could pursue. I'm listening now to the Organ Concerto, before that the Harpsichord Concerto. I wonder what you think of them? Such an interesting man, living in such interesting times.

What a world, indeed! While I've listened only twice, and not with full attention, I think I share your view on the Organ Symphony--many interesting passages, but I'm not sure it adds up to a coherent whole. I saved the Gloria (which is a piece with which I'm familiar) until I was at that point in the letters. Today, I arrived at that point. Ah, glorious Gloria. And this is what I thought: how can anyone want to spend a drop of energy on what's her name's hair (or the royal event, for that matter), when it's possible to read the Poulenc letters and listen to the Gloria? It's not that I'm well-versed, I'm not at all. I just don't get it. One is food, the other trash. I will not be altogether absent here, that is for sure, for "[t]here is light in there, and mystery and food." (From John Ashbery,Just Walking Around). I look forward to your Ring reports.

David you must take a lot of notes going to all these concerts, a whirlwind of events. I suppose when you are young you have a good memory for details, etc..
Still reading your book on Prokofiev, we let you know how I make out. I may have a question or two on the fellow.

Well, Sue, I DO think Beyonce deserves to be named - the video of the 'put a ring on it' number is a classic IMO. But, no, we don't want to know about the hair and we DO need the uplift of Poulenc's Gloria, whether religious or not. Always.

Laurent - no, this may sound like bragging, but I never take notes during concerts or operas. At the theatre, sometimes, if there's a line that strikes me and the playtext isn't available. And of course at home with CDs. But I reckon that significant details should stick in the mind, and if you're noting down one thing you may miss the next.

Good luck with the Prokofiev and fire away when ready!

Annoying. The home censor, inordinately cautious, wanted a line removed from what now reads as 'comment deleted'. So here it nearly all is again (so that you can understand Sue's response).

(23 July) Ah, a wood thrush in the Hudson Valley - how evocative! Despite rumbling thunder most of the night, the air has yet to clear here.

I must say I find the Organ Concerto a bit of a schizoid piece in a baffling rather than a good way. Not right in a cathedral, perhaps. Poulenc adored the Pretre recording, as you'll read, so I must go and seek that out. The Gloria's the thing - I don't know a more joyful/spiritual 20th century choral work. Belshazzar's Feast and Bernstein's Chichester Psalms show only facets.

Finally, I want to be completely current, and there's no way I want to put this in the main text. [redacted - the nearest I was going to get to commenting on the royal baby] And the BBC's most read No. 1 is NOT the story you might expect but 'Beyonce's hair gets caught in fan'. What a world.

Much more on my mind is the fact that the Proms Rheingold was the greatest diamond in terms of casting and playing last night, and that I'm now in Wagner mood, inordinately excited about Valkyrie tonight.

(24 July - I was right to be. Much hotter and more exhausting, though, for all concerned)

David: This is fascinating. Your comment on Beyonce reminds me so much of a valued friend who loves King Crimson and offers sensationally cogent reasons why. Only for you would I try a listen to Beyonce, for she means nothing to me. “Put a ring on it,” I must confess, left me unmoved, but the Edu-Mate reminds me that there is so much more to music than the music itself. I wondered if, in part, it might not be generational, so I went back to Sophie’s choice (or one of them), The Doors. While I can’t say I would want to come back to it, I had real affection for Light My Fire (though I’ll confess, I didn’t make it all the way through). I then went searching to see what on the “pop” side had resonance for me. The closest was the Grateful Dead’s Casey Jones (click here). I could listen to it all the way through with at least a small amount of pleasure. Yet I think it had little to do with the music and much to do with its connection to a time and place in life. (After all, I was present live for a Grateful Dead concert at each of Filmore East and Filmore West, and in the case of West, I had a DREADFUL case of poison ivy, contracted from going down a cliff to a beautiful beach, then climbing up, in a swim suit, not knowing the plant that surrounded me was poison ivy. Though I was itching like crazy, somehow the Grateful Dead took it all away. Almost, anyway.)

Interesting to read your TAD piece on Das Rheingold and wanderer's account about the La Scala Ring side-by-side, and thinking also of LePage's production during which I often thought that less might have been more. This in your TAD review struck me particularly: "without the box of tricks directors have to throw at this most schematic of the Ring operas, the clarity and meaning billowed and breathed." Reminds me, too, of the tremendous effectiveness of the minimal staging/lighting design for Adams's Gospel.

Indeed, Sue. As I wrote chez wanderer, I wouldn't usually advocate a plain concert performance over what should be the Gesamtkunstwerk, and the Royal Opera Capriccio was a case in point of a director needed to harmonise singers using scores and others not, plus small details of staging with minimal props which would have made some elements more intelligible.

But the work on this Proms Ring so far DOES seem to me to have been harmonious, the one-to-ones so detailed (well, Stemme's and Terfel's, at any rate). One thing which might not have been allocated to the director: dress choices. Why a pink-clad First Rhinemaiden and an Erda in red?