The statue in the orchestra 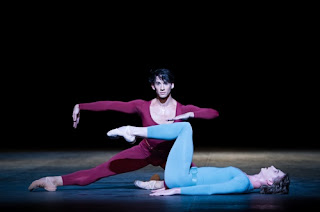 Writing a programme article on Strauss's operatic canon for the Royal Opera's recent Capriccio, I was struck - and took the same title as a result - by the composer's reminscences about his operas from the perspective of 1942. He quotes Berlioz on Fidelio: 'Grétry has accused Mozart of putting the pedestal on the stage and the statue in the orchestra'. A bizarre charge, of course, as Berlioz recognised: just because the greatest operatic composer of all time gave his orchestra a dramatic commentary equal to the singers' music, not more important, he fell under suspicion.

There's a rather different application of the conceit in the case of my visit to the English National Ballet's triple-bill 'Tribute to Rudolf Nureyev' on Thursday with my Arts Desk colleague Ismene, who reviewed it with her usual knowledgeable stylishness. I should quickly point out that, despite this initial plaint, this was an evening of pure pleasure. Yet the middle of the three ballets did provide a case of the statue in the orchestra being so riveting that I hardly looked up at what could only be garlanding. 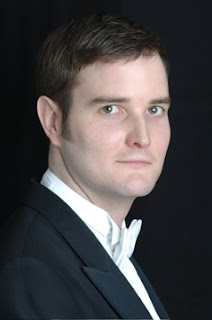 This was Maurice Béjart's brave - for 1971, but still not brave enough by our standards - attempt to give two men a Pas de deux in his choreography to Mahler's Lieder eines fahrenden Gesellen, called Song [singular] of a Wayfarer. Maybe it's because I'm a 'first the music, then the dance' kinda guy that I couldn't take my eyes off young baritone Nicholas Lester (pictured above) in the pit, effortlessly projecting Mahler's intense meanings as he covered the extraordinary vocal and emotional gamut of these four songs. That's a real quality voice, too, something of a rarity. I sometimes find the company's principal conductor, Gavin Sutherland, a little stodgy, but the orchestra is a luxury band and both were on good form in the partnership. 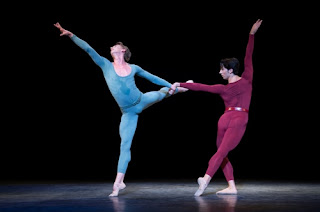 What seemed to be going on above wasn't easily readable: two young men, connected physically but emotionally distant, reacting to the moods of the cycle but never going anywhere as the music's trajectory so obviously does (this is a beef I have with ballet, that it can't develop). Some surprising gestures, a fluid movement of the arm at a trill, the most striking complement to the funeral march of 'Die zwei blauen Augen'; and it was strongly danced by tall young ENB treasure Vadim Muntagirov, partnering a perhaps deliberately impassive Esteban Berlanga. But for me it was just ornamental. Ismene says I have to see what Kenneth MacMillan does in Song of the Earth, so at the first possible opportunity I shall.

In a way, though, I'm putting the cart before the horse, and the statue only briefly in the pit, in accounting for a box of delights which now strikes me as all the more welcome since what followed was total immersion in great, but thorny, Britten, up in Norfolk. Petrushka - what new can one say about the total co-ordination between Stravinsky's score, Fokine's choreography and Benois's designs, looking fresh and lavish in the sets and costumes ENB has borrowed from the Birmingham Royal Ballet? 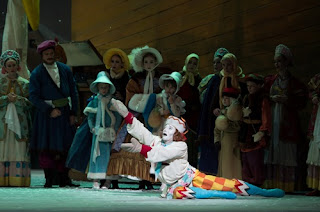 Every musical gesture finds its vivid counterpart in the dance, from Petrushka's hammering on the walls of his prison booth and the Moor's coconut games - the dodginess in the role these days slightly undercut by having a black dancer, Shevelle Dynott, playing up the caricature -  to the footstamping of the coachmen and the hanky-waving wetnurses.

The sets can still surprise, especially when the forecloth of black demons flying over Petersburg falls during the scene-linking drumroll and leads to the stark interior chez Petrushka. Fabian Reimair was poised fabulously between the doll and the human (above in Petrushka's death scene), but no more so than Dynott and Nancy Osbaldeston as an absolutely deadpan Ballerina (both pictured below). 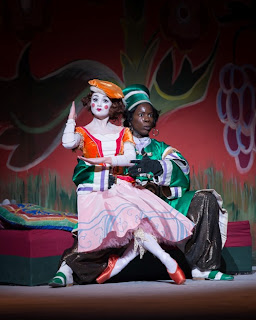 How do they do that opening scene when they seem to hang from pegs jigging about to the Danse Russe? Above all this was a real ensemble show, every detail beautifully illuminated in dance, design and sound. What a great masterpiece it is, still absolutely fresh. 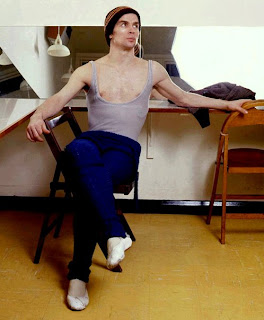 Nureyev's exuberant elaboration of Petipa in Raymonda Act III, on the other hand, keeps the high St Petersburg classical style very much alive. I'm fascinated by so much of his often overstuffed but oh so vital choreography, and I was surprised to learn - even though I read Julie Kavanagh's wonderful biography when it came out, and must have forgotten - how much work he did with the London Festival Ballet, as it then was, around the same time in the mid 1970s that the above photo was taken.

The Raymonda divertissement is done to the highest standards here, with a dazzling take on the old-fashioned by designer Barry Kay radiantly lit by John B Read. I was delighted to hear some of Glazunov's fondant score live for once, and the act begins dazzlingly with a Straussian apotheosis. But apart from two numbers it isn't musically the best stuff in the ballet (postscript: been listening again today to Anissimov's excellent performance of the complete ballet, and the big Pas de deux - plural - in the first two acts are much more remarkable. What a rich, if sometimes sticky, score it is, the fourth Tchaikovsky ballet fallen into decadence). The exceptions are the Grand Pas Hongrois for the corps in glittering white and Raymonda's variation, written for piano to imitate, I assume, the cimbalom (the Hungarian links are tenuous in the plot but give the composer plenty of opportunity for specific colour). 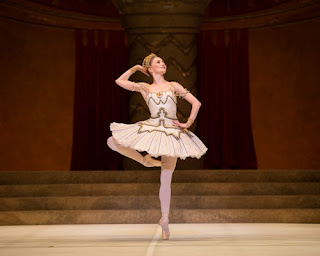 This last was one of the loveliest bits of ballet I've ever seen, Daria Klimentová bewitching and slightly self-mocking en pointe. What a stylish dancer she is, so much more characterful than Rojo in the company's Sleeping Beauty (though Ismene assures me there are things in Aurora's part Klimentová could never manage and that technically Rojo is in a class of her own). Klimentová's partnership with young Muntagirov has become one of the surprise success stories of the ballet world, and their Grand Pas (Pas Classique Hongrois in the original) rightly set the house alight. 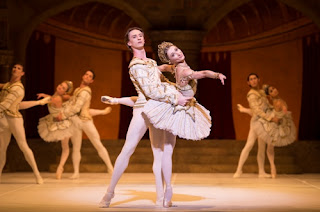 But then so did much else in this highest quality evening. I can hardly believe the whole triple bill was up for a mere few days, but then that's the evanescent ballet world for you. One thing's for sure: ENB, especially with newly defected dancers, can certainly give the Royal Ballet a run for its money.

All dance images by Arnaud Stephenson, courtesy of English National Ballet
Posted by David at 14:42

In ballet as in so much else ( but maybe more so in ballet) the adequate and the magnificent differ in one sense by only a little, but it is a little which makes all the difference. When attempting to advise the Russians in the nineties I was often taken ( well I suppose they thought that is what a foreigner would like to see, and I was trying to chat them up) to Swan Lake at the Bolshoi ( the Stalin version ) and on one occasion my hosts said with enthusiasm that the performance that night would be by " the second team" which I thought meant not so good. In fact it WAS the second team, only just below the first, and although not really a ballet man I was captivated. The corps de ballet especially - they traversed the stage like swans on a lake. Wonderful

When Nureyev arrived in England and for the first time arranged with Fonteyn to dance with her, he said " So you are the great dancer. Show me" She did

On one occasion I was dining ( and in the chair) at a club which had a dress code which was not exactly specified. In came a party including two young men in full motorbike leathers. Well I thought, that really goes beyond any possible code, so I rose and began to walk towards the host of the party. Then I saw than one of the young men was Rudolf. I sat down again

That same Stalin-era Swan Lake is currently playing over at the Royal Opera House. Ismene reviewed it for The Arts Desk and expressed amazement that they still put up with it. Tradition and corruption still entrenched: three cheers for their artistic courage in the wake of the horrible acid attack on Filin, and the unfathomable responses to it from Muscovites. A disgusting and dangerous place to be at the moment, Moscow.

Rudolf in leathers! I think I might have passed out with excitement. I did see him once, in his choreography of Le Bourgeois Gentilhomme c.1986. Can't remember much about it, alas.

Your blog is always a treasure trove of pictures and words. I wish I'd had time to get to the Petrushka espcially, not least to see the Benois sets again. These recreations - is it unkind to call them "museum theatre"? - fascinate me. While I admire and am often stimulated by many modern productions (espcially opera), I do still love these original visions with the marks of an individual artist displayed so clearly on the imagery.

During the dinner mentioned above, Rudolf and his companion also in leathers embraced rather noticeably,and often. All over the dining room one could see upper middle class conversations going on ("And how is Elizabeth getting on at Oxford ?" etc) whilst everyone was really trying to look as though they were not doing what they were doing,which was looking at the couple.

Good to hear from you, James: the funny thing about the Petrushka is that it's still so absolutely fresh and not at all museum-y in feel (with the exception of the whole 'Blackamoor' issue which is a bit dodgy these days as the role can only, and even then with still a residue of embarrassment, be taken by a black dancer). Maybe the Fokine Firebird feels a bit quainter than Stravinsky's music. But you must admire his storytelling skill (I long to hear what you do with it). I think these are all available on DVD in one form or another.

David - how could one possibly concentrate on eating and talking with Nureyev in the room? I can't think of many stars who would strike me dumb or impress me that much today.