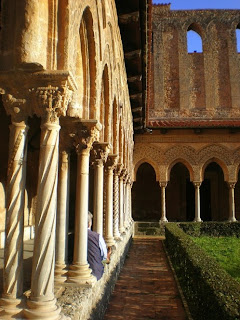 History lesson duly despatched in Part the First, I can go straight to the statistics having noted that more beautiful or intimate cloisters exist down the hill in Palermo, not least the one in the church of La Magione and the lived-in one of Sant'Agostino. But the heaven here is in the detail, as well as the devil and sundry underworldly creatures. There are 228 marble columns, many of them inlaid with glass tesserae, in the vast cloister (47m long on each side) which is all that remains of the original 12th century monastery at Monreale. Multiply that (mostly) by two, as double columns support four-sided capitals, to get the number of different carved scenes on the capitals and you have some sense of the colossal work of craftsmanship that went on here in a very short space of time up to about 1200. 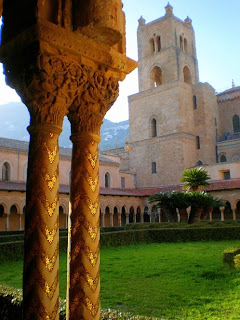 For me, it's the ultimate treasury of the medieval fantasy you also get in our own church and cathedral capitals, corbels and misericords, with a dash of the Arabic legacy William II was careful to nurture in his court. That's most obvious in the diaper work on the pointed arches 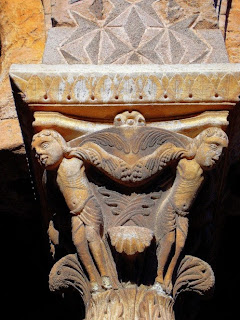 and in the drinking fountain, surrounded by a kind of mini-cloister in itself in the south west corner. 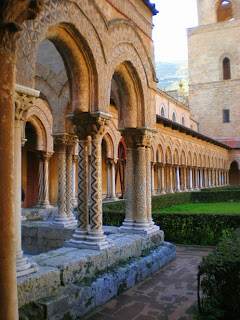 Most of our time was spent on the east side, where the late afternoon March sun still shone the brightest. 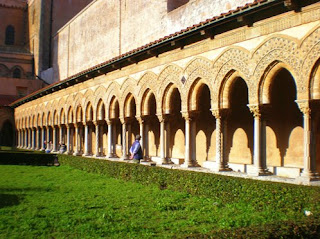 While J put his feet up and took in the rays, I went from pillar to pillar cooing over the sheer variety and range of execution of the subject matter. Literature seems, in my perusal, to be flimsy on chapter and verse: the Monreale book I was planning on buying deals only with the mosaics inside the Duomo. There's a plan of the cloister with some (why not all?) of the details here, which tells me I missed a significant narrative of Norman coronation in the south-eastern corner, but the following should make some amends.

Let's start with the beasties, including harpies with monks' heads, 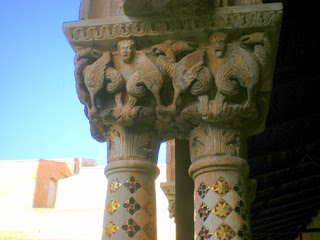 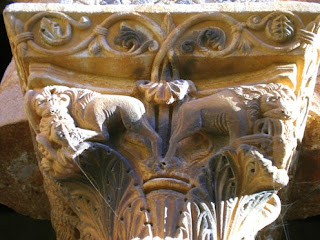 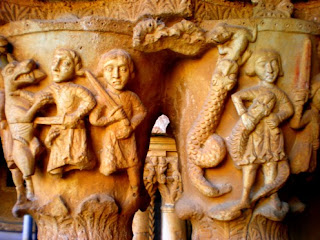 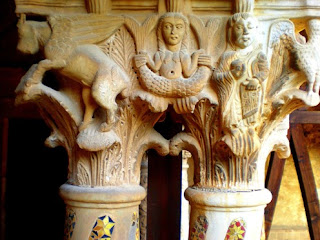 and other thingies from the bestiary I'd hesitate to name. 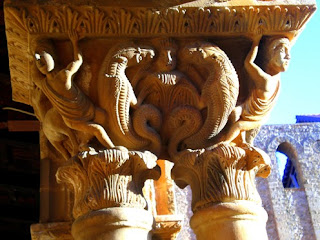 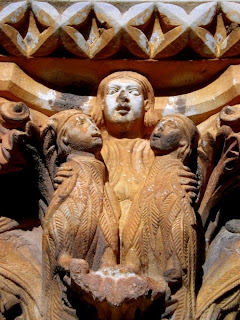 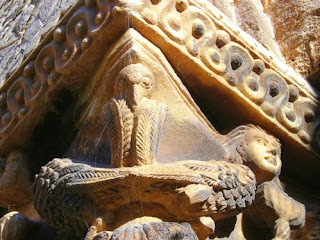 Some of the Biblical scenes look almost Roman in their sculptural quality, like the Massacre of the Innocents. 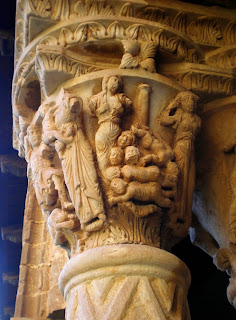 Many are charmingly naive: Adam, Eve and the Serpent, 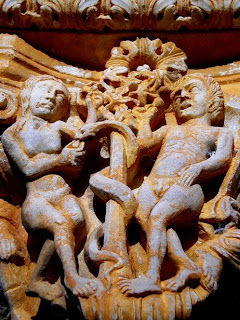 scenes from the life of John the Baptist 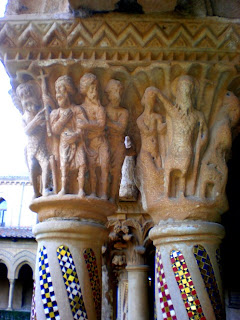 and what I assume to be Old Testament cultivation 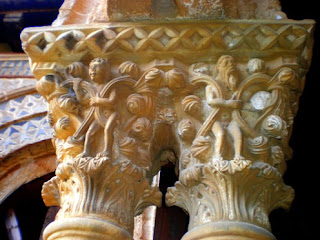 The list-obsessed part of my brain rebels at not having a full guide. If anyone knows where I can find one detailing each and every one of these carvings, please let me know. In the meantime, that leaves me only two more Sicilian retrospectives to go. This could last all year...
Posted by David at 11:14

I've written before that I likely see better through your eyes, and this post is a good example. I suspect I would have been torn between sitting in the afternoon light and taking in the splendid detail, though the latter certainly not with such careful attention as you have done. Your photographs, both the long-view and the close, are a feast for the eyes.

PS: I don't know whether I've thanked you properly for the Shos 5 notes you sent on. The quotation from Shostakovich is striking, thinking of the 4th (for the introduction to which I also have you to thank). Long among my to dos has been to do a listening survey of his symphonies. I suspect I'll never accomplish it, but returning again to the 8 is high on the list, along, now, with the 6 and 10, which you mention, too. The trick is, of course, to eat the elephant a bit at a time (this is probably a woeful paraphrase, so apologies!).

I'm looking forward to next season when the Friends of the Jerusalem Quartet (I know, I know, but that's all past now) have enlisted me to explore the 15 string quartets in tandem with the cycle at the Wigmore. That's a less well known journey for me.

There is no copyright on the phrase, but 'you can eat an elephant in bite sized chunks' would seem to be the maxim here...

Your last comment here demonstrates exactly why it's so hard to stay off the internet from time to time, but also exactly why I need to (not to mention trying, at least, to be a good hostess to all our arriving guests)! I am SO pleased to have your suggestions of Shostakovich symphonies on which to focus. (Some you list I do know a bit, but it's been a long time.) So off I go to start collecting what I have and filling in the gaps. It's a listening project to which I look forward. There has to be world enough and time for this. There has to be. Perhaps a long plane trip . . . to England, to Sicily . . . would help!

As for your String Quartet project! I do have a complete set of the string quartets--though again, it's been a while, and, as with so much else, I don't know them at all well. I would love to return to them. I know you will keep us posted on your own exploration, and I very much look forward to that.

Last not least: J & I will be going to a live performance of Anna Nicole this September (at BAM). I shudder, as I think you know, at the content, but I've never forgotten your own high marks for this and certainly look forward to hearing those "acid waltzes" you noted to me at one point.

Sue, I thought of you and J and how you would have so loved this not-so-mini Britten festival I've just returned from in the Norfolk neck of the woods and coast you know so well. Recitals with top quality performers and works I've never heard in the little methodist chapel at the end of the lane that leads to the church (Jamie Walton in the Cello Sonata this morning, Songs from the Chinese with guitar, and the guitar-solo Nocturne after Dowland on Friday afternoon, inter alia). Strong local involvement and chats with the artists; distinguished visitors including John Copley and Nona Liddell who were involved in the 1960 premiere of A Midsummer Night's Dream.

Best of all, we snuck off to Holt and heard the Serenade alongside Finzi's Dies Natalis and miniatures performed by the Britten Sinfonia and outstanding newcomer Robin Tritschler in a ravishing 'Theatre in the Woods' (amphitheatre surrounded by a ring of high beeches). Can you imagine the magic of the final horn call coming out of the woods at the end? Unforgettable. As were the operas.

Roger, I wish I could name them all. Collected a few more on the misericords of Tewkesbury Abbey the other week.

But I must eventually find time to cover all this.

And of course the operas themselved

Ah, right, you were in Norfolk this weekend. Lovely, lovely. And this as our friends with a house there have just landed in NYC and are on their way to us. I look forward to your reports!

Now, how’s this for serendipity: while you were at Theater in the Woods listening to that last horn sound from the woods(!!), we were this afternoon at Maverick Concerts Music in the Woods, in Woodstock, listening to the Escher String Quartet in a concert called “Britten in Britain,” the windows open to the woods, a gentle rain falling outside (a very nice concert, though, sadly, featuring only one Britten piece, his third String Quartet). Britten and Pears were in Woodstock in 1939, as you likely are aware. I see that, while there, he wrote not only two of the Les Illuminations pieces, but also Young Apollo!

Now, had we been able to go to Saturday’s Maverick concert, we would have heard Les Illuminations live (tenor Paul Appleby—do you know him?). Ah, well. But that’s not all. Get this: we learned that Appleby will be singing the Serenade with the NY Philharmonic this November (21-23) in a program that also includes the Spring Symphony. I don’t know whether I can get into town for that, but I’m going to try. (Speaking of getting to things, DDS must wait awhile—the votes just aren’t in my favor for Shostakovich on the stereo while visitors are here.)

Have you been to Kilpeck, David?

Oh yes, a wonderful out of the way corner of Herefordshire (which is generally out of the way anyway). One thing nags at me about the sweet and strange animals of the corbel table: how, given friable sandstone, could they possibly have lasted? Might they not be an extravagant Edwardian/Victorian makeover a la Rosslyn?

But they're wonderful and the doorway is definitely the real thing.

And the medieval band at Adderbury in north Oxfordshire - 5 minutes from us?

OK, you win with that one. Tell me what makes it special at least (or I can go look up my Pevsner).

I love the variety and invention of medieval capitals. I know the elegance and pure style of the classical orders is lost, but what a feast the medievals have left us!

Will - I guess it's composite gone berserk - but with what individuality and pluralism!

Sue - your later comment only just turned up where I rarely look. So just to say, Woodstock - how perfect. And I am now a zealot for more Britten al fresco. This perfect amphitheatre in the woods of Gresham's (= Britten's and Auden's) School should be used much more, though everyone is craven about the English weather. Midsummer Night's Dream would be an obvious choice, Paul Bunyan my personal favourite. And having heard Britten's Dowland Nocturne over at South Creake, I want to hear that late at night, outdoors, by candlelight if feasible.