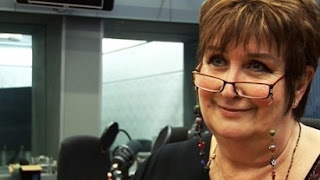 Fair, firm and often very funny, Jenni Murray has been steering BBC Radio 4's ever-fresh Woman's Hour since 1987. Though only in reality a mere Dame, she is indeed the uncrowned queen of broadcasting, so I was more than usually excited to learn that she'd be interviewing me, albeit down the line from Salford to Broadcasting House, along with Susie Self (pictured below outside Cley Church, Easter 2010) about Susie's forthcoming all-women production of Britten's The Turn of the Screw. 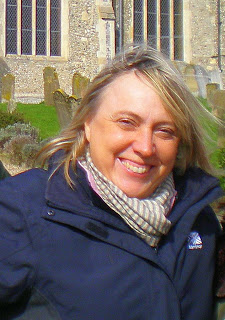 The results were aired live this morning at 10.20 after a very entertaining and light-of-touch take on Robin Thicke's catchy but almost parodically sexist No. 1 hit 'Blurred Lines' - 'unrated' video version with nearly-naked girls wearing only transparent thongs here - and a sweet slot on tandems; you can hear the results on the BBC iPlayer here, though I'm not sure for how long.

The Screw stretch starts at 20m16s before we roll up at about 22m50s, giving me a chance to hear the boy-treble tones of the soprano singing Miles and Susie's rather amazing delivery of Quint's Moorish melismas at the tenor pitch (she'll be conducting, too, so the voice should sound more than usually disembodied from the pit with her back to the audience). The quick-witted Dame followed the right lines of enquiry - following detailed research last week by producer Helen Lee - as intelligently as I knew she would, and our responses don't sound too bad, though the curse of live radio has me giving 'Queen Elizabeth the Second' as the protagonist of Gloriana; Freudian slip, perhaps? And in a sense true, though I'm not sure which young man Madge can be deemed guilty of destroying (Charles?)

What do I think of the idea? Well, never judge a production until you've seen it. There will be substantial new insights but I don't think you can ever quite replicate the queasy intensity of having a boy treble as Miles. On the other hand, the precedents for Susie's Quint are there in Britten's writing the 'role' of the boy in what I think is his deeply sick second canticle, Abraham and Isaac, for Kathleen Ferrier. And Yelena Obraztsova was the (usually counter-tenor) Oberon in the Soviet premiere of A Midsummer Night's Dream. So it depends on the artist(s). 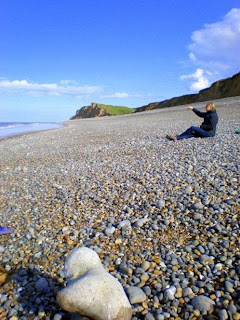 I'm hugely looking forward to a long weekend by (and in) the sea - a distant Susie on the beach near Sheringham that same Easter, above - when we travel to North Norfolk next week for our multitalented friend's Seastar Opera Turn of the Screw at Wells-next-the-Sea and the Yorke Trust opera course production of A Midsummer Night's Dream in glorious St Mary's South Creake. I'll be giving a talk and chairing a discussion in Wells's Granary Theatre on the morning of Saturday 27. Full details here: come and make a beach weekend of it ! 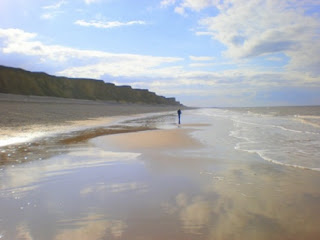 Though the culture-vulturing really ought to stop in this summery heat, I've had to say the least a varied week of it mostly thanks to The Arts Desk: song and dance from Paco Peña's flamenco dance troupe and musicians from Guinea and Senegal last Friday, orchestral ballet music at the Proms on Sunday, an eye-popping (mostly for the wrong reasons) D. W. Griffith silent epic on Monday, the best theatre with an all-black cast I've ever seen including a stunning impersonation of Patrice Lumumba by the phenomenal Chiwetel Ejiofor on Tuesday, a diva giving her all to an audience of 15 on Wednesday morning which can't be written about until the first concert performance of Strauss's Capriccio at the Royal Opera tonight, and a second visit to hear pianist Yevgeny Sudbin at the Wigmore last night.

Embarrassment of riches indeed; but if only the sea were at hand to clear the mind and relax the body. 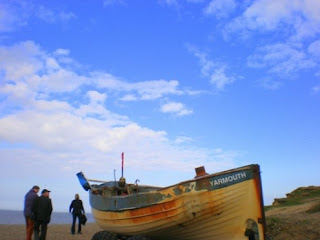 Very Grimes, this parting shot from the same 2010 break, no? If that's Susie striding ahead as the doomed fisherman - next stop for the mezzo/contralto taking on the tenor world, don't you think? - then J and Michael must play Balstrode and Ellen. 'Sail out till you lose sight of the Moot Hall, then sink the boat. Do you hear? Sink her! Good-bye, Peter.'
Posted by David at 14:18

OK, this is insupportable. Do you know you are about to be in the back yard (and I mean that literally), of not only the Edu-Mate's brother, who lives in Sheringham, but also her oldest friend on the planet? If we had traveled this year, we would have BEEN THERE! Damnation! When we came to England last year, where we were was very near, or perhaps exactly where, you will be. (The picture of the tree swallows that is the header for my blog was taken on the pathway to Weybourne beach; the swallows were sitting, waiting to be fed, on a bunker that was part of the coastal defenses.) This once again makes it clear that, even if we do not plan it, we are destined to meet, and soon, I do hope.

So close - me to Stravinsky at Bard, you to that glorious stretch of coast. But I'm sure we don't need to invoke the words of Don Carlo and Elisabetta at the end of Verdi's epic ('we shall meet in a better world'). We shall meet in this one, hopefully next year...

I think that's Weybourne Beach depicted. Wonderful to know that your swallows were nearby. In the winter, the migrating birdlife, the flocks of geese at sunset, are cause for wonder.

Why so often when reading you does that phrase of Lady Bracknell's always spring to mind:
Ah! A life crowded with incident....

As always dear friend thank you for sharing those remarkable incidents with us.

Hail the anniversary husband! I presume you refer to my unforgettable private audience with Renee's Countess Madeleine, for that really was rich. Mind you, so was being interviewed by Dame Jenni - has that doyenne reached your colonial outpost? I imagined she was a local heroine only but with the radio one never knows.

Rich in incident this year, indeed - a Wildean extravaganza. But last year was pure Beckett, and not in a good way, as you know.

From one Irishman to another - with a good one to see to you to boot... damn those Irish are everywhere!

Indeed - my own Saint Oscar (the resemblance has been noted...)

Those photos David, those photos, especially the second last, alone in the pastels, but not alone at all.

Well, heeding the advice to not over edit comments, and having spent quite some time staring at that photo, which is quite dreamy, and a bit mysterious in that the figure is walking clothed within the break, I just felt that I was looking at someone alone, solitary, but nonetheless, perhaps because of the warmth of the pastel shades, which are really beautiful, I didn't ever feel the figure was really alone alone, and certainly not lonely.

To take that any further risks getting soppy, or more so.

Ah, I see. Don't let my question hamper your poetic pen; I treasure your ellipses and your unique way of putting things.

Anyway, glad you liked it. Going back to those pics brought back quite an exceptional beachwandering afternoon that Easter