Above the Arctic Circle: coastline and maelstrom 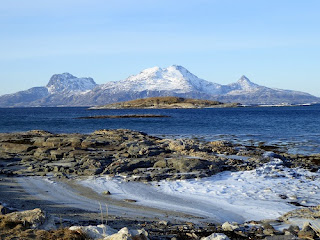 Bodø, pronounced variously according to dialect but most often as 'Buda', not to be confused with the hilly side of Hungary's capital, lies 80 km north of the Arctic Circle on the Norwegian coast (trains from Oslo take 24 hours, with a change at Trondheim). It's an architectural mess of a town - it was bombed in the Second World War - with pockets of fascination, friendly people and a superb concert hall and library on the harbour recently constructed as an impressive act of civic pride. I travelled there to hear young violinist Eldbjørg Hemsing, brimming over with musicality in everything she plays and says, in a violin concerto by underrated turn-of-the-century Norwegian composer Hjalmar Borgström; not a masterpiece, but sincere, worth getting to know and a superb lyric showcase for an artist as top-quality as EH. The interview will appear on The Arts Desk to coincide with Graham Rickson's review at the end of April, when the CD is due to be officially released. 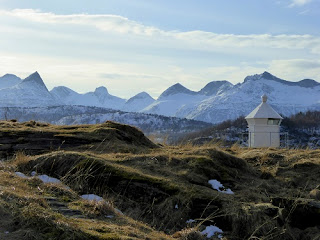 Since Bodø's chief attraction is as a base from which to see some of the most stunning nature anywhere, we visitors from the UK and Germany also had a full day's sightseeing itinerary planned for us, much of it under the aegis of hugely likable local Raymond Limstrand Jakobsen, the Voice of Bodø (says I). Had a hint of things to come in the view from my hotel window 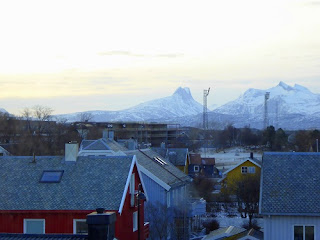 as the sun rose on a day typical, I'm told, for this winter in Bodø - usually, as it's served by the Gulf Stream, it doesn't get that cold, but recent months have been stable weather-wise and well below freezing (with a wind-chill factor we were at around minus six in the day). 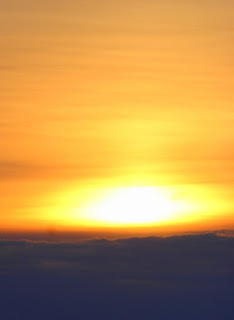 Raymond drove us first out, past ribbon development of the town which goes on for about ten miles, to Saltstraumen to see what's advertised as the world's largest maelstrom. There's a very big humpbacked bridge, quite an impressive feat of engineering, over the narrow channel which connects the outer Saltfjorden to the Skjerstad Fjord. Bald facts from Wiki: 'Saltstraumen has one of the strongest tidal currents in the world. Up to 400,000,000 cubic metres (520,000,000 cu yd) of sea water forces its way through a 3-kilometre (1.9 mi) long and 150-metre (490 ft) wide strait every six hours. Vortices known as whirlpools or maelstroms up to 10 metres (33 ft) in diameter and 5 metres (16 ft) in depth are formed when the current is at its strongest.' Which is at each day's two high tides, so we were there for the morning one. 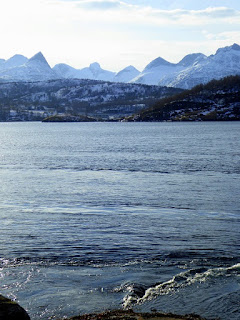 First we walked along the shore line, 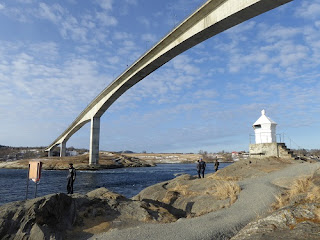 seeing the whirlpools from various distances 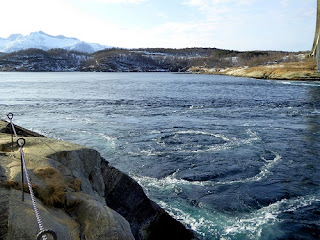 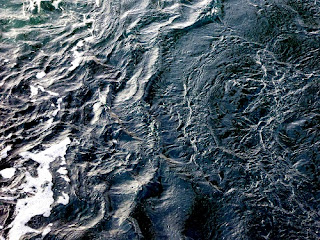 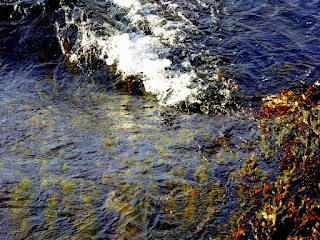 and the birdlife - seagulls co-existing with, what, eider ducks perhaps, on a nearby rock 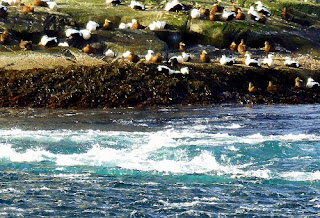 before walking up to the top of the bridge for some dramatic views down. 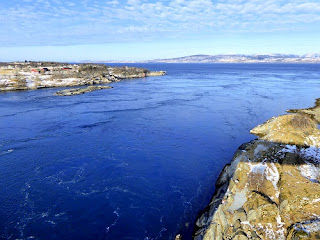 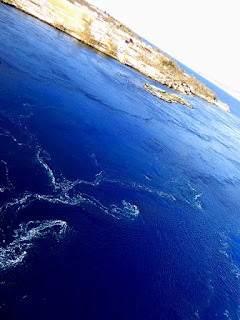 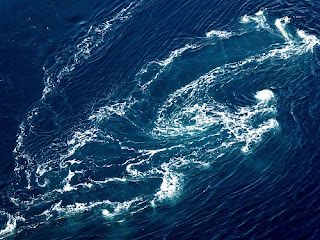 After a warming fish soup back at Bodø harbour, two of us joined a group of intrepid seniors fresh off the Hurtigruten coastal boat for a gentle walk along the coastline north of the town. We needed the spikes provided to attach to our walking boots (that took some time to sort out, and of course I put one of mine on the wrong way). The objectives of the two nice guides were to stop and inform us about three features, starting with a little geology down on the first sandy beach facing the impressive mountainous island of Landegode (the Lofotens are behind it, about 100km away, and could be seen from a higher vantage point later in the day). Interesting fact about the island, which I learnt from Raymond - it has forty inhabitants and four children, but there's still a school there for them. Oh enlightened Norway! 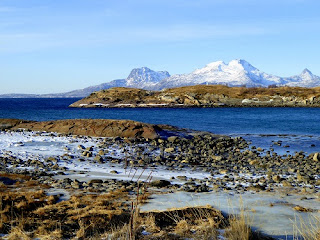 Though short, it was an attractive route between three bays, climbing gently to seaside woods 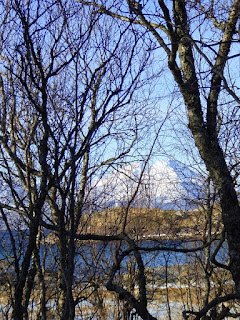 where we had a mini-lecture on Vikings on the supposition that we were standing around burial mounds (not sure if I believe this, sceptic as I am) 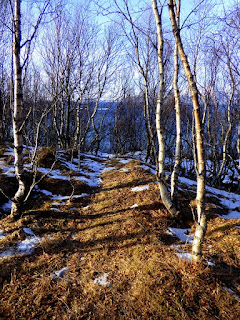 and I was more concentrated on the various lichens. 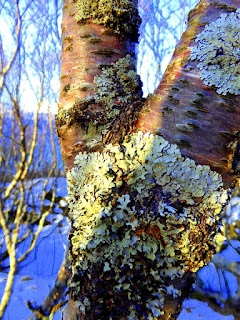 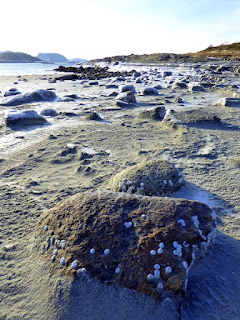 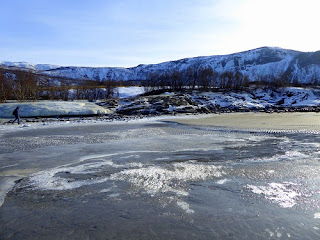 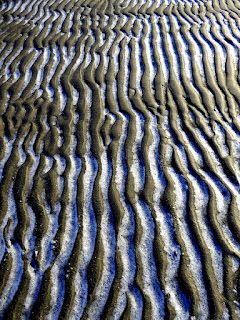 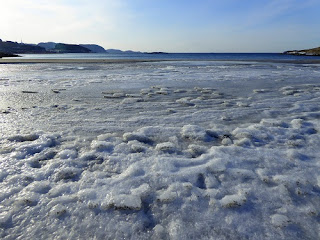 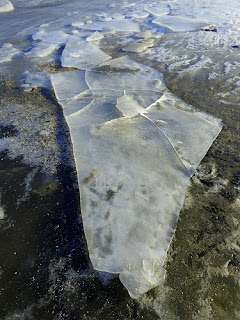 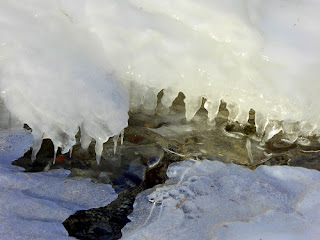 with the sea a temptingly Aegean blue. 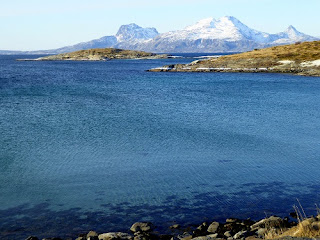 Back in Bodø after a warming tea made from a local herb on the coach, we were kindly driven by Raymond up to the local viewpoint - more impressive for seeing Landegode than looking down on the town, which hardly has any outstanding features 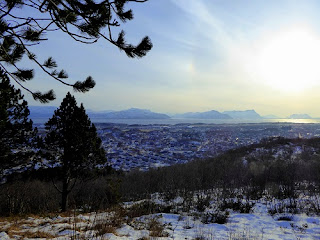 and for better views of the inland mountain range. 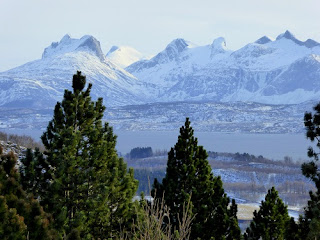 as well as close acquaintance, on the way up and down, with the icicles that have formed from water seeping out of the rocks broken to make the road. 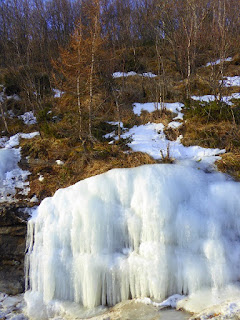 We came back up here to see the Northern Lights that evening after the concert, and they were impressive in a ghostly kind of way, but not photographable. The nearest I was going to get to the true light show was above my hotel room bed, 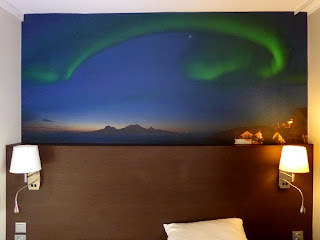 and I'm told that on the night of my departure, they suddenly became truly spectacular and continued that way for a whole week. At least we saw them, and became childishly delighted at the sight, unlike the tourists with whom I shared my Reykjavík bay hotel a couple of Januarys back when I was in Iceland for the Dark Music Days Festival. More on the singularities of Bodø on a future post.
Posted by David at 13:08

There is something unfathomable (to me) about the idea of bombing a place in the Arctic circle. What might have been the reason, if you know? Interesting, also, that Bodo is home to the largest maelstrom in the world. I wonder where the other maelstrom contenders might be located. I don’t envy you being out in that cold, though it’s clear you took in some beautiful countryside as a result. Did you take the train from Oslo, by the way? I will never forget my own trip up to the Artic circle (to Kiruna Sweden). I had no idea, when I decided, on my Eurail Pass, to head up there from France, how long it would take! But it was well worth it.

Big military bases up there, is the answer. Plus of course the borderlands with Russia, which means that bomber jets are still flying around quite a bit. Yes, I wondered about the other contenders. Strictly speaking, it's many mini maelstroms rather than one big one. But I should find out more.

I'm fine with the cold so long as I'm well wrapped up and it's clear and sharp. I've been in colder - minus 14 in Moscow, where you couldn't really be walking outside for more than 20 minutes at a time.

No, is the answer to your question, though I'd love to have taken the train, I flew to Oslo and then onwards - on a big plane, one of many in the day, that was packed. Surprising how many people live up there - settlements run up most of the ocastline. From France to Kiruna reminds me the fact they told me - that if you took a piece of string between Oslo and the northern border and then reversed it, you'd go from Oslo to Rome.

After the defeat of Poland, Hitler decided (1940)that before attacking the Low Countries and France he would seize Norway, to protect the sea route around the Norwegian coast (since that was used to bring iron ore to Germany from Sweden) and provide bases for attacks on Britain. The British effort to prevent this was a bit of a shambles, and we were thrown out. But several parts of the coast were involved in the fighting and Bodo is south of Narvik which was where the iron ore started from and which saw a lot of fighting. The German plan was a well kept secret. Even the general appointed to the command of the troops planned the German attack from a Baedecker guide in his hotel room.

Thank you for that, Sir David. As a piece of history that lives with me, a much-loved student who died at the age of 97, Martin Zam, was an interpreter with the British army for the Russian prisoners of war in Murmansk.

Murmansk is a Russian city and one of the main ports which received convoys from the West during WW2 to supply the Russian armies with much needed materials - trucks etc. They were freezing and terrible and dangerous journeys, but Stalin did not care and was annoyed (to say the least) when the convoys were suspended for a time because of the losses in ships and men.

Thus I would imagine that the friend that you mention in your blog, if at Murmansk, must have been one of the interpreters who assisted when the ships unloaded etc at Murmansk.

As I wrote, he interpreted for the Russian prisoners of war. Many thanks for the extra information. Mine is that Martin was born in 1912 in a small town on the Volga. His father was a pharmacist accused in 1918 of being a capitalist; his staff protested, saying 'he works with us, not over us'. The family left during the Civil War and took a hazardous journey to what was then Constantinople; crossing the lines, Martin's toy soldier was taken by a Bolshevik official. Then they found their way to England, where he lived for the next 80 years.