Devilish music-drama in Zurich and Lucerne


Catching Wagner's Der fliegende Holländer at Zurich Opera with the greatest living interpreter of the title role was serendipity, a bonus preface to my days at the Lucerne Easter Festival, 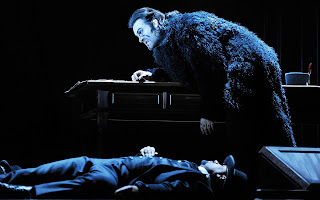 and I wasn't expecting an optional extra in Lucerne, the resident opera company's site-specific experiment with Schumann's Faust-Szenen, to have such an impact. 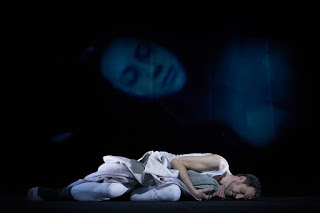 None of us present will ever forget the Zurich concert performance of Dutchman at the Royal Festival Hall. There Anja Kampe (pictured below with Terfel in production photos of the first run - no new ones were taken for this cast, sadly) and Matti Salminen were very much Bryn's equals in holding the stage. This time Steven Humes was, as they used to say, merely faxing it in as Daland; though if Camilla Nylund's more-lyric-than-usual Senta kept something in check in Act 2, it was worth it for the final transfixing commitment before the abrupt end of the tragedy (Zurich's version sticks to the brutal Dresden original, without the Tristanish epilogue in Overture and finale). There was huge intensity and interest in Marco Jentzsch's imposingly psychotic Erik, and promise for that role and other Wagnerian tenor parts from Omer Kobeljak's Steuermann. 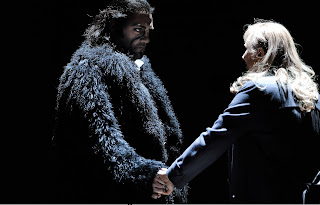 If Bryn has suffered some of the vocal wear and tear inevitable in singing Wagner round the world across the four-plus years since his first Zurich Dutchman, he is still totally compelling. The colour and inflexion are there from the very first phrase ('Die Frist ist um,' spine-tingling), and the hyper-flexible, sensitive conducting of  Markus Poschner enabled him to hover just that little bit longer in mid-phrase. Besides, he only has to stand there - or even, in one effective instance, sit to the left of the stage with his back to chorus and audience - to command the stage with his undeniable charisma. Irrelevant to the performance, perhaps, but a chorus member who told me that he was always solicitous in helping her find her way in the wings without her spectacles signalled that he's still the same team player whom I first encountered in person making tea for everyone in the Dundee recording sessions for Mendelssohn's Elijah. 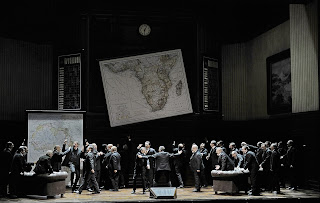 The original photos of 2012 had made me keen to see Zurich Intendant Andreas Homoki's production. The concept is handsome in Wolfgang Gussmann's design: it all takes place in a 19th century merchant's headquarters, but seascapes hang on the walls and in one instance the red ship bobs across turbulent waves as the central painting comes to life. The chorus are very hard-worked and onstage for much longer than usual; they play some of it for comedy, though I wasn't quite convinced by the colonial statement made in the crucial choral Act 3 confrontation between what should be two ships' crews. The expanded map of Africa with settlements marked catches fire - fine, up to a point - and a black, be-fez-zed servant turns into a warrior, rather cheesy. 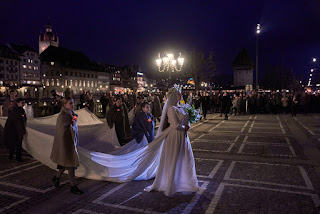 Some overacting though no cheesiness bedevilled the Lucerne Scenes from Faust, but the impression it's left is far bigger than that. At 9pm on my last evening in town, I'd made my way straight from Mariss Jansons' first, unstintingly impressive Bavarian Radio Symphony Orchestra concert in the KKL - more on that in my forthcoming Arts Desk piece - and stood outside the Jesuit Church witnessing hollow-eyed, bleeding-from-the-mouth kids holding up religious placards as the scattered chorus began a Lutheran chorale. Then the doors of the church were flung open and Schumann's Overture began from the excellent orchestra under young conductor Clemens Heil. 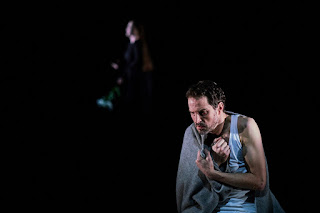 Forbidden to sit and listen, kept at the sides, we then moved quickly to the theatre where Part One and two-thirds of Part Two were played out in near-darkness, the stage in the tiny auditorium built out so that we were very much involved in Faust's fantasies, the orchestra relayed from the church through speakers. Plausibly, the Gretchen scenes were played out as phantasms of the protagonist in (one presumed, though fortunately there were no props or set to underline it) an asylum. A parallel with Schumann's madness, but not a contrived one; director Benedikt von Peter gauged his alternative psychodrama very sensitively. As in a remarkable production I've seen of Ibsen's Peer Gynt - many parallels there with Goethe's Faust - the narrative running through a tormented man's head made the supernatural dimension more, not less, convincing, with spirit voices unseen from upstairs and only a couple of video projections to detract from the Faust-Gretchen-Mephisto dynamic, plus a mesmerising descending light-bulb which gradually became the artificial sun of Faust 'out in the world'. 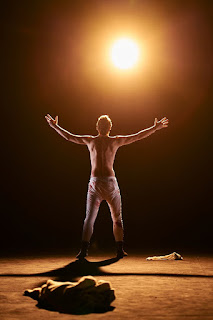 Baritone Sebastian Geyer had a hard task keeping the constant state of anxiety and horror going, but he carried it off, sang well and was plausible when still; and I bought the general idea, Rebecca Krynski Cox's heroine as lily-carrying Madonna wafting across the stage and then spectral distressed, pregnant girl wiping blood over the hallucinating Faust. 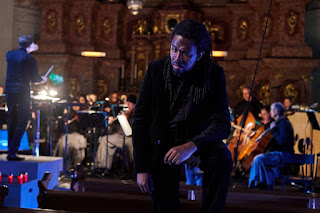 Bass Vuyani Mlinde, familiar from his days with the Royal Opera's Jette Parker Young Artists Programme, was quite a brooding presence. The dynamic between Faust's negative force, the essence of his madness, and the beset inmate reached its climax in the scene of Faust's death outside in the Theaterplatz - Mlinde declaiming from an upstairs window of the theatre across to Geyer on the roof of a wooden construction beside the church. 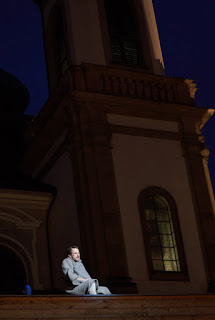 To the sounds of Schumann's magnificent brass chorus - I'm completely in love with this music, which like the Beethoven Mass in C earlier in the evening I've never heard live before - we were escorted back inside the Jesuitenkirche. 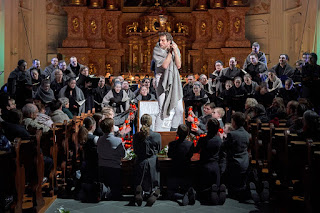 I was anxious - did the clergy know what they were in for when they gave permission (especially as we know the Catholics are less happy about profane events in their ecclesiastical buildings)? The quasi-religious 'Journey to Heaven' continued to be stage-managed by Mephisto with mockery from adult and childrens' choruses. 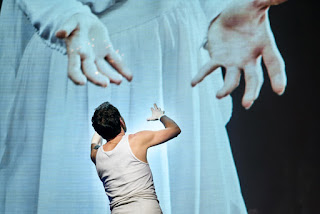 But the giant Madonna-Gretchen on a screen was contradicted by the real human being, perhaps the girl who had lost her man to the asylum. 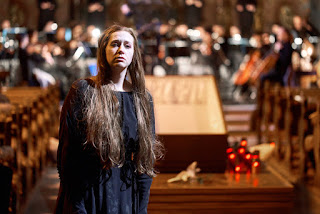 The ending was very moving - a now completely still and blank Faust approached by an elderly person from the street who took off coat and became helper, guiding him to the west door. And so, nearly five hours after the first work in the KKL concert had struck up, a remarkable evening came to an end. Quite an alternative Passion for Easter. I can't wait to hear the music again - must get Britten's recording with Fischer-Dieskau. Even outside the less obviously inspired and fantastical moments - the garden scene, the Ariel music, certain choruses in the final journey, which Schumann treats in quite a different way to Mahler in his Eighth Symphony - the idiom now feels right to me, thanks to John Eliot Gardiner's recent journey of rediscovery. 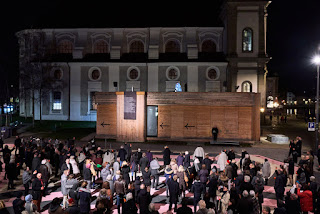 Lucky Lucerners: I hope that anyone with an interest in theatre will rush to this. Needless to say, the surfeit of great events precluded catching the new Holliger opera with Christoph Gerhaher in Zurich the following afternoon; we spent it recuperating in the warm spring sunshine in the Rietberg Park with Lottie and friends. More on the al fresco side of the trip anon; I need to catch up on my Arctic experience first. Meanwhile, a full report on the Lucerne Easter Festival experience, with more succinct words of praise for the Faust-Szenen is now up and running on The Arts Desk.

I have not been lucky enough to hear Terfel live. He was to have been in The Ring I saw, but bowed out. The Schumann sounds to have been quite the event. (I wasn’t even aware he’d written a Faust.) The photographs alone are quite dramatic,

I blush to say it was my first proper acquaintance with Schumann's Faust-Szenen, which of course were not devised to be staged, and came at just the right time when I'm totally in love with his music following the Gardiner experience. So even the stretches of Schumann-as-usual I found attractive. But there's some wonderful originality, too: the Garden Scene, Ariel and the Spirits, Faust's death, the solo cello in the redemption sequence. And comparing that with Mahler 8 is fascinating. Plus it's all to Goethe's text, which distinguishes it from Berlioz's fanciful treatment (which of course damns Faust) and Gounod's schlock (though that has some good music, of course).

Bryn is still the phenonomenon he always was (sprang fully formed as a bass-baritone; there was little his Guildhall teacher, shared with J for a while, could give him). It doesn't matter that the sound is a bit rougher; the charisma and the Lieder-singing gift for pointing the text, the magical pianissimos, are all still there. You should get another chance soon.