Bach and Dante: darkest before the dawn 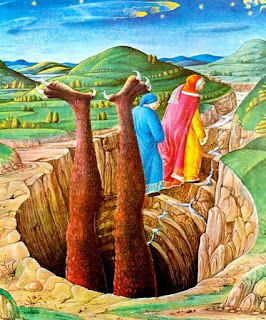 Two Sundays ago I said farewell to meat with the last Bach cantata before Lent (during which time none was performed in Leipzig, though there's the odd one from earlier days) - 'Sehet, wir gehen hinauf', BWV 159, with its searing anticipation of the Passion. The next evening at the Warburg Institute we walked with Dante and Virgil across the frozen lake of Antenora, where traitors to their country or party are stuck, before encountering Satan at the bottom and emerging to start the climb to Purgatory. 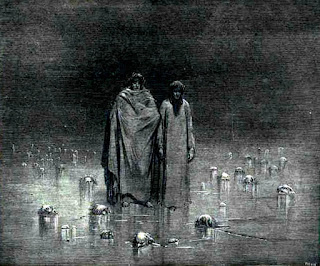 Dr. Scafi and Professor Took had selected lines 1-90 of Canto 33, the awful tale of Count Ugolino's starvation in a tower along with his sons, and 20-69 of Inferno's final Canto, witnessing the 'emperor of this dolorous kingdom' with the supreme traitors in his three mouths, before reading the final description of the return to the 'bright world'. 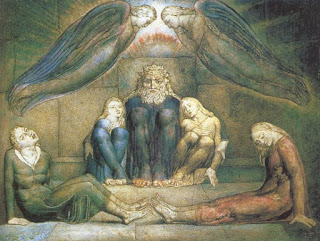 Ugolino's narrative has no light in it, none at all. Dante condemns both the Count, facing the catastrophic consequences of his betrayal for young lives - those of his own offspring - and Pisa, 'shame of the peoples of the lovely land...For if Count Ugolino was reported to have betrayed your fortresses, you should not have put his sons on such a cross'. Ugolino will not look at his boys in their ultimate trial; he is like all souls in hell, cursing everything, angry with themselves, 'not transitive but reflexive' (Took); we understood his ambiguous last line - ''Poscia, più che 'l dolor poté 'l digiuno', 'Then fasting had more power than grief' - to imply that he succumbed to eating the bodies of his sons, though it could mean he simply died. 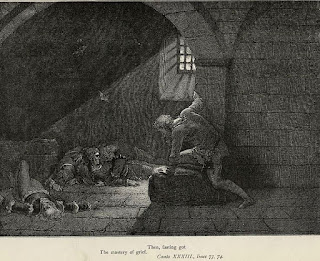 I was fascinated by the idea that the near-bottom of hell is not fire and brimstone, but ice, an atmosphere almost still but for the beating of Satan's terrible wings. Once we have reached the existential limits - 'Io non mori' e non rimasi vivo', 'I did not die, and I did not remain alive' - and witnessed the giant with Brutus, Cassius and Judas in his maws, 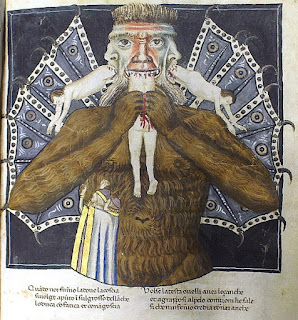 'we have seen everything - nothingness, no more to see...This is the turning place, the ontological fulcrum' (Took). 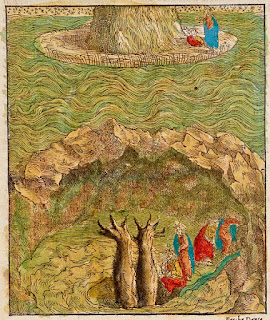 This coming Monday, after a fortnight's break, we are promised an investigation into 'the moral structure of Purgatory'. I have my second volume of the Durling dual-language Divina Commedia in readiness, and I'm just filling in the gaps of the first. 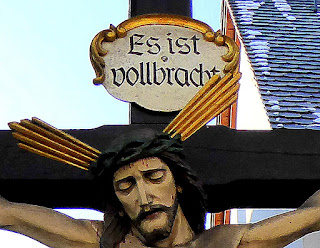 There is awfulness at the heart of Bach's BWV 159, but this setting of Christ on the cross's 'It is accomplished', 'Es ist vollbracht' (seen above on the monument I came across in suburban Bamberg last January), is consoling rather than a heartbroken treatment, most famously rendered in the alto's aria of the St John Passion. In the opening number, the bass-baritone Jesus' dialogue with the soul attributes the string halos around the voices differently to the comparable passage in the St Matthew Passion. It's good to hear the familiar chorale 'O sacred head so wounded' here, too. But the big aria with austerely beautiful oboe obbligato is the thing, and so beautifully sung by Philippe Huttenlocher on my companionable Rilling set. There's a Fischer-Dieskau recording, by the way, but it's much too slow.

Beautiful exposition of those last woeful cantos, and beautiful cantata: thank you. .. so looking forward to tomorrow's sailing off into more luminous regions at the Warburg. Dorothy L Sayers (my favourite translator, as you know) say 'Of the three books of the Commedia, the least known, the least quoted and the most beloved is Purgatorio.'So here goes:


For Better waters heading with the wind
My ship of genius now shakes out her sail
And leaves that ocean of despair behind...

I agree, she has poetic flair (and she's a marvellous novelist/thriller writer). I suppose I find, as with so much poetry, that the original is sufficient unto itself so that it best benefits from a literal translation.

Of courae we're familiar with the ship metaphors after that class on Ulysses which referenced where Dante himself talks of his 'sailing'.

Took is clearly a treasure; his observations are keen and beautifully stated. Your choice of images to accompany the Dantean adventures continue to be brilliant, as well. On other fronts, we seem to have joined you in off-kilter wintry weather—we just today discovered the house has been without power for at least a couple days, as heavy wet snow and powerful winds have downed power lines and trees throughout the area. In stark contrast, and blissfully ignorant at the time, we had a lovely walk in the city and saw our first snowdrops.

He is an extraordinary man, his furrowed brow speaking of the obvious intensity with which he discusses the subject (when he says that the lower depths of Dante's hell are almost too painful for him to contemplate, we believe him). But I also wish you could hear Dr. Scafi's tender, loving reading, too - my recording of selected Cantos isn't a patch on what we hear in the classes.

So that's your storm - are you holing up in the cold or with friends who have power? Similarly it seems hard to believe the drama that has killed 10 people in the UK from the minor inconveniences of London in the snow. And Scotland has been cut off from England over land for three days. Now we have a nasty, murky thaw.

We are in NYC, so only found out about the house long distance (power is now back on there, glad to say).

Glad to hear it. Power was down in thousands of homes across the country here, too. It's been seriously bad up north, but London transport crumbled even at the prospect of snow (on Monday, when absolutely nothing happened).