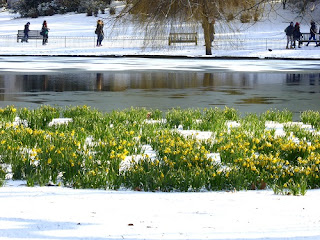 Since the major snow flurries were just around the corner when I attended Tuesday's lunchtime concert at St Martin-in-the-Fields, it's pure fancy after the event to see some of Fauré's inspirations as delicate flowers that bloom out of bitter cold, which seems to be the case with the slow movement of his First Violin Sonata. It could not have been played with more exquisite, cultured tone and phrasing than by young Maria Włoszczowska with my good friend Sophia Rahman as her equally sensitive and nuanced pianist. Here they are after the event. 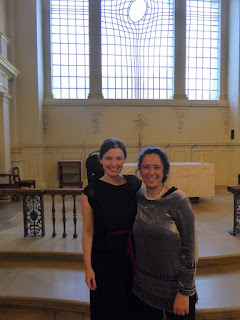 After the wonderful recital of Estonian music by the Ruubel twins Triin and Kärt in Berlin a week ago, this was an equal joy - and more of a surprise, since I hadn't heard Włoszczowska before. Though currently taking an Artist Diploma course at the Guildhall School with András Keller, she has already recorded Mozart's Church Sonatas with Maxim Vengerov, so that should give you some idea of her level. The communication shows in her features, too - that aspect shouldn't be underestimated, since it's rare to see a violinist take visible pleasure in the music - and she somehow combines the culture with a big sound; Sophia's mastery of Fauré's more turbulent writing could afford to let rip and never swamp her duo partner. I'm kicking myself for missing the Ysaÿe Sonata in the first half of the concert, but I was cycling with two heavy panniers of sheet music and LPs to hand over to friend Clare, who also came, as well as battling the east wind, and it took me 20 minutes longer than it usually does. Thighs now like tugboats. 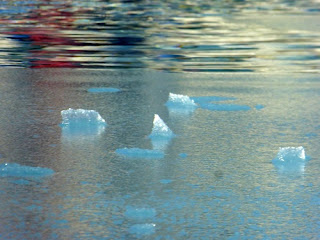 I could afford to take my time on the way back as I was working at home in the evening. And after I'd helped Clare to Leicester Square tube with her load, the first big snowstorm began. I dived into Bagariet, the superlative Swedish bakery in Rose Street, and felt all mysigt (that's hygge to the north) with my espresso and cake watching the flakes fall outside the window. The brilliant sunshine and sharp blue skies that followed meant I became a tourist wandering round Trafalgar Square with its semi-frozen fountains 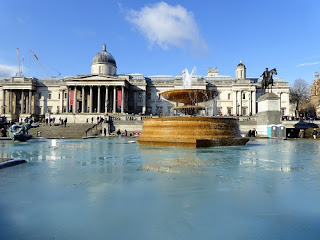 and dusting of snow on lions 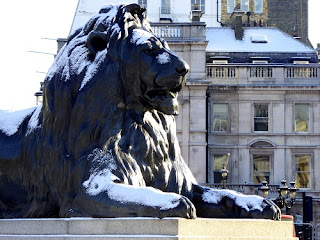 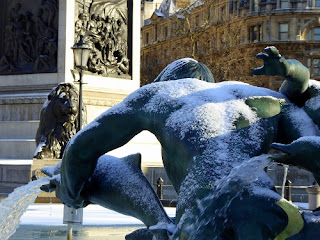 I was making my way to have a late lunch with J round the corner from Europe House, but realised I had to go via St James's Park where the daffodils were now trying to hold their heads above the snow, 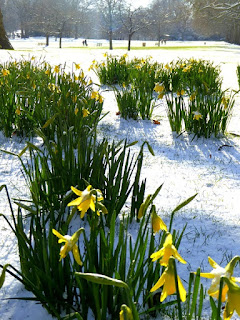 the London planes glowed in the light before the next flurry 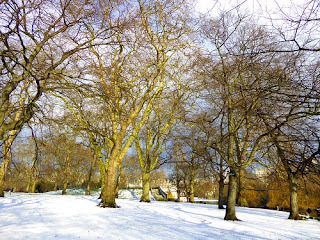 and tress by the water's edge had begun their budding. 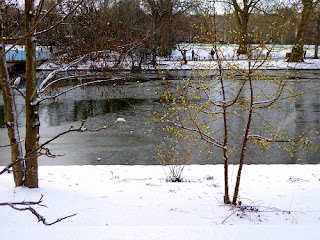 Pink and white fur here from this lady exercising her handsome dog. 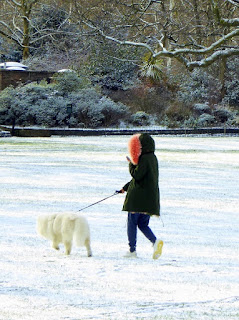 Birds were generally more eager than ever to come close in the hope of food, including moorhens 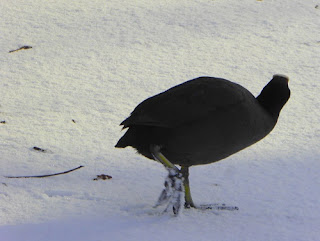 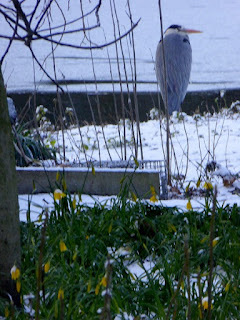 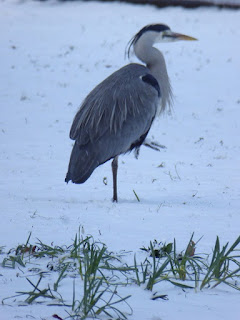 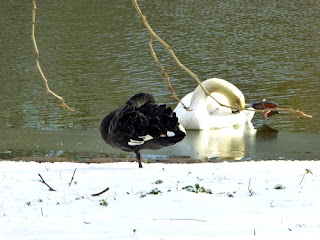 and the pelicans, as usual, appeared perfectly indifferent, albeit feeling the cold, on their rock. 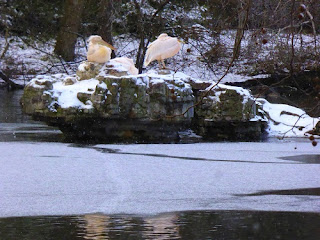 Refreshed at Itsu, I pedalled slowly home, despite being relieved of my pannier-burdens, admiring the blossoming in Paultons Square 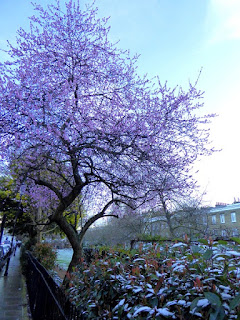 and just catching a glimpse of distant snow-clouds mountainously massing beyond Brompton Cemetery. 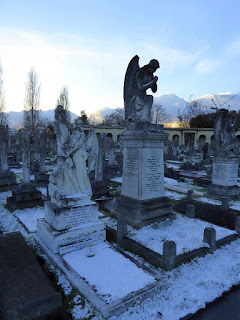 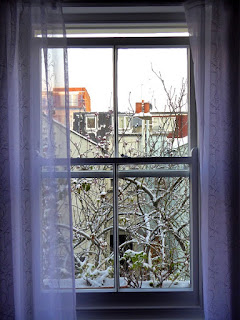 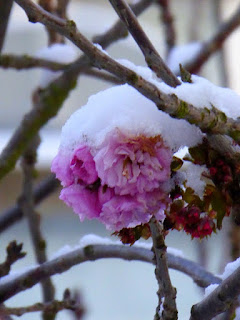 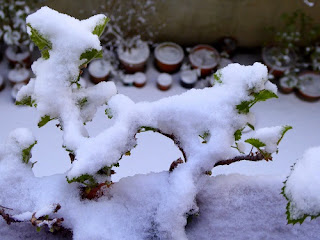 and more came in droves. 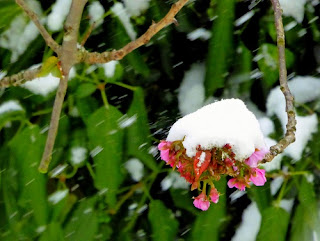 Not so much fun last night: my attempts to get to English Touring Opera's Marriage of Figaro at the Hackney Empire were aborted, despite timetables showing no imminent delays; first we were thrown off the on-time London Overground train at Willesden Junction, standing for ten minutes in another blizzard (kinda fun in its bleak awfulness), and then told that the next train and all its successors would only be going as far as Camden Road because of damage to overhead lines. So I got off at West Hampstead, took a much quicker tube journey home and spent a hygge/mysigt evening with J watching two episodes of Homeland's slow-burn but gripping Season Six.
Posted by David at 09:21

It's a delight to play the tourist in one's home town, and thus to be reminded that there is so much at which to marvel. It is nice indeed to see the daffs--and I hope the wintry weather didn't damage too many blooms.

Well, it was indeed central London as I've never seen it - somewhat supernatural, though of course at the same time VERY natural.

Thanks, ladies. It's been dull and grey for the past two days - the shifting lights of earlier in the week are goe - and a thaw is underway, always the nastiest part of the process. Still, I'll be above the Arctic Circle soon so I should get a second fix...