Beulah: perfection of the life, and of the work 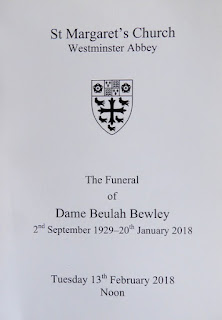 It may have been the best funeral I've ever been to, and if that sounds weird, my dear friend and opera course student of 20 years, Dame Beulah Bewley, had planned that it should be so before dementia took over. I always loved visiting her and Thomas, her totally devoted psychiatrist husband of 62 years (they were essentially together for 65), in their Grosvenor Gardens Mews home (oh, those bookshelves, and Thomas's collection of Irish masters). His favourite photograph of her hung on the bedroom wall and presumably has pride of place in the Wimbledon care home to which they moved, and where he still lives. 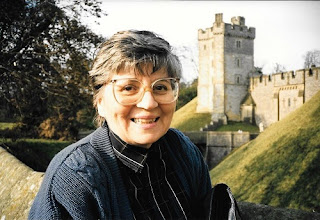 On the first occasion when the illness was some way advanced - Beulah had already survived multiple heart attacks - she described J and I as 'the musical side of the family,' which made us feel very honoured (we get on so well with the four surviving 'children', Susan, Louisa, Henry and Emma; Sarah, who was born with Down's Syndrome and a congenital heart syndrome, lived contrary to all expectations to the age of 44). On the last visit, I arrived after J to find Beulah sleeping, as she did increasingly, but she woke up, gave me the most beautiful smile and hug before turning to look at J and say 'you've lost weight' (which he markedly had). Those were the only words on that visit, but they made it all worthwhile; as it always was anyway, seeing Thomas and her sitting together. 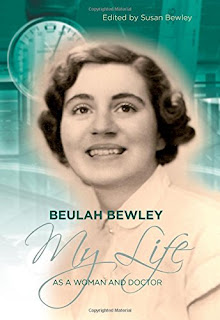 Susan took a great many recordings of her mother talking about her remarkable life, which became this finely edited, proofed and presented book. I finally read it in its entirety in the week of the funeral. 'My Life as a Woman and Doctor' is apt, since I don't know anyone who has ever kept a more remarkable balance between life and work. I can hear Beulah's voice - direct, warm but unsentimental, wry and surprisingly flinty at times - in every sentence.

She describes her comfortable upbringing both sides of the Irish border, her determination to become a doctor from the age of five - an uncle who told her 'dentistry would be more suitable for a nice young girl like you' gets very short shrift - her studies at Trinity College Dublin, the early days from which the below photo in their home within Tooting Bec Hospital was taken, balancing part-time work in pediatrics and family planning (in which she was something of a pioneer, later finding her sensible views on abortion echoed in David Steel's pioneering bill*) before academic retraining in research into public health (starting with a major study in smoking among schoolchildren). She was made a Dame in 2000 for her services to women doctors, explaining the possible reasons with typical directness. 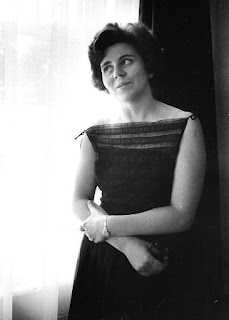 I personally treasure the friendship of Beulah and Thomas especially because they were among the few people I wanted to go out and have supper with at the time of my depressive illness (and they asked us a lot). There was never any pressure to 'perform', even if they also invited guests I didn't know, because boy, could they talk - usually at the same time. They also came to various events including our civil partnership lunch party - the below photo I don't have in electronic form, so it will have to do with the rather odd bleaching effect from the flash - 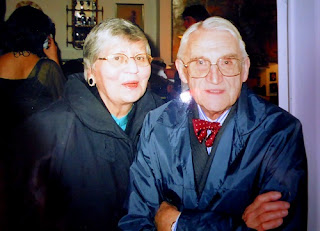 and to hear J singing. It was after a splendid concert to celebrate the work of 'Ireland's Minstrel', Thomas Moore, that Beulah decided she wanted J to sing 'Believe me, if all those endearing young charms' at her funeral. So he did, very wonderfully though I say so myself, between Henry reading Yeats's 'The Lake Isle of Innisfree' and Emma giving the most evocative tribute. 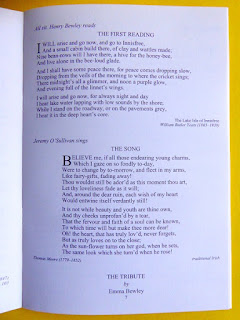 I think we all admired Rev Ralph Godsall's sermon for reinforcing the 'woman and doctor' aspect, the sense of a life supremely well lived, and I'm grateful to him for referring to a memorable line and a half from Edith Sitwell's Eurydice:

Love is not changed by death,
And nothing is lost and all in the end is harvest.

Hannah, Beulah and Thomas's only grandchild, daughter of Susan and her partner Barbara, read Revelation 21: 1-7, and the professional choir sang superbly. I blush to say I didn't know either Tennyson's 'Crossing the Bar' - the poem he always wanted placed last in any collection of his work - or Parry's eloquent setting of it (one to set alongside the Songs of Farewell which are among the glories of a cappella choral writing). 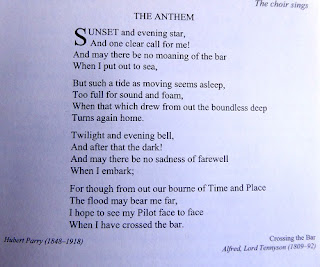 Here's the only decent performance of it I could find on YouTube.


I felt that the music, including three of the hymns to which towards the end she could still sing along with, was like Beulah, too - unpretentious, seemingly simple but with a very singular lucidity. Despite a bitterly cold, wet day, St Margaret's Church also seemed so bright; I took this photo after the service more or less from where I'd been sitting. 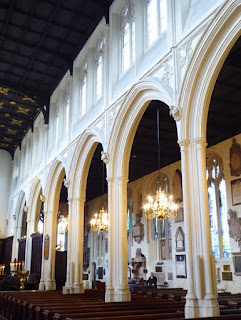 At the refreshments in Church Hall, in addition to warm words with most of the family, I also saw a student I'd really liked who'd come along at good friend Beulah's behest, Kate Broadfoot, looking very stylish despite the fact that her legs won't do what she wants them to (at 87, she's like my mother, almost the same age, in that respect - indignant that her body isn't in as good a shape as her mind). I then had hours to spend in town before what turned out to be just the tonic, Iolanthe at ENO, so first I went to meditate, as I recently did very regularly, in Westminster Abbey's Chapel of St Faith, taking a look on a circuitous way out at the tomb of Mary Queen of Scots (this is the only shot I snuck in before I realised I wasn't supposed to, honest), 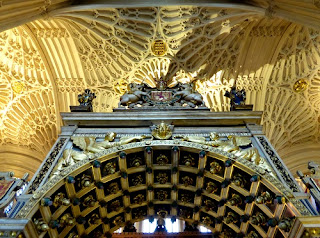 and then walking across St James's Park, where the pelicans didn't seem to mind a cormorant (or seagulls) sharing their rock, 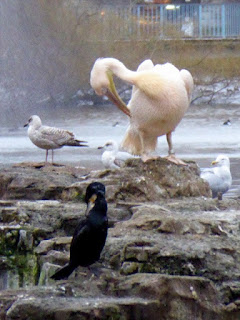 to the National Gallery, which has a marvellous free exhibition of Degas pastels and drawings from the Burrell Collection, not all of which I'd seen up there - though 'Jockeys in the Rain' is still a highlight for me, such a singular composition - 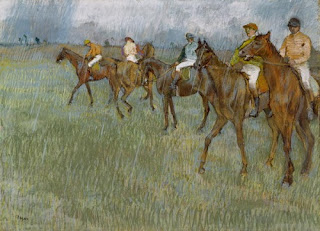 and on to tea at Maison Bertaux, a rare treat these days (it's very pricey, but Michele - only just found out it's only one 'l' - keeps it as it always was). And there I read a substantial amount of the wonderful autobiography, which I finished this morning. Susan now has her work cut out piecing together Thomas's memoirs. 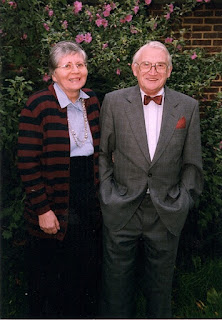 *I modified this sentence slightly following Susan's comment thus: 'I think her views were probably formed well before 1967. As part of my own thinking about this as an Obstetrician/Gynaecologist, I remember the stories she told me as a medical student seeing a woman die of septic illegal abortion, and knowing that the safer option for rich women was to come over to the UK if they got pregnant even in 1940s/50s.'
Posted by David at 08:21

What a truly beautiful obituary to a wonderful human being.

Thank you, Gillian - just how wonderful she was became even clearer with the service, and the book (available on Amazon, by the way).

This is such a lovely tribute, a wonderful celebration of a life well-lived.

I thought you might especially like to see that Beulah chose 'The Lake Isle of Innisfree' as one of the readings.

A remarkable life remarkably remembered and celebrated. Thank you so much for sharing.

What a splendid account, you will have to come to my funeral you write so well and your dear friend Beulah would have been so pleased with all the thoughtful details, a pleasure to read.

I'm so pleased it has had such a warm response both here and on LinkedIn from folk who never knew Beulah - one hopes for a sense of the person and I did love her so. One of Beulah's daughters read the account to Thomas on Sunday, and I'm glad to see he nodded approval and laughed in recognition, so that was good.

May you outlive me, Laurent! I want a full orchestra and soloists, of course...

What a lovely tribute to a remarkable person. Very moving.

Thank you, Josie. I wish you both could have met her and Thomas.

Thank you, David, for this wonderful piece of writing with pictures and links. Your description of the service and your day have nourished my morning. I am a friend of Susan's. I never met Beulah, but I have read her memoir, and know her daughter, so I'm aware of how much difference she made in the world.

'How much difference she made in the world' is in itself a lovely tribute. I'm so glad to be getting to know Susan better.

Next step is to buy a fig tree for the back yard to be called 'Beulah'. We already have a viburnum called 'Joe' in memory of a friend who died shortly after his 70th birthday, and the connection is always so direct when it flowers around that time.