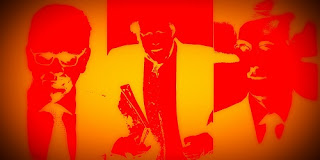 Forgive the excessive alliteration, but it seemed a neat way of conjoining this week's Dante and Bach discoveries. The latter is Richard Stokes's suggested translation for 'Leichtgesinnte Flattergeister,' the title of Cantata BWV 181. The former refers to Ulysses and Guido da Montefeltro, speaking as tongues of flame in, respectively, Cantos 26 and 27 of Inferno. The Eighth Circle, heading towards the bottom of the funnel, is reserved for 'Simple Fraud', and the eighth of its 11 bolgie contains these 'counsellors of fraud in war'. If we widen that definition to 'fraud in words', then it suits the three mini horror clowns I've rather crudely coloured in flame tones above - Gove, BoJob and J Rees-Mogg, the GoBoMo triplets, folk who use a rather silly form of cleverness to deceive the gullible, though God knows they're petty demons compared to Dante's heroic hell-dwellers. 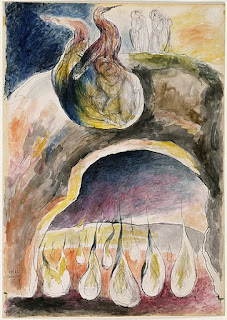 Once again, following on the heels of the talking twigs, our artists are confounded by the fact that it's the flames that speak, not figures within; but you have to allow Blake and co their visual licence. What's said, as our reader Dr. Alessandro Scafi and interpreter of deeper meaning Prof. John Took underlined in Monday's Warburg session, is tauntingly selective and if you don't have the entire context - even this Ulysses/Odysseus narrative departs from the Greek sources, and Guido da Montefeltro is not as familiar to us as he was to those living shortly after his death - you need plenty of glosses even before the meaning can be plumbed. 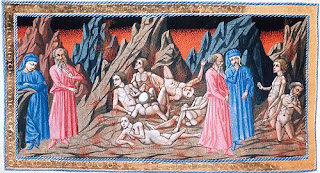 Dante gives us Ulysses' last journey, but not as we know it from Homer. After leaving Circe, he does not head for Ithaca and the moving/violent homecoming of The Odyssey: 'neither the sweetness of a son, nor compassion for my old father, nor the love owed to Penelope, which should have made her glad, could conquer within me the ardour that I had to gain experience of the world and of human vices and worth' -

'A devenir del monde esperto' - this had been an earlier stage of what Prof. Took calls 'Dante's problematic humanity'. After the death of Beatrice, he spent time in the Florentine philosophical schools acquainting himself with Cicero, Boethius and, for him the greatest, Aristotle. His discoveries are noted in the Convivio. But this absolute enthusiasm for life-knowledge needed rethinking in the contet of his spiritual existence - 'quickened by grace and revelation' (Took) - and the Divina Commedia marks Dante's 'theological encompassing of reason'. 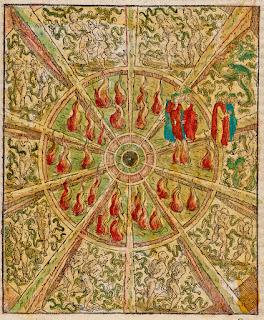 So did Dante see Ulysses as a dark image of his own earlier, 'recklessly self-confident' reasoning? He certainly refers to him a lot; and elsewhere he uses the idea of a physical journeying as the image of a spiritual one (the oceanic image crops up in Paradiso's Canto 2).  The below Doré illustration, by the way, is for The Rime of the Ancient Mariner, but it fits Ulysses' last journey towards the extreme west well. 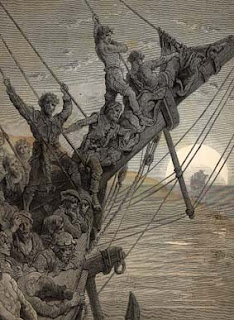 Here Ulysses goes beyond the boundaries, marked physically by the Pillars of Hercules, and his crime is to use his tongue to persuade his old remaining company to follow him to what turns out to be extinction: 'you were made not to live like brutes, but to follow virtue and knowledge' ('fatti non foste a viver come bruti, ma per seguir virtute e canoscenza'). Is this hubris? Or, more precisely, in John Took's so-eloquent phrase, how 'the word fractures communion for pure self-interest'? 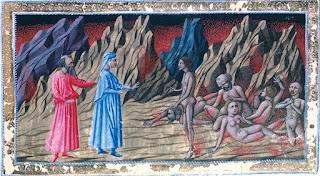 The end finally comes in the whirlwind from the high mountain surmounted by Eden; it sweeps the men to destruction.

There's fabulous drama in Guido's speech. The man of arms became a Franciscan, 'believing, so girt, to make amends; and surely my belief would have been fulfilled, had it not been for the high priest, may evil take him! who put me back into my first sins' -

This is Pope Boniface VIII, Dante's deadly enemy, who asked Guido's advice in subduing the Colonna family in Praeneste/Palestrina. 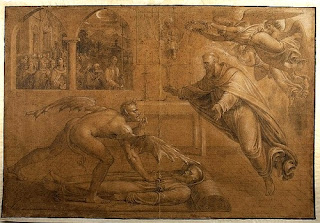 I love the dark humour of the black cherubim who seizes Guido's soul (depicted above by Joseph Anton Koch in a drawing in the Thorvaldsen Museum - he is also the artist below), saying, 'Perhaps you did not think I was a logician!' ('Forse tu non pensavi ch'io löico fossi!'). Then he drags Guido off to Minos, who twists his tail furiously eight times in judgment on the sinner destined for 'the thieving fire'. 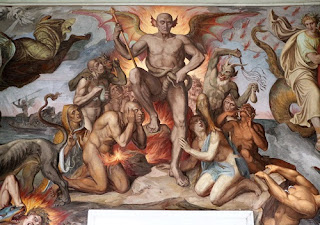 Next week we descend to the very bottom to meet Judas, Brutus, Cassius - and Satan. Io tremo.

Bach's BWV 181 takes us from the threat of hell to heavenly consolation via the New Testament reading for Sexagesima Sunday, the Parable of the Sower in Luke 8.4-15. The sower in question casts seed on four types of ground which image the varying types of receptivity to Christ's word, from stony to fertile. 'Leichgesinnte Flattergeister' is unusual in beginning with a bass aria in which some have detected the pecking of the birds who gather up the seed on the worst soil. 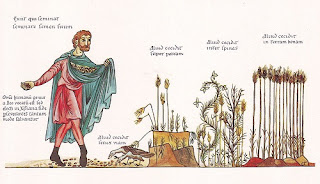 There's a helpful connection to Dante and Milton with the appearance of Belial in the aria's central section. 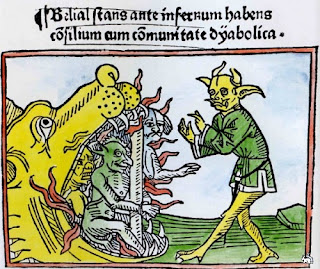 It feels to me more like an operatic number by Handel, strengthening the notion of theatricality in the cantatas. The recitatives are highly expressive, and in the short tenor aria, I love Rilling's choice of vivid harpsichord, mirroring the thorns of the text, against the bassline - throbbing at 'höllischen Qual' ('hellish torment'). The second recitative turns us to comfort, and a chorus at last, bright with trumpet and a soprano/alto duet in the middle. Gardiner praises its 'madrigalian lightness', a good way of putting it. This is a short cantata, but as original as any. 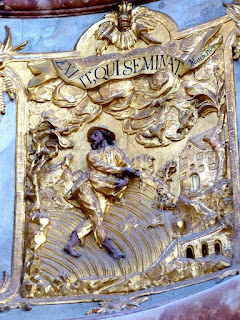 I am with you but very much behind you knowledge-wise on these lines of thought - the lines of thought are tremendous and should be normal in all educated people. These myths are real, in our minds. In a sense and taking a parallel route, the Victorians were right to see Greats as the central discipline. You are amazing. Could you write a book on this sort of thing? Incidentally cherubim is the Hebrew plural of cherub.

You see, it's precisely because of such slips that I could never 'write a book on this sort of thing'. All I aim to do here is to try and distil the wisdom passed on by our Warburg Dante and Virgil, Scafi and Took. And I find it ends up taking me longer than I had anticipated. But at least we do develop the arguments in the 45-minute discussion at the end of the session. If you should be in London on a Monday, you absolutely must come along - each class is entire of itself.

Glad the Babette evening seems to have gone well. The literature is excellent. But not even mock-turtle soup?

The soup was mock turtle as killing turtles is now forbidden. On the menu I just put "not turtle". But it and the rest of the Feast were sensational ( I mean that....it was amazing)- matching the look of the dishes in the film and of high gastronomic quality - notably the quails.

Can you email to me the dates etc of your Monday course?

I shall - but first I need the Warburg to send me the actual dates, not the mess that's on their website, where January seems to be confused with February. I know the final Inferno lecture-reading is this coming Monday, but there may then be a half-term break. The course certainly runs into the summer term.

I fear we may have eaten real turtle soup in a restaurant on the edge of the Palace of Versailles as part of a lunch for Les Talens Lyriques - there was no sign of 'mock' on the menu... Delighted it was a success. Shall never forget the Gattopardo spectacular.

So many tantalizing phrases in your post and so utterly apt to our own times, with "fraud in words" heading the list. You are lucky to get a tour of hell with such erudite and articulate guides.

Yes, and I love it that they always let us know how they feel about being there. Dr. Scafi even told us about his terrible cold and how his wife didn't want he to come, but he said, 'It is for Dante, I must'. And in our most recent class, Prof. Took told us how he almost couldn't bear to deal with the very depths of hell.

As for the word-fraudsters, I feel ours are petty in comparison with Dante's choices (he likes something heroic about them, as in Ulysses' case). I also take the point that there are ten bolgie or zone in the ninth circle devoted to 'simple fraud'; 'treacherous fraud' belongs to the tenth circle.