Magnificent severity from Bach and Dante 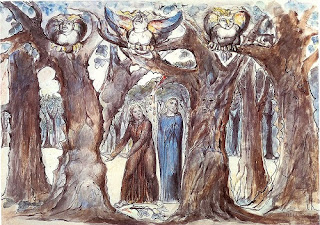 This week's Monday lecture-reading at the Warburg with our Dante and Virgil (though it would be hard to say which was which), Dr. Alessandro Scafi and Prof. John Took, seemed daunting: we entered the Inferno's Forest of Suicides with harpies above in Canto XIII and heard the unhappy end of Pie(t)ro delle Vigne (della Vigna, 1190-1249). Frederick II's right-hand man, he was brought low by envy and slander, and in desperation took his own life (the scene below, of Piero in prison before his suicide, is taken from a 1911 silent film based on the Inferno). 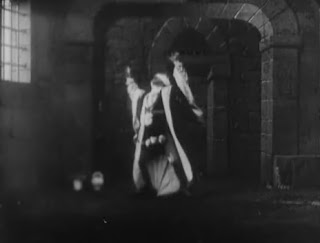 Our artists, including Blake up top and Joseph Anton Koch below, are at a bit of a loss how to illustrate Dante's depiction of the suicidal souls. He has them not as human figures trapped within trees, but voices coming from the spiny branches, which ARE the souls. The one which Dante snaps off, on Virgil's instruction, asks: 'Have you no spirit of pity at all? We were men, and we have become plants'. That seems a harsh fate when people are driven to take their own lives for all sorts of desperate reasons; one of the students in the class asked how it would be applied, say, to Holocaust survivors who years after their persecution can no longer live with themselves. 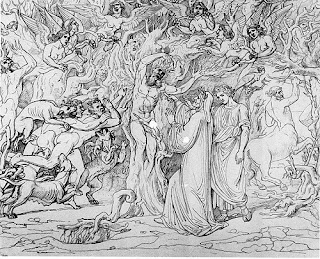 John Took's answer was, as before, that Dante's overwhelming compassion tempers the harshness (and I also read online a reader who had toyed with suicide during a depression deciding that the thorny-tree image is apt for how one feels when every moment of life is pain - I know something about that from my past episode too). The key stanza is

('My spirit, at the taste of disdain, believing by death to flee disdain, made me unjust against my just self'). There it is, in one line, the essence of so many of the Inferno's suffering souls, no less applicable to Francesca whom we visited the previous week - 'ingiusto fece contra me giusto'. Again there is the alienation of blame, the strategy for self-justification, the infernal circularity with no way out. We all know about that, so we can identify with Piero, too. 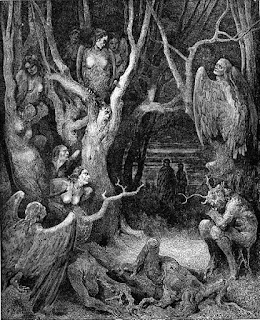 But there's more. As a master of Latin prose and rhetorical skill, Piero needs the eloquence of his calling, and Dante provides it in the arrangement of repetitions, extending even - slightly absurdly - to the surrounding narrative as well as the speech: 'Cred'io ch'ei credette ch'io credesse', 'My belief is that he [Virgil] believed that I must believe...'). Whereupon someone recalled Sir Humphrey saying something similar in Yes Minister ('oo eez Sir Amphrey?' asked Dr. Scafi, to general amusement - and why, as an Italian, should he know - though while in India, we saw a candidate on that country's Mastermind answering questions in his specialist round on that classic BBC comedy). And there was a fun parallel - for Sir Humphrey, too, was 'he who held both the keys to the heart' of his master. 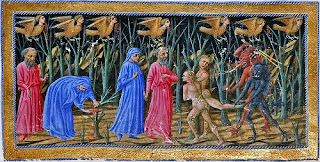 As for the topology, which stays the same for the rather puzzling sequel to Piero's explanation (the chase of prodigals pictured above), although Dante talks about Piero being a 'great thornbush' ('gran pruno') in Line 32, he has earlier described 'not green leaves, but dark in colour, not smooth branches but knotted and twisted no fruit was there, but thorns with poison', which gives me licence to think of those terrifying thorny giants from Brazil which are to be found in abundance in Palermo's amazing Botanical Gardens. Any excuse to wheel out three specimens I snapped on our first visit: 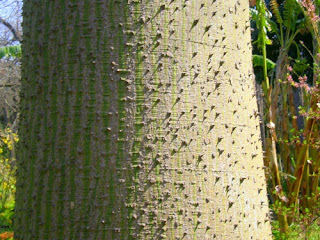 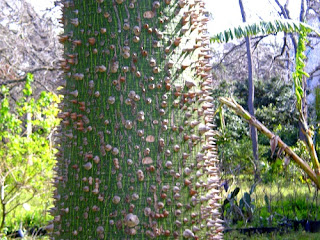 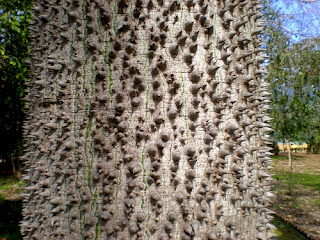 I find fascinating the link between these mortal trees and the metamorphoses of antiquity; Dr. Scafi cited Daphne and the three sisters of Phaeton, while Dante seems to invoke Virgil's tree-bound Polydorus whom Aeneas discovers transformed in Thrace. My question was whether Dante was doing something completely new in giving his trees the voices of former humans - again, not figures within the wood, but the wood itself? Yes, came the answer, as with so much else, he has transformed the original transformations. 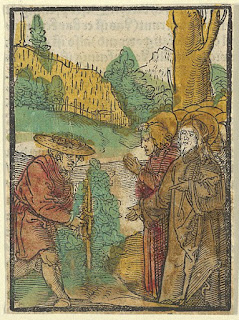 I expected to find something sweeter in the Bach cantata for Septuagesima Sunday, BWV 144, which takes its title from Matthew 20. 14 - 'Nimm, was dein ist, unde gehe hin' ('take what is yours, and go your way'), from the Parable of the Workers in the Vineyard. But all is austerity here. The men plunge in without preface in the opening chorus, a short fugal elaboration with multiple repetitions of 'gehe hin'; the alto air is wonderfully severe, with its low, rich pulsing strings. Rilling and that superb contralto Helen Watts conjure the necessary grandeur here. 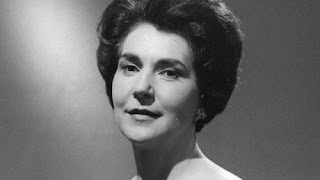 There's some softening with the two chorales, but even the soprano solo (Auger again) is in the minor, with spare support from oboe d'amore and bassoon.  A short but far from conventional cantata for the Leipzig choristers in 1724 to get through quickly before the winter cold inside the Thomaskirche froze them to the spot.

It's such a rich time, with this weekly Bach and Dante running alongside my Monday classes on another work of inexhaustible riches, Wagner's Das Rheingold. Our only genius of the stage Richard Jones returned this week to talk about his Ring, as well as his recent Royal Opera production of La bohème, and he was more relaxed and funnier than ever. Maybe more on that anon; but suffice it to say that once we've left Wagner's 'preliminary evening' behind, we'll be moving on to another strange masterpiece, Janáček's From the House of the Dead, so the revelations should keep on coming.
Posted by David at 09:29

I once heard Dante read in Italian ( by an English girl immersed in Italian, and maybe in one way the non-Italian Muttersprache helped me). For the first time I heard the music. In a play the music is more difficult to hear, especially as directors nowadays move in the direction of having the actors naively acting as the action seems to indicate, and the music of ( for example ) Shakespeare is lost ( Dadie Rylands with the Marlow at Cambridge opened my eyes to the music of Shakespeare but was criticised for not having the actors throwing themselves around the stage as is desired nowadays) The Latin languages should I suppose have the greater propensity for beautiful melody, perhaps Italian most of all. And music can come into prose also. As was said of Lettres de Mon Moulin, " Daudet possedait le don delicieux de la melodie"

Yes, Dr Scafi's reading makes this sound like the most beautiful poetry on earth. You should make an effort to come along one Monday. As for Shakespeare, whenever I hear it finely spoken across the board, I assume that the director has worked hard with the actors - though that aspect never wins him or her the credit deserved, since it's speculative. The RSC went through a terrible spate of whispering delivery, and the last things I saw there - Henry IV 1 and 2 - were abysmal in every way. The Globe excelled at projection and meaning for a while.

The depiction of suicidal souls as voices in the tree branches is quite surreal. I am reminded of a novel I finished recently, by Han Kang, a South Korean writer, called The Vegetarian. Late in the story, as the protagonist descends into madness, she does endless handstands. It turns out she is feeling an intense kinship with trees, and, as I recall it, her arms and hands are (in her imagination) sprouting roots. While Han’s source for the human as plant idea was apparently another South Korean writer, it seems she could easily have been taking a cue from Dante.

There's also Daphne, of course, turned into a laurel in her plea to escape Apollo. The final scene of Strauss's opera depicts the rooting with hallucinatory aural magic. In our discussion, as I think I mentioned above, I asked whether Dante was first in actually having the trees, or parts thereof, speak, rather than the human to be seen manifest within. It presents a problem for visual artists. Same with the passage I'm about to write up, where Ulysses and Guido da Montefeltro speak as tongues of flame. Your book sounds fascinating: would you recommended it?

Oddly enough, I d9n’t recommend it, even though it won the Man Booker. But it is short, so if you are curious, it’s not a big investment of time. But your Dante excursion (one I’ve yet to take myself) appears to me to be much more worthwhile. Right now, I am enjoying Denise Mina’s The Dead Hour, a mystery set in Glasgow. After that, not sure what comes next!

Too many essentials in the pile at the moment. I confess that I haven't yet filled in the gaps between our Dante sessions; I've been absorbed by a very singular novel by American Arthur Phillips (his first, I think). Though it's called 'Prague' - the mecca for young Americans in the early 1990s - it's actually set in Budapest at that time. I think its experimental quality must owe something to the great Hungarian novelist Peter Esterhazy. Nearly finished.