Lights in the dark, cold and wet 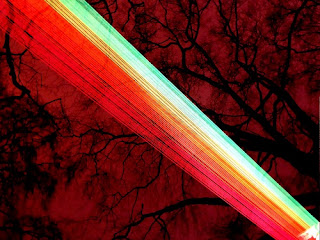 Lumiere came to London for a second time to brighten a January weekend, and though what I saw only had a couple of highlights to equal the more widespread success of 2016, I'm glad I made it out on a beastly Sunday evening to see them. Westminster Abbey was again the classy zenith, with another contribution from Patrice Warriner lighting up new aspects. Then it was the 20th century saints above the west door; this time their surroundings, in a constantly shifting light-show, 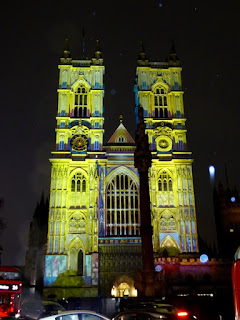 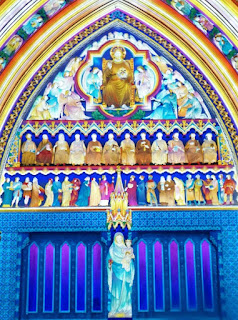 Possibly the best view of Hawksmoor's west facade is coming from St James's tube, and crossing the road which leads to Victoria, 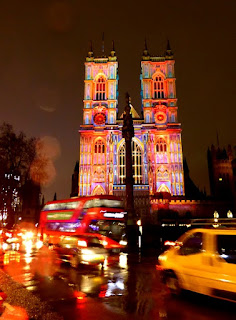 though fine details without a zoom were best seen from standing right in front of the towers, 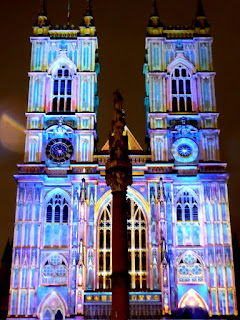 and there was another good viewpoint further away, between London planes, from the terrace of the QEII Centre. 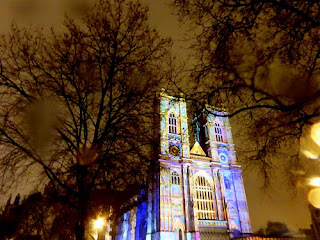 Scott's door, completed after his death by his son, has all the right Gothic ingredients for the same sort of illumination that 'painted' the west end saints. 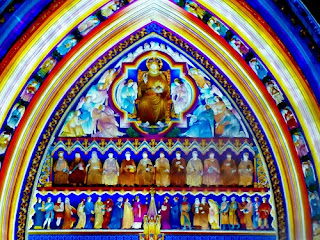 Over the main entrance are figures carved by Messrs Farmer and Brindley. Christ in Majesty blessing the Church and the World is surrounded by angels. 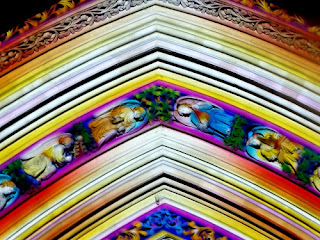 Below them are seated figures of the Apostles and underneath are figures in procession which represent the science and the arts alongside the royal builders of the Abbey. On the central pillar the Blessed Virgin Mary holds the Crowned Christ in her arms. 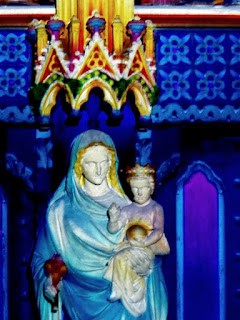 The pillars to the side are fine, too. The rain stopped as I walked up a (nothing doing) Whitehall. The illuminated balloons by Collectif Coin in Trafalgar Square would have been fine without the soundtrack - a problem of quite a few installations; less son, more lumière, please. 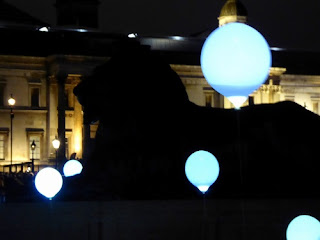 It was quiet in St James's Square, though well peopled as I walked through the centre admiring the multihued cords hung from tree to tree - Spectral by Polish artists Katarzyna Malejka & Joachim Sługocki. 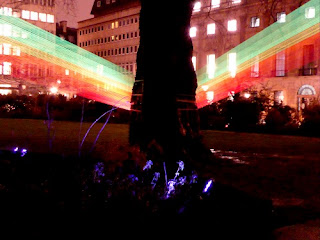 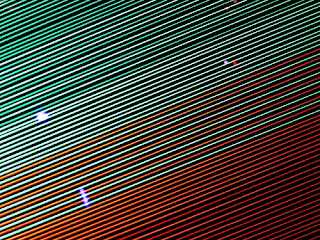 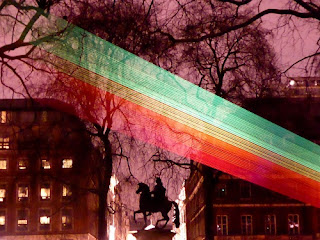 I'm glad I walked through the passage of St James Piccadilly to reach the thoroughfare, because I had forgotten that Arabella Dorman had followed up her first response to the humanitarian refugee crisis, Flight, with a second, Suspended - a harrowing explosion (I think she called it a bomb) made out of hundreds of items of clothing discarded by refugees arriving on the beaches of Lesbos. 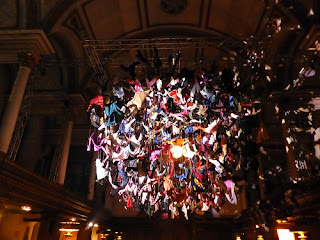 It hangs like our bad conscience above the heads of the congregation. How could one not be moved by this, especially by such details as the bib with 'My 1st Christmas Ever!' on it. 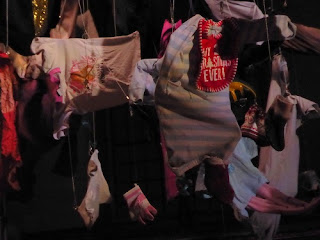 Some Christmas that would have been. Sadly the installation has now been taken down, having run its due time, but St James is such an impressive institution for commissioning work like this.

Here seems as good a place as any to put up some long-withheld pictures of another striking illumination, from a year back (there was another before Xmas, but we didn't make it). 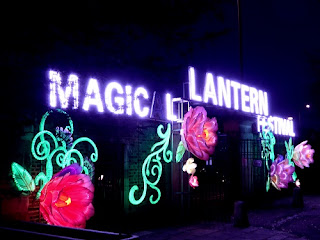 I came across the Chinese-lantern illumination of Chiswick Park and House by chance, on one of my regular cycle rides down there via the riverside. There was an admission charge to the display proper, but the tree-lined avenue was free and had some pretty blooms along the way like this one behind snowdrops, 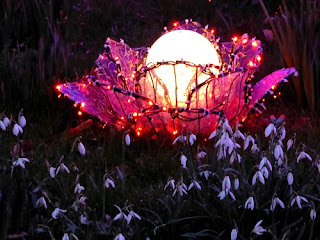 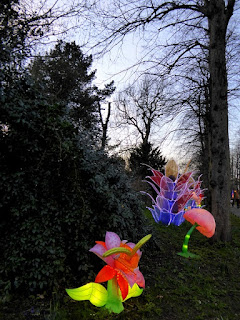 as well as an even more impressive gateway the other end. 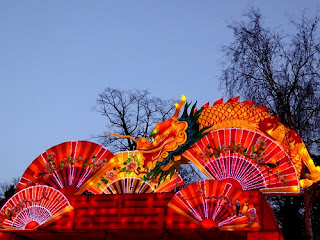 I walked back, wheeling my bike, and snuck into the garden in front of the greenhouses which accommodate a major camellia collection. 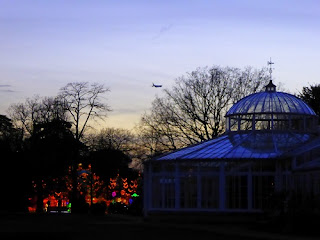 The sounds of the distant fun-ground blended with the chatter of multiple blackbirds at sunset. 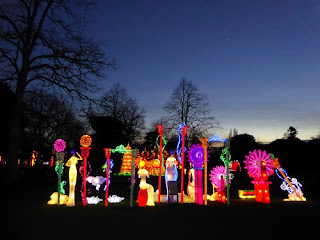 The illuminations made a fine foreground to the Palladian villa 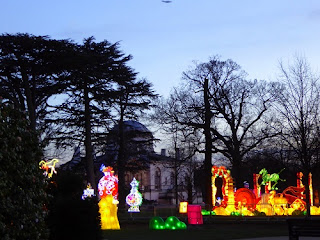 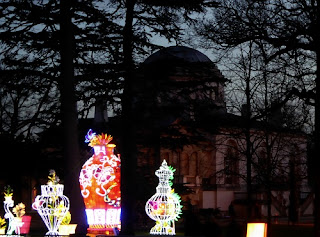 and created another, forbidden-city palace to rival it. 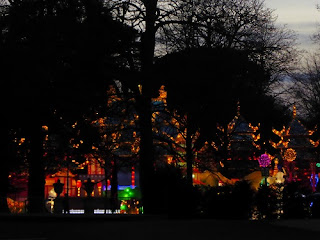 As the last of the natural light began to fade, I walked back, catching a reflection in the greenhouse window 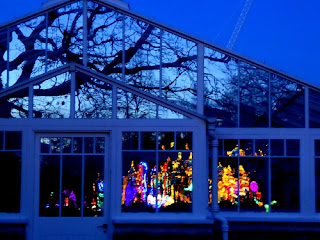 and one more general vista. 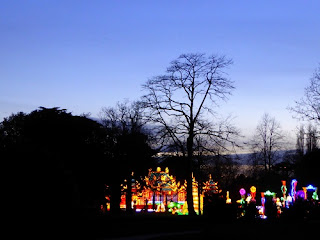 Oh! I wish I had seen some of this! In London now, but it all just passed me by...loved the installation of refugees clothing and wih I had seen it. Thanks for all these great pics!
XXXS

It's a heartbreaker, isn't it? I meant to tell more people before the display period for the installation was up, but as always time overtook me.

It is mind-boggling what can be done with lights alone. Thank you, too, for noting the Dorman work, compelling even from this small glimpse.

It was chastening. People viewed it respectfully.