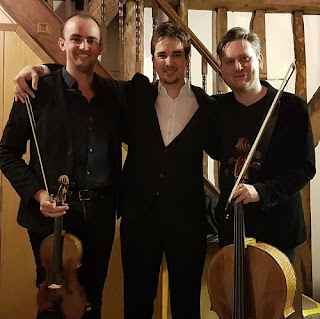 Not all at once, mind you. Musicians I got to know, to a greater or lesser degree, at the Pärnu Festival (first report of three to date here) are playing, or have played, in various events spanning just over a week as follows: clarinettist Matt Hunt and bassoonist Amy Harman in one of Ensemble 360's Wigmore concerts (not Matt, alas, in the second, which I caught on Sunday morning - though there he is below, anyway, with Amy as pictured by top Estonian photographer Kaupo Kikkas - they've given duo programmes too), violinist Ben Baker and cellist-conductor Jonathan Bloxham, our Europe Day 2017 duo, at Kings Place; still to come, Estonian Festival Orchestra leader Florian Donderer with Christian Tetzlaff and company next Sunday, and horn-player Alec Frank-Gemmill with the Scottish Chamber Orchestra winds the following lunchtime. 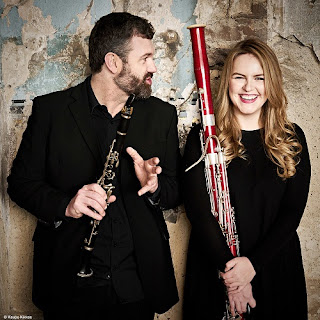 Pictured up top are Ben, Jonathan and Ben's regular duo partner Daniel Lebhardt. Their Sunday evening concert at Kings Place, held under the auspices of the London Chamber Music Society, was a showcase for the astounding chamber music to be heard at Jonathan's Northern Chords Festival. The addition for the third of three great works was viola-player Eivind Holtsmark Ringstad (pictured below by Nikolaj Lund), whose playing first impressed me when he was introduced by Leif Ove Andsnes at the Dulwich Picture Gallery as one of two outstanding young Norwegian performers. His first CD is just out, of the Walton and Sinding viola concertos - can't wait to hear it. 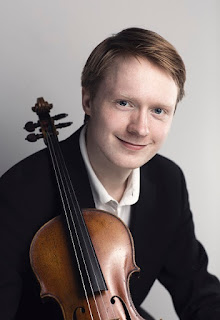 He had, relatively speaking, the easiest deal of the evening, Ben and Daniel the toughest since they played in all three works - and the piano parts in both the rippling Mendelssohn Second Piano Trio and Brahms's G minor Piano Quartet are absolute killers; Lebhardt hardly seemed to break a sweat as he played with both weight and total clarity, sounding fabulous in Kings Place acoustics and never overpowering the strings (and oh, those light rapid runs in Brahms's Rondo alla zingarese!). In both the enigma of Janáček's Violin Sonata, the elusive ideal fading to a ghost voice, and the Mendelssohn uncannily perfect movement endings and transitions were the signs of absolute mastery, chamber musical playing of the highest order. And the articulate energy could take the breath away in the two tidal waves of Mendelssohn's opening movement as well as the fairy music of his scherzo. The arrival of the chorale in the finale is always such a great moment, too - shall never forget how it followed on the heels of the muezzin's call to evening prayers in an open-air concert at the D-Marin Festival in Turkey the summer before last. 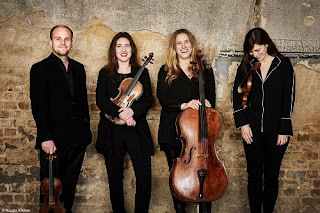 With Brahms, it's the barline-dissolving genius of his unique songs without words that I get to love ever more; the greatest miracle in that respect, shared between Lebhardt and strings, is the Intermezzo's second melody which breaks into laughing triplets. But the revelation of the day was the Andante, un poco adagio of the Piano Quintet as played in the Wigmore morning coffee concert by - yes, these superb artists in Ensemble 360's army of generals all have to be named - Benjamin Nabarro, Claudia Ajmone-Marson, Ruth Gibson, Gemma Rosenfeld (pictured above, I think, also by Kaupo) and Tim Horton. This is a song that just goes on into seeming infinity, and its little adornments make the heart leap. Another one you can play at my funeral. I must have heard the work before, because I remember the vintage Brahms shadowy/big-boned scherzo; but the performance can't have been anywhere near as good as this otherwise the slow movement would have been carved on my heart back then.

No less miraculous is Martinů's Nonet. The more I hear of his huge output, the more I'm in awe: is there actually a dud? Certainly not among the later pieces, and this one is vintage in its wavering between major and minor tonality, the harmonic no-man's-lands, the sudden shafts of sunlight which quickly go behind the clouds (especially in the emotional slow movement). 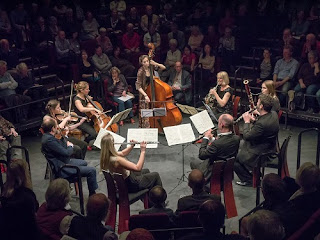 The above photo looks like it must be of the Nonet, but of course with Matt playing clarinet rather than Tim Orpen (the other musicians not so far encountered are double-bassist Laurène Durantel, very much the central underpinner, oboist Adrien Wilson and horn-player Naomi Atherton). Apparently the Estonian Festival Orchestra's international treasure had had to fly off in the small hours after Saturday evening's concert, which I had to miss in favour of the musically less rich LPO Stravinsky launch. That did at least mean that I got a double helping of the sublime Juliette Bausor, recently appointed the orchestra's principal flute, and a better is not to be found anywhere (though Philharmonia principal Samuel Coles was also amazing in Paavo Järvi's Thursday Dvořák). 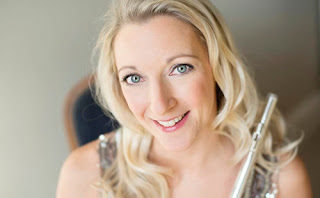 In a serendipitous footnote - which I hope didn't come across to our flautist as potential stalking - I'd brought along a second-edition copy of Martinu's Julietta in the Supraphon recording for my concert companion David Thompson  (I already have the original CD format). He'd bought it only a couple of weeks earlier, so I thought - Juliette/Julietta for Juliette Bausor? Why not, as a tribute to the exquisite playing? And she was very gracious and natural about accepting it, didn't seem to think me weird at all. Anyway, I was careful not to outstay my welcome in the Green Room, but quickly took my leave after exchanging a few words with Amy. The main point is that I've now heard Ensemble 360 for the first time - resident as they are in South Yorkshire, we don't get to witness them much down south - and it was love at first sight-and-sound.
Posted by David at 10:24