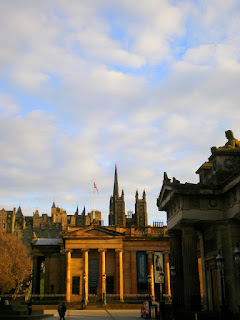 I knew it even in my four-and-a-half years there, but how much more so now: Edinburgh has to be one of the top five (I'd say three) most beautifully situated cities in the world. Looking back, I surely fell in love over 30 years ago when the train drew in under the volcanic rocks on which the castle is built. And arriving the Friday before last was an especially heart-leapy moment, given the late-afternoon mixture of brilliance against black and blue skies. The journey through East Lothian softens up the traveller; usually there's a dynamic play of sun and clouds over sea and land. Then there's Berwick Law looming in the distance, soon to be replaced by the more substantial mass of Arthur's Seat. And then the familiar, comfortable tenement buildings, the jutting jaw of Salisbury Crags, and you're there, right in the centre of things.

I had an hour to amble through an alternation of Prince's Street Gardens and George Street (I was on my lightly-laden way to meet friend Ruth in the Filmhouse Cafe before going to talk to Neeme Jarvi and to attend his predictably idiosyncratic, ultimately unforgettable Usher Hall concert. Tracing a familiar route which would eventually lead to my old home in Dundas Street, I was impressed by the natural lighting on the Royal Scottish Academy to the south 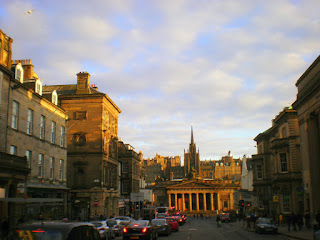 and, never the same twice, the view north towards Fife over the Firth of Forth. 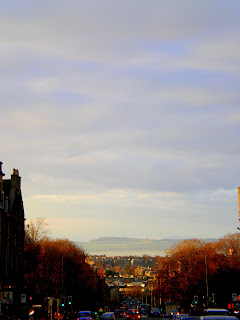 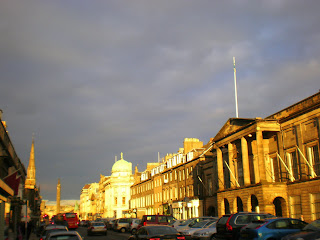 And the still only semi-leafing trees let me see more of the castle rock than one usually does from Princes Street. 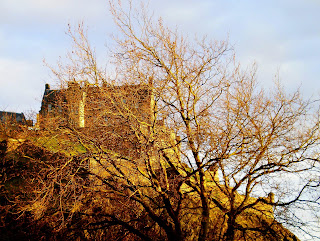 Strange: I'd never taken the last-leg route before, through St Cuthbert's cemetery, though I seem to remember singing in Bernstein's Chichester Psalms and the Dvorak Te Deum in the church itself. 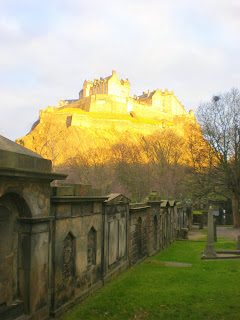 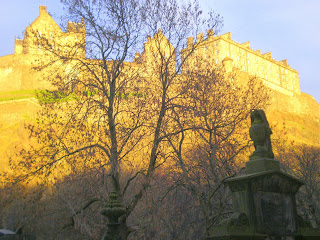 That's another fascination: there are probably about a dozen ways you can trace simply if you want to get from the National Gallery to the Traverse Theatre or the Usher Hall, and all of them have a special magic in certain seasons and lights. Just back from Berlin, where I was impressed as ever by the city's changing faces and its dynamism, I can't help but compare its lumpen architecture and the bleak nature of so much of its 1960s and '70s buildings - of which the same could be said of New York - with what surprised me as a new-found grace in Edinburgh. But at least spring was burgeoning in Berlin, too, and given that, as in London, nature is to be found right in the centre, that was one of several compensations of an exhilarating flying visit.
Posted by David at 09:54

You mention the five - or three - most beautifully situated cities in the world. But did you mean that? Vancouver has a magnificent situation but that is all. So maybe you mean the most beautiful cities, period? Yet Edinburgh is beautiful BECAUSE of its situation. Explain

Berlin is less heavy than it was before being vollige ausgebompt. Burke said that London would be the more awe-ful if in ruins, and as I sat in the Unter den Linden in 1960 I could see what he meant, with rubble all around me and the only noise being the cries of the birds and the occasional rumble of the underground trains

You're right - beautifully situated beautiful cities is what I meant (because Sydney, too, has a fabulous harbour setting, but I wouldn't put that up there either).

Terrible to rank, but yes, Venice first, Prague second, Edinburgh third (though second in my personal affections), Paris no. 1 as beautiful city but less so in terms of location, and I don't know if Siena counts as a city but I had that in mind. Probably others will come to mind as I consider. And inevitably there are some I haven't been to, though nothing I've seen on film or TV has suggested that they would displace the current list.

One could make a case for Istanbul, I think, certainly in the category of beautifully situated. And the various minareted mosques, including the great Hagia Sophia with its iconic saucer dome give the city a wonderful skyline.

In the U.S. there is also San Francisco -- interesting how many of these cities are situated on water of one kind or another.

Of course, Istanbul and San Fran clock in at 4 and 5 in my beautifully-situated-beautiful-genuine-city list. Paris and Siena then occupy special categories...

The curious thing about Edinburgh, though, is that it has no water running through the middle - Princes Street Gardens used to be an artificial loch, but you have to walk down to the beautiful Waters of Leith for a riverside experience, and further down to the Firth (which at least is visible from all high places in the city). On the other hand, it's unique in having an extinct-volcano national park in Arthur's Seat and Salisbury Crags.

Don't overlook Budapest, on this (can-of-worms subjective) list, or on your itinerary.

Lovely setting, Budapest, shame about the heavy Hapsburg architecture and the English yob contingent which drives around at weekend stag and hen parties yelling out of stretched limos.

Of course lists are bad and I don't pretend to be anything other than subjective. But it's always nice to hear other people's favourites.

Hmmm -- Is it the architecture that's heavy or was it the Hapsburgs? :-)

I built my house on the side of a volcano that's extinct, at least I hope . . .

What is it with the yobs and the need to desecrate? (Prague and Tallin also victims). Down here our lot target Bali and the cruise ships of the South Pacific, the latter some would claim more deserving, though not the hapless unsuspecting retirees. That lovely Grieg's Varen reminds me Bergen is pretty special in its own (lncl policemen in lycra on bicycles) kind of way.

'We' are the disgrace of eastern Europe, it seems, with our stag nights and our drunken binges.

Can't wait now to see Bergen for myself...

Sorry - I mistakenly sent off my comment above as "Anonymous". On Bergen, as I commented following the entry on Grieg,it always rains, and as a result the town has a beautiful green soft feel about it - but I would not think it ranks with the other cities we have mentioned

Siena always reminds me of the Renaissance princes, and I feel that, if I don't get stabbed in the back going through those narrow streets the drink at the end of my walk will probably be poisoned. It seems to me a bit sinister