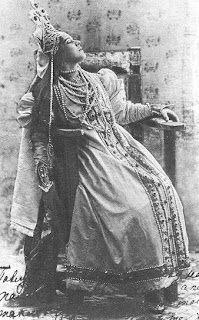 One thing's for sure: the dying heroine of Rimsky-Korsakov's pseudo-historical melodrama in Paul Curran's new production for the Royal Opera, opening tonight, won't be costumed anything like Nadezhda Zabela-Vrubel in the 1899 production at Mamontov's Private Opera. Dare I hazard a guess that the silent role - what the Greeks used to call the kophon prosopon - of Ivan the Terrible might be portrayed by a Putin lookalike in a sharp suit? There'd be a precedent for that in the purpled parody of Yeltsin's embarrassing disco-dance executed by Paata Burchuladze's Tsar Dodon in Zambello's Golden Cockerel. Anyway, it's going to be oligarchs and mafia, I imagine, in sets that will look nothing like the old Bilibin design for Act 4: 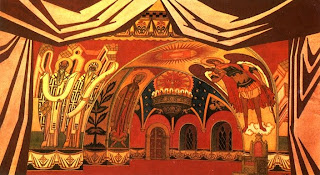 No, if that's the sort of thing you want, you can see it done at not quite the highest level in the valiant efforts of the Moscow-based ballet company calling itself Les Saisons Russes du XXI Siecle at the Coli, where on Tuesday our princess even ended up with the sort of wedding headdress envisaged on the frontispiece of my Tsar's Bride vocal score (I don't dare reproduce it again here, but I think they've included a shot in the programme alongside my article). I'm very curious to know whether Curran can make cogent contemporary drama out of a very silly revenge plot.

In the meantime, having seen a perfectly traditional production at the Bolshoy starring a veteran Obraztsova, I know it's not boring and that most of the music presses the right buttons, even while it's not Rimsky in fantastical vein. The overture's a nimble corker, for a start, and I've already waxed lyrical about Borodina and Hvorostovsky in the Act 1 duet. We ought to hear the classic Arkhipova performance of Lyubasha's lovelorn aria:

And here are two clips from the rather good 1966 Russian film, which I was pleased to be able to show the students in a Kultur DVD import. Note that the good-lookers, especially the dishy Gryaznoy, are actors miming to a Svetlanov-conducted soundtrack. First let's have the lovely quartet in Act Two, modelled on a very Beethovenian moment in Glinka's A Life for the Tsar:

And finally the scene of Marfa's poisoned delirium, using the medium of film to create the illusion inherent in the music.

15/4 The results: a bit of a disappointment, though the updating started out pretty well. Full Arts Desk review here - plus a belated glimpse of what we're talking about below, one of Bill Cooper's production shots of Act 4. 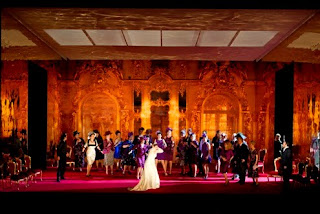 Saw the ROH production last night. I have to say, it's such a silly and really rather incoherent story that updating it to contemproary Russia did nothing for it. Apart from showing us contemporary Russia in some terrific sets, it was totally unclear to me in what way this particular story 'dramatised' anything to do with contemporary Russia, except in the thinnest possible way (ie modern Russia is cruel and hierarchic like old Russia). In addition, I felt they even seemed to give up the ghost of making this contemporary by setting the final scene in a sumptuous palace - I didn't understand that at all. Lovely music and in its way a beautiful production - I entirely enjoyed it - but not a coherent updating and an inherently flawed and, to my mind, rather silly opera.

Well, Andrew, I suppose the final scene is supposed to be the Tsar's domain, so it would be opulent, but I agree that it lost the 'look' of the show. And as I wrote in the Arts Desk piece, by that stage something supernatural needs to happen: if you watch the second film clip, it's lovely how the delirious Marfa starts walking on water. The realism just didn't hold out.