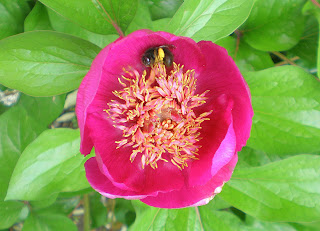 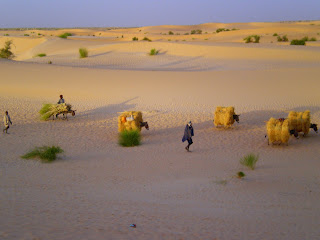 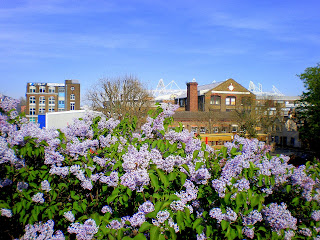 The Arabic word signifies the fifty days, on and off, during which the Khamsin desert wind is supposed to blow - usually commencing in April, so that's not freaky-weird in itself. We only had more or less seven, with Saharan sand particles, I'm told, flying around in the air, but that was enought to bring on the peonies in the Chelsea Physic Garden and the heady scent of lilacs in the wastelands around the East End's slowly-rising Olympic site. Between them you'll forgive me for interposing an image of where the Sahara starts just outside Timbuktu - a strong if not especially nostalgic holiday memory from Mali. Where we'll shortly be is a mere 54 days' camel ride from there.

When weather patterns change rapidly in the spring, the great flower race sees some unlikely contestants sprint forward. I know some peonies bloom quicker than others, but I don't ever remember these ones flourishing before May. Two visits to the Physic within three days saw them budding two Sundays ago 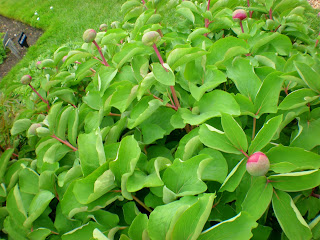 and bursting the following Thursday, while the ones near the beehives had already done their work. 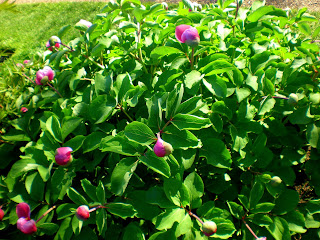 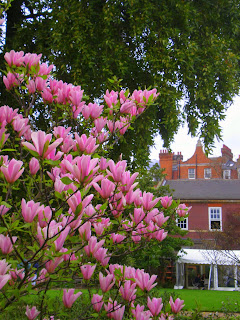 sent the robin on the tree by the gate twitter-berserk 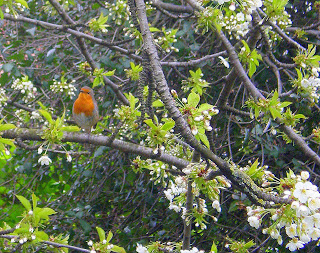 caused the phallic liquorice to rise 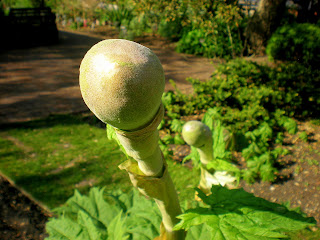 and brought on the Judas tree, another early flowerer. 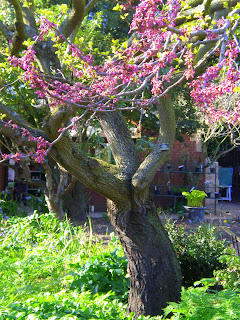 Lest you think we only do the posh and pretty parts of town, last Sunday's walk with friend Richard, who lives in the Three Mills enclave at the end of a long tube and bus journey, saw nature regenerating itself along the river Lea and the canal in a more urban environment. 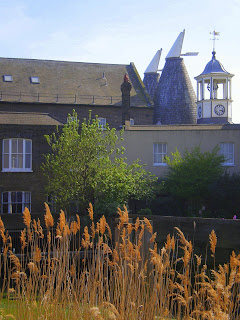 At the back of the old mill, which is just over the border from Tower Hamlets into Newham, a swan warily guarded her eggs. We didn't give much for her chances against the local fox community, but since I've heard tales of swans breaking the necks of dogs in Regent's Park, perhaps she'll be OK. 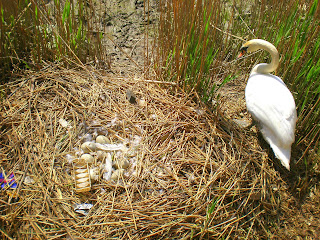 Nearby shone the dome of Abbey Mills Pumping Station, the 'cathedral of sewage' grandly designed by the great Bazalgette and Cooper as part of Bazalgette's lifesaving drainage system in the 1860s. 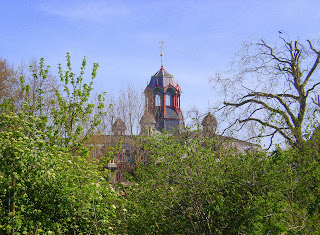 A shame that in WW2 it had to loose its two minarets, obvious targets for German planes. The full complement in this engraving makes the pumping station look positively Prince Regentish in its mixing of Islam with Byzantium. 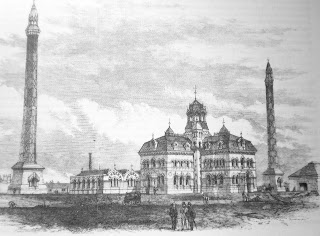 Richard's plan to lead us along the Green Way to Victoria Park was thwarted by the ever-changing Olympic village plans. But we did make our path through improvised rights of way stewarded by amiable Nepalese site workers 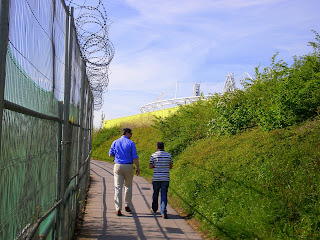 and found ourselves at a thriving improvised cafe looking over the stadium and the start of what sadly seems to be going ahead as the ugly, deeply unpopular demented-Eiffel-Tower designed by Anish Kapoor. As for horticultural life, it will no doubt bloom, but clearly - to judge from the sign and the result - not this year. 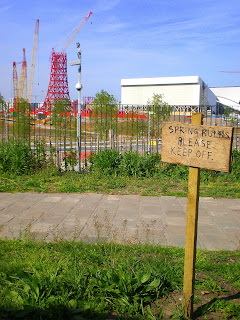 And so to Hackney, a friendly pub garden and a meander back to Mile End Station through enormous Victoria Park with another grand architectural folly, the Gothic drinking fountain designed in 1861 by Darbishire and presented by Angela Burdett-Coutts. Which, taking into account the dubbing of the sewage-plant, you could call the Armenian cathedral of free refreshment - not that you can get at it through the fencing that's around it at the moment. 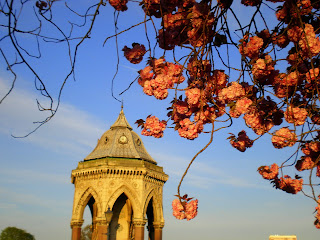 Everyone seemed to be having a jolly time, albeit with the smokes of a thousand barbecues and more litter than I've ever seen in a London park, the bins overflowing with the detritus of the year's first scorching Sunday. 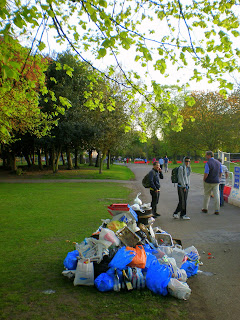 I love thinking of that little robin going "twitter-berserk." Thanks for taking us on your walk!

Twitter-berserk is something I've resisted going, Susan, despite all the pressure from my workplaces. I can see it's a useful tool, and just look how many people it brought rushing to the aid of the sweet gay boys who were thrown out of a Soho pub for kissing, but I've yet to see a really good tweet. And it's yet more time eaten in to, ditto Facebook...

You're wise to resist. Though I've obtained useful information, it can feel like shopping in a bargain basement, which I've always abhorred, or wandering into a Pinter play. Much better to take lovely walks, read the BBC Music magazine reviews by folks like David Nice and watch fine films like Creation (thank you for that!).

I think the swans are pretty hardy. I've often seen them on the river from the Princess (formerly Prince) of Wales pub on Lea Bridge Road.

Sadly the deer in Victoria Park are less secure. There are concerns for their welfare in a confined space and a new home is being sought.

The dereliction of the area of the Bow Backs rivers was great for wildlife, but the Olympic development has destroyed much of that habitat.

Another amazing former water board property is the Old Pumping Station in Stoke Newington, http://www.independent.co.uk/arts-entertainment/site-unseen-the-old-pumping-station-stoke-newington-1620117.html, now both a climbing centre and a superbly resonant performance venue, complete with old pumps and lakes.

Wonderful photos as ever David.

John Slepokura
I notice your reference to East London pumping stations. Have you seen Robert Billings' station for the Stoke Newington reservoirs, known locally as The Castle for its Gothic folly design, with a variety of conical and castellated features. Not far from Clissold Park it is well worth a visit. Its eccentric appearance I found uplifting even on a dull day, and God knows I saw enough of those when living in London. I think it might even be in full working order, after all this time.
Built in mid-Victorian times I should think.
John Slepokura

Great minds are clearly a-pumpin' alike - which means I must plan another east London ramble around the double recommendation. With apologies for delay in putting up your messages - I've been in Morocco for the last ten days, as you may have intimated from the above.

And Mr John formerly of Stoke Newington, how good to hear from you if in such a formal, roundabout way. Do call and let me know how things are going - I fear I've lost your number.