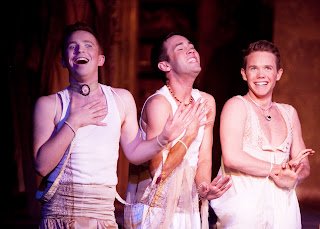 I don't usually double up on an Arts Desk rave, but here's a show in which I wish I had shares: Sasha Regan's all-male Iolanthe, newly transferred from the tiny Union Theatre to the evocative space of the wonderful Wilton's Music Hall. And on it will no doubt go to the West End and Broadway, and if it doesn't, it should. Any excuse to put up a few more photos by Kay Young: of the fairies above, who of course have their fair share of camp, but do so much more besides, and of Alex Weatherhill who brings counter-tenorial beauty to the Fairy Queen's most melting number. 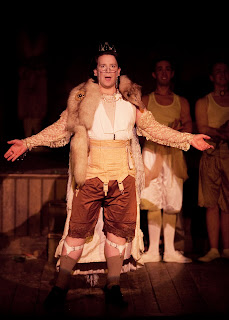 It's worth remembering, since Gilbert especially is taken to task for cruelty to old bags like Katisha and Lady Jane, that these ladies also get the most soulful numbers in the shows. The Queen's liquid melody has witty lyrics to match: 'amorous dove, type of Ovidius Naso' is invoked in verse 1, and verse 2 eulogises the then chief of the London Brigade:

Oh, Captain Shaw!
Type of true love kept under!
Could thy Brigade
With cold cascade
Quench my great love, I wonder!

There are so many pleasures in lyrics and dialogue, some of which I confess I was anticipating more keenly then they were occasionally delivered. We all love lofty Lord Tolloller's plea to not-so-simple shepherdess Phyllis to 'spurn not the nobly born':

Hearts just as pure and fair
May beat in Belgrave Square
As in the lowly air
Of Seven Dials! 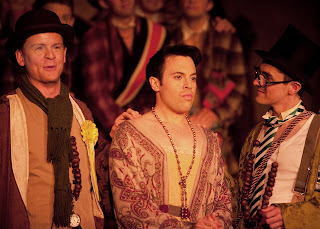 There's also such musical distinction in the music of Iolanthe's resurrection, and her Act 2 crisis - all the more so when you listen to Sullivan's limpid orchestration, as I have done again this morning on the Sargent recording (such a shame that Telarc pulled the plugs on Mackerras's series before he could get round to Iolanthe, which he specially adored). Yet Christopher Mundy's lone piano-playing was masterly.

As I've already intimated in the review, what I loved best of all about this magical evening is that G&S come out of it triumphantly vindicated as the best of tune- and word-smiths. Ideas flash up so thick and fast in the Act One finale, and - rare in most of today's musicals - the ingenuity continues all the way through Act Two. Plus here it all was getting new life through a young, pretty and buffed crew, a class-mix Gilbert would have relished of show kids and kosher opera singers, dancing boys from Essex and others exuding public-school confidence like the beauteous Strephon of Louis Maskell. 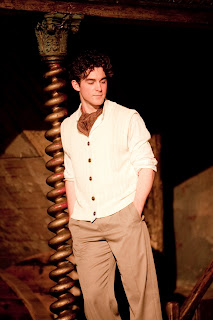 Now I'm waiting for our overseas friends to come and stay so we can have the excuse of taking a Monday tour around Wilton's Music Hall, which just gets better; I remember the peculiar atmosphere of the peeling auditorium from Fiona Shaw's reading of The Waste Land, but I don't recall the foyer rooms being so welcoming. 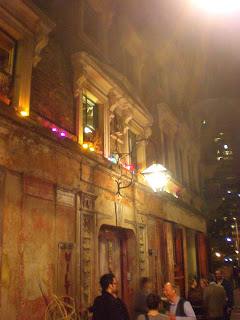 Do go and see Iolanthe there - book now before it's too late; I don't doubt the show will find an even bigger home, but none could be more susceptible to true fairy magic than this one.
Posted by David at 11:27

re your comments about the West Wing, the Wire(which is excellent)et al, have you tried the French police series The Spiral, available on BBC DVDs? Brilliantly scripted, fast-paced and exciting without ever being shallow or showy, and with interesting angles on the French judical system and how it differs from Anglo-American, I found Spiral riveting
Philip Garton Jones

Wilton's is a lot prettier front of house than it is in the dressing rooms, I can tell you... I was in a show there way back in 2002, a very interesting Naomi Wallace play about Capability Brown.

No, Philip, I haven't - next on the list once five remaining series of TWW are out of the way. I do feel I ought to squeeze The Sopranos in too...my serial education is so incomplete.

Jon, do you think the dressing rooms have improved? Everything else has since I last went. Friends at university put on a production of 'Engaged', but still of course one longs for the speech-melodies.

By the way, why do you think the Brits cannot achieve series of the power and impact of the West Wing? I know these series cost vast amounts of cash, but it cannot simply be a question of money?
Philip Garton Jones

Well, we do dry wit pretty well - West Wing of course reminds me of Green Wing, whose creators seem to have come such a cropper with something called Campus. Other American series, like Six Feet Under, seem to me to become formulaic so quickly. Not - and I'm only towards the end of Series Two - West Wing.

Our way with classic serials, though, shouldn't be dismissed as pure nostalgic chocolate-boxery. I've enjoyed Cranford and the recent Dickens serialisations, above all the last Bleak House and Little Dorrit: as good as anything in the cinema, and of course able to accommodate so much more detail at leisure.