All aboard the Edinburgh FrOSchbus 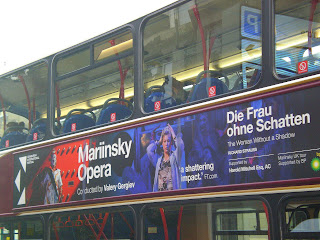 Strauss's amused acronym for his most ambitious opera, Die Frau ohne Schatten throws up rather inappropriate connotations: this is no ribbiting, clammy little bugger (frosch/frog, in case you wonder what the hell I'm on about) but a dapple dawn-drawn falcon that over-reaches at times. But many of us find it fascinating, and jump at the chance to see it. Which, in Blighty, hasn't been for a decade (the last, underpowered revival of the Hockney-designed production at Covent Garden), though it seems to be doing the rounds on the continent.

Gergiev's Mariinsky adventure, in a fitfully engaging production by Jonathan Kent with some fabulous designs by Paul Brown (including the dyer's garage, pictured below in one of the company's production shots), wasn't heading to London. So seeing it at the tail-end of the Edinburgh Festival provided a good pretext for a Scots sandwich, visiting friends in Abernethy and Broughton-by-Biggar either side (the two days before that were scotched when I developed food poisoning, possibly from Hungarian mushrooms, before we were due to leave and chucked up at least once an hour from 8am to midnight, awful). 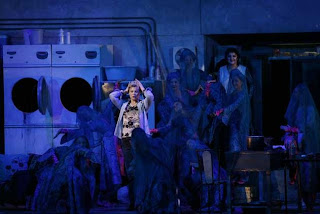 And, yes, it was worth it in parts, as you can see from my Arts Desk review. Whatever the diminishing returns of the finale - as much Strauss's fault as any production's - for quite a while after the performance, your head is full of FrOSch if it makes the kind of impact it did here.

It was only on the morning after that I made a personal connection. J and I marked our 23rd anniversary last Friday in the city where it all began. We'd come to the Edinburgh fringe to sing in David Edwards's City Lit production of Gianni Schicchi, Sicilian mafia style, and I also had my first work for Radio 3, at the enterprising Tony Cheevers's suggestion - to prepare a 12 minute slot on CD Review (was it still Record Review then? I think it was). The subject? The first ever complete recording of Die Frau ohne Schatten conducted by Sawallisch - and this is still the most orchestrally well-paced of the lot - with a variable cast. 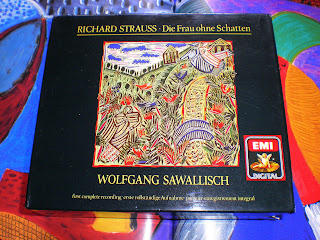 Here sits the set on my Royal Opera programme for 2001. I thought of adding the WNO programme from the first time I saw the opera, back in 1981 with Norman Bailey supreme as Barak (still got the cassette of Act One), but I could only find the translation-book.

Anyway, I remember sitting up through the night working on the script, after which we went off to breakfast in the Caledonian, lunch (if I remember right) with Terri Robson and James Jolly in Ferri's and evening at the Playhouse being knocked for six by the UK premiere of Nixon in China.

Ah, such days! But these weren't bad either, even if Edinburgh 'twixt end of fringe and start of university term seemed drab and ailing without much evidence of The Young (I felt, or imagined, as much of a credit-crunch downturn here as I had earlier in the summer in once-lovely Lyon). We heard a second stunning song recital this year to follow Toby Spence's Cheltenham blockbuster, Diana Damrau's Queen's Hall nocturne-in-the-morning with harpist Xavier de Maistre (Gerhaher's Wigmore Schubert I expect to be the third, fourth and fifth). And though we never did go in to the big Elizabeth Blackadder exhibition as we'd intended, the artwork that the city itself has temporarily (and in some cases permanently) become, thanks to the Edinburgh Art Festival, laid itself out for our pleasure. There were Indian and Javanese textiles at the Dovecot, a weaving enterprise of which I'm fond even though I preferred the building as the Infirmary Baths (and swam there) 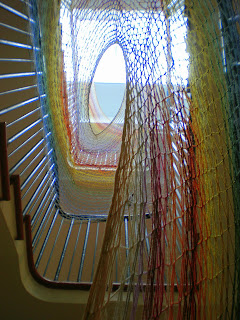 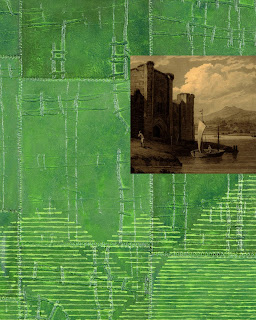 and the fabulous work done by Turner prizewinner Martin Creed on the once-unlovely steps connecting Waverley Station and the Scotsman offices. 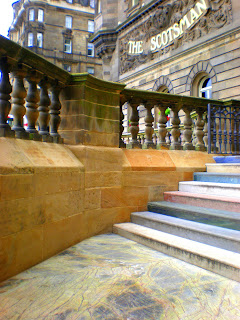 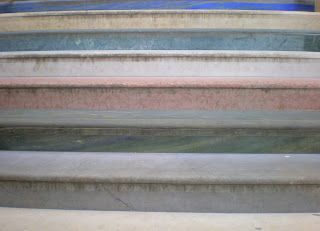 This is an adornment Edinburgh should be able to enjoy for ever - but not between midnight and 5am; it's a public gesture, but they don't want too much pissing or any sleeping on the way up or down.
Posted by David at 10:23

Do you think that at the highest level men having stronger hands can achieve more than women on the harp? I thought that possible when I heard him many years ago ( on the suggestion of Jean-Guy, a cousin)and I wonder if you have reflected on the matter

Not on the evidence of what Sioned Williams of the BBC Symphony can achieve, no. And though le Maistre did pull some bigger sounds out of the bag in the second-half Faure, there was too much wispiness in the rep for my taste. Britten gets some stunning resonances out of the harp, of course.

Well, I’m breathless, with your FrOSchbus journey and following the links—and here I thought you were still in Iceland! Do believe I heard Deborah Voigt at the Met in Die Frau several years ago, but, pathetic to admit, I can’t seem to call it up from memory. Speaking of memories, lovely back story—congrats on 23 years (we're coming up on 32, we think, though we seem to have increasing trouble counting up). I found Nick Sargent’s “A Scottish Landscape” a most appealing work, which must have been wonderful to see “in person,” with all that texture you just can’t duplicate in a photograph. (PS: laughed out loud at your graveyard comment—I, too, look on this sort of thing with a wary eye & in fact was on a different mission—a photo for a post on another topic, then veered off to this one.)

Nick will be delighted to hear that - I'll pass on your kind words.

Funny thing - I couldn't remember who sang the Empress the last time I saw FrOSch at Covent Garden, and it turned out to be Voigt. And even when I saw that I couldn't recall how her performance had been...Mind you, she's damned good in the DVD of the 2003 (I think it was) Met Ariadne.