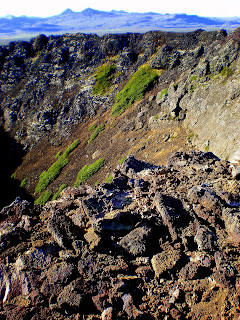 Strictly speaking, it's a caldera rather than a volcanic crater, a seismological feature caused by collapse of land for the naming of which we have to thank an early 19th century German in Tenerife. This, of course, is back to Iceland, and a not too difficult ascent off the main coastal road before it heads up and west to Snæfellsnes. We did it all in a couple of late afternoon hours after the eventful morning 'naturewatch' around the islets of Breiðafjörður. I thought we could take the longer scenic route from Stykkishólmur, but the unsurfaced road got rougher so after a quick look at bird-filled Attafjörður 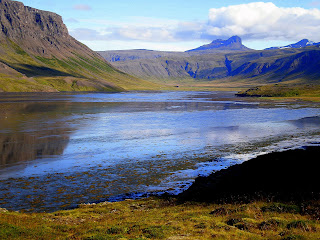 we cut our losses (nil, really, given the beauty of that fjord) and retraced our tyretracks along the familiar Route 56, with the view down over the Berserkjahraun we'd seen in so many different lights. 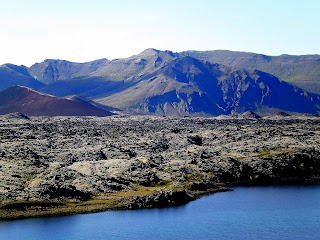 Near Eldborg you park at a youth hostel and a ranch, where those beautiful, long-maned creatures the hestar or Icelandic horses were to be seen in abundance. 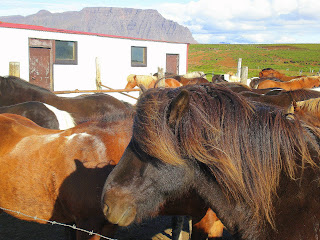 Here the Kalda and its tributaries flow down from the Fagraskógarfjall range, seen here in the fast-shadowing light of our return 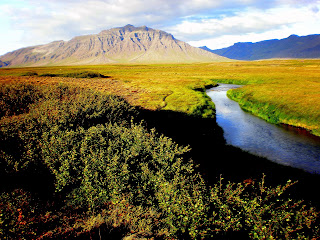 and the Eldborgarhraun, the lava field in which our caldera sits, spreads out with its fragrant shrubs towards the sea. 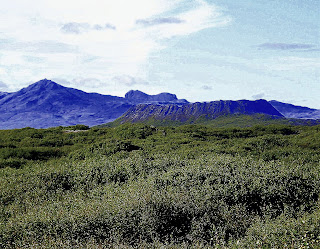 In patches between the green, the usual sculptural lavaforms can be seen. 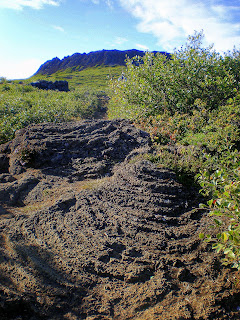 What isn't apparent when you set off on the path is how Eldborg (literally 'city of fire') isn't the only caldera in the field; another can be seen as you climb its sides 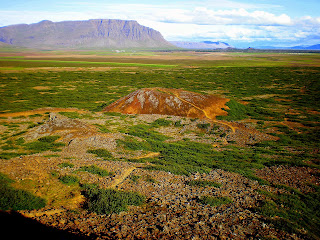 and may be walked around as a detour on the descent. 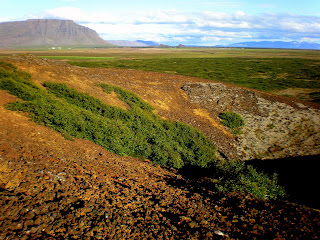 But the splendour is, of course, on the rim of the big caldera, reached by grabbing on to the chain that accompanies the walkway. From here you look north to the Ljófusjöll range 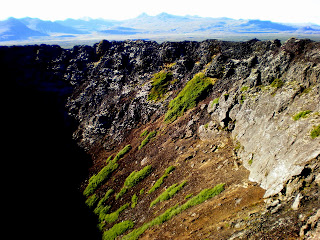 and west to our oddly beloved Snæfellsjökull, still clear in the early evening light 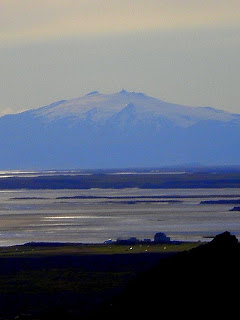 as well as inland to the east. 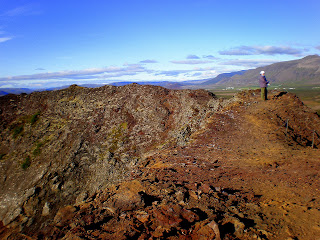 And so at a leisurely gait back to the starting point 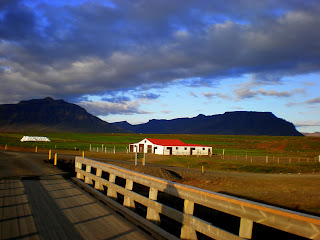 with the further advantage of those long Icelandic days to reach Stykkishólmur in time for a 10pm sunset and supper.
Posted by David at 15:36

You are still there, then? Lucky fella. I say again, I simply had no idea what Iceland held in store. Thank you for taking us along, at least indirectly!

Nope, just back from Scotland with so much catching up to do but can't leave Iceland alone and ain't finished yet... I see you don't do too badly with all that Big Nature on your doorstep.