Why you must see The Passenger 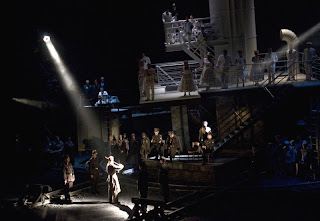 It's an Auschwitz opera, but it could hardly be more responsible or unsensational in its approach. Zofia Posmysz, the Polish woman on whose novella it's based, was indeed interned in the camp and years later heard what she thought was the voice of her former tormentor in a group of German tourists on the Place de la Concorde (it wasn't, but she based her flashback technique on a 'what if?'). Mieczyslaw Weinberg, the composer, otherwise known as Moisey Vainberg, followed in his father's footsteps as a musician in Warsaw's Yiddish theatre, fled to the Soviet Union while his parents and sister were sent to the camps, and was imprisoned in the last year of Stalin's reign for 'bourgeois Jewish nationalism' (his father-in-law had been Solomon Mikhoels, whose fate he was spared only by Stalin's death).

So both had a right to such an opera. That wouldn't in itself make The Passenger great, and in the relatively cold light of twice viewing the Bregenz premiere on DVD - the first time to review for the BBC Music Magazine, the second time with a score to write a programme note - I still can't say with certainty that it is, at least by the conventional canons of operatic masterpiece status. Too much, perhaps, lives under the shadow of Weinberg's inspirational father-figure mentor Shostakovich (I argue in the programme, or rather speculate, since there's so little hard evidence, on the presence of a third voice who would certainly have been presented on a regular basis to Weinberg by Shostakovich, Benjamin Britten). 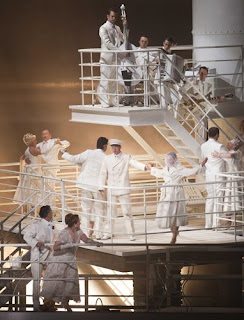 Yet what struck me especially on a second hearing was how restrained much of the musical invention is. It doesn't thrust itself on you with any false pathos; it only really breaks its leash in the impassioned love music between the imprisoned Sofia-figure, Marta, and the lover she's reunited with, Tadeusz. It places its dissonant climaxes very carefully; it makes use of a life-and-death tension between cheap music and Bach (a departure from the source). Its dramaturgical arches see the banality of evil ultimately wiped clean, or at least dwarfed into insignificance, by the voice that will never forget. 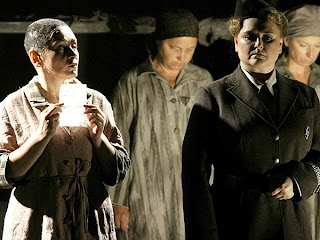 Above all it demands total integrity from its cast. Michelle Breedt, picture above right in the third of the Karl Forster photos from the Bregenz premiere, will surely be as magnificent at ENO - the eight-performance run starts tonight - as she was at Bregenz. Giselle Allen sings the other woman, originally sung by Elena Kelessidi (on the left). There are superb roles for a whole ensemble of women, whose barracks scenes remind me of the integrated acting in Sovremennik's vintage staging of Yevgenia Ginzburg's Into the Whirlwind. And David Pountney, knowing better than to exploit his recent trademark crazy crowd scenes, directs with restraint on Johan Engels's perfect set.

I'm facing tonight's UK premiere with just a little knot inside, but I know it's going to be quality work. I'm sure, too, that the opera itself will justify the five two-hour classes we're going to spend on it in my Opera in Focus course at the City Lit, starting this afternoon. Lucky that I have a full house of students willing to follow me into such arcane repertoire... 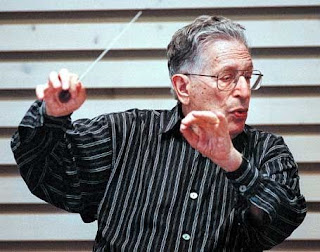 On a connected note, I spoke on the phone yesterday to Thomas Sanderling about the death, just before his 99th birthday which would have been today, of his remarkable conductor father Kurt. I needed to check some facts in my Guardian obituary, and though I gave him the option of not being disturbed, he rang me to talk about his father's last days and to read through the piece (which made me very, very nervous - needlessly, as it turned out).

Both Sanderlings have been intimately connected with Weinberg's work; the composer dedicated his Second Symphony to Sanderling Vater. Now Thomas is embarking on what he feels passionately sure IS an operatic masterpiece, Weinberg's treatment - with the same librettist, Alexander Medvedev - of Dostoyevsky's The Idiot. He's going to play through scenes from the piano score to convince me. So the wonderful continuity of the musical world goes on...

Stop press, 20/9: The Passenger was, as predicted, done by ENO at the very highest level. Fret though I may about what might be the authentic voice of Weinberg, there were huge strengths throughout and, yes, the epilogue was quietly affecting. Review here on The Arts Desk. And I got to shake the venerable hand of elegant Zofia Posmysz...
Posted by David at 08:06

I was hoping you might write about this. As for following you into "arcane repertoire," I suspect that would be fun, and certainly enlightening--the only issue, were I one of those students, would be whether I could keep up! I went over to Spotify to see what of Weinberg's might be available, and there is some (though I didn't see The Passenger). Any recommendations from those holdings you'd suggest?

Spotify, as often, rather overwhelmed me in its random layout of choices. What I'd go straight for, in its searing simplicity, is something that doesn't seem to be there: the Rhapsody for cello and orchestra, composed in the impossible last Stalin years, on a Chandos disc of concertos. That really shows Weinberg's gift for melody, which is kept at a premium for obvious reasons in The Passenger.

Thank you for this. I will definitely seek it out.

This is one great production and everyone needs to see it. I think this is going to be a hit.