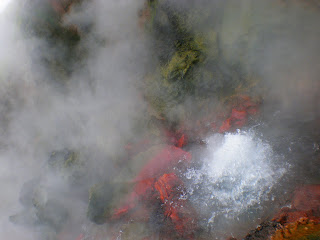 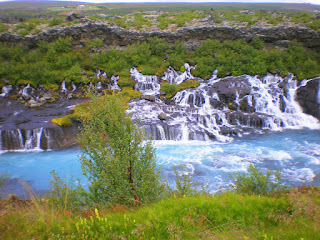 Plenty of both in Iceland - heck, they even have hypocaustically heated pavements - and the heating bill costs are low, if nothing else is. Well, I've seen a Big Geyser and a bubbling lake (affectionately known as Frying-Pan) in New Zealand's Waimangu national park, but I was still fascinated and a little scared by the hot springs at Deildartunguhver, while Hraunfossar waterfalls offered something new, water emerging into turquoise pools from under the Hallmundarhraun lavafield.

Should have given you a bit of a glossary before, by the way, since all place names in Iceland are logical: 'hraun' means lava - there's even a toffee-crisp style chocolate bar so called - while 'hver' is a hot spring, 'foss' a waterfall and - as you may have gathered many entries back - the inescapable 'jökull' means 'glacier' (I was surprised to find it's a boy's name, too). 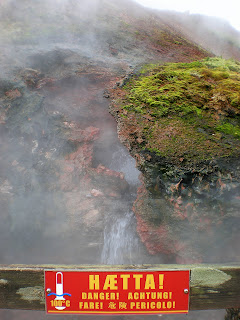 Deildartunguhver's statistics are unvarying but spectacular: water pouring forth close to 100°C (97, to be precise) at 180 litres a second, which easily tops comparable springs in the southern States. The modest fencing won't protect you against sudden scalding spurts, so you have to keep a further few feet back. I think we need some sound and movement on this, though I can't convey the sulphurous smell and the heat.

Deildartunguhver (there, now I've broken it into syllables and made sense of it I really like typing the name) is also the only place in Iceland, we're told on the information boards, where the deer or hard fern, Blechnum spicant, is to be found. This isn't it, but the shades of green are impressive, surely, and a bit of a relief to the adjoining slime. 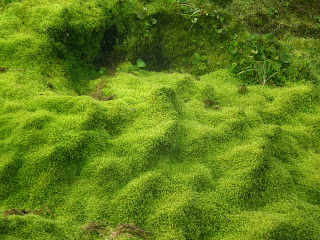 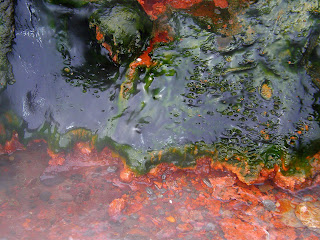 Tomatoes grow in the nearby naturally-heated greenhouses - we saw some for sale when we drove up to invade the natural scene - and pipes carry the water to heat Borgarnes and Akranes, travelling a total distance of 64km (they follow you along the otherwise more picturesque road back to town). 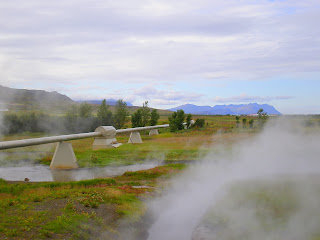 Unforgivably, if you happen to be a fan of Snorri Sturluson and his epics, we had to keep an eye on the clock and bypass the unprepossessing looking settlement of Reykholt, where the chieftain-bard lived and, in the end, was hacked to death. Our hostess at the Harpa Concert Hall, vivacious Steinunn, impressed upon us that our omission might have been a bit of a shame. She used to run the music festival here, and told us the acoustics inside the church are excellent. She also told me a funny story connected to the Norwegians' co-operation in the festival (for they, too, claim Snorri as their own). A local farmer bears a remarkable resemblance to the King of Norway, who happened to be visiting. Participants were asked to bow to the King, which of course the republican Icelanders are not at all used to doing. Steinunn, who was accompanying the soloist, came on with her - and their heads collided as they bowed in different directions, Steinunn to the king and the soloist to the lookalike farmer... 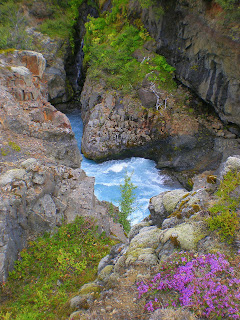 Be that as it may, we were pushed for time, all because of the need to be in Reykjavik by 3pm (which turned out quite unnecessary, but that's another story). So onward we went into more remote, open country, following the course of the river Hvítá up towards the glaciers from which it comes. And there's Hraunfossar, certainly one of the natural wonders of the world, albeit a small-scale one. 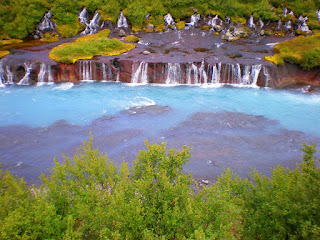 Upstream is the more violently rushing Barnafoss where legend tells of two children who drowned crossing a natural stone bridge (apparently not this one, but what the point of the story is, with the mother cursing it, I'm not sure). 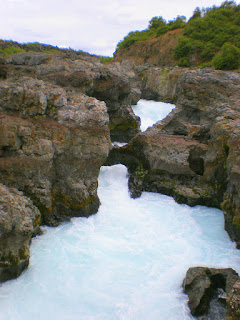 And so the Hvítá joins it all together, as you can see by following its course along the lavafield down to the west 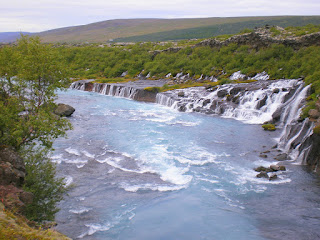 and up towards the great glaciers and the enthralling inland of Iceland. 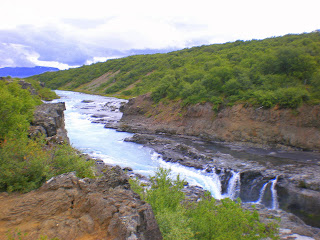 Which we would have seen, going on to Húsafell and the rougher roads, had there been time enough. Will simply have to make it on an essential return trip. On this occasion, however, the schedule of the human world called, so off we went to the genial civilization of Reykjavik. 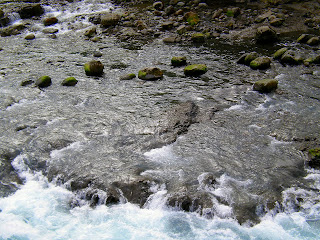 What a remarkable country. Who knew (as I've probably said before)? Your photographs and commentary (including the parsing of those odd words that turn out to be so logical) are wonderful, and the video is an enormous treat. (I almost felt I should step back from my laptop a bit.)

I can certainly see why a return trip is a must.

Had to post this portion of a wonderful e-mail from Icelandophile No. 1 Hilary Finch, whose advice was so invaluable in thrashing out the itinerary. Not to blow my trumpet - shucks, there's more - but to give a wider readership to her flavoursome central memory, with her gracious permission:

'I shall treasure your pictures -- what wonderful LIGHT you had! It's rare to see all those colours on one visit. I remember the very first time I glimpsed that neon-green moss/fern..............I never had the bonus of a car (not until recent years, when my friend Einar and I drive around together if/when he has time).........At first I just used the buses. But one of my first trips was across the island from south-west to north-east, as it were -- along the old central highland dirt road of Sprengisandur, with Myvatn as my destination (a must for you some time; but that route can be driven only about six weeks of the year).

'The bus drove through miles and miles and miles of desert -- from indigo blue to all shades of brown and ochre and grey. Then, after hours, suddenly, suddenly a flash of that intense GREEN, as a gulley provided moisture for its growth. Also in June there's Arctic River Beauty -- whose botanical name just escapes me, and I'm too lazy to go downstairs and look it up in my Icelandic Flora -- a heliotrope pink-mauve flower which also pops up wherever there is a drop of water in the desert.

'All this is to whet your appetite for your second visit!'