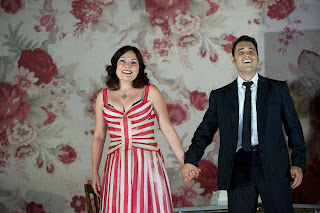 Could you think of a better use for Buoso Donati's money than the rosy future of these two incandescent young things - Ekaterina Siurina's Lauretta and Francesco Demuro's Rinuccio as pictured by Bill Cooper for the Royal Opera - in one of my desert island operas, Puccini's Gianni Schicchi? Wouldn't you put them on top of a wedding cake and eat them? And, yes, they sang as spiritedly as they acted.

If we've learnt one new thing about Schicchi in the past few years, it's that the comic payoff is so much richer if it comes after the Seineside hell of Il tabarro and the foolproof pathos of Suor Angelica, a true trittico indeed. And on Monday night Richard Jones, the only visionary director of our times (I've said it before and I'll say it again), pulled off the feat of connecting the three operas in far from obvious ways, using three of our best set designers, no less. Perhaps I was over-subtle in what I detected they had in common, since these things - the bedclothes, the shadows and - in Tabarro and Schicchi - the impersonation of a dead figure wrapped in a sheet/cloak by the same singer (Lucio Gallo) - weren't picked up by others. Read all about it on The Arts Desk. 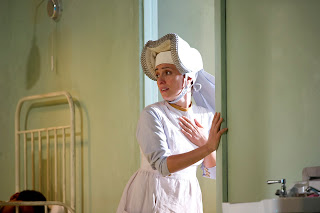 Some bloke accused me of lacking objectivity in saying that I might have warmed to Ermonela Jaho's pharmaceutical nun if I'd been able to see her face better - and, yes, doesn't she look lovely in the above photo? But I thought it WAS objective to announce where I'd been sat (in the balcony, seemingly demoted by RO press after swanning in the stalls). And what you can or can't see does make a difference. In any case, the problem with Jaho is the tight, vibrato-y voice which just won't open up for the crucial 'Senza mamma'. Here's the greatest performance of it I've ever heard, Callas included: Scotto's on the Maazel recording.

People who said they usually squirm at Suor Angelica - I never have in the opera house, always wept buckets - found they warmed to the Royal Opera take, Jaho included, but that was Pappano, Jones and Puccini all doing their stuff, surely. The kid business as radically rethought here was, I reckon, more rather than less moving than usual. 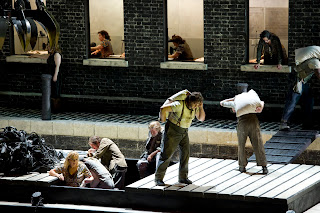 Love the Mimi-seamstresses at work on the quay in Il tabarro. One, I noticed from the cast list, was Jones regular Michelle Wade of Maison Bertaux fame (how's it doing? Our Bertaux phase seems to have passed - it just got too ludicrously expensive). And the set design put Ultz absolutely on a par with current (well-deserved) darling Miriam Buether's kiddies' hospital and John Macfarlane's floral-wallpapered Florentine apartment. Love, too, those dayglo costumes by Nicky Gillibrand (one constant throughout). 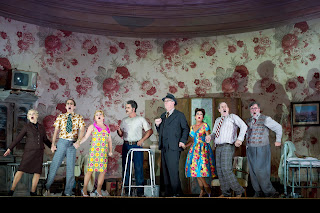 It would take a really bad Schicchi for me not to chuckle indulgently at every jot and tittle; this one, staging-wise, was as taut and perceptive as it gets. As I've written before, we put it on at City Lit 23 years ago; David Edwards, who graduated to bigger things at the Royal Opera and elsewhere, gave it a Sicilian-mafia look with lots of scrumpled pieces of newspaper as decor. I was Marco, a relative who can't really stand out (Robert Poulton at the Garden didn't; though Alan Oke's Gherardo, thanks to nightmare-retro costuming, certainly did) but has as much fun as anyone being on stage nearly the whole time.

The fabulous Vasiliki Fikaris, dear Vassa (where is she now?), was la mia moglie. The diplo-mate, subsequently the best of Escamillos at City Lit before moving up the register to be the greatest Florestan at St John's Smith Square (I kid you not, but then you could say I'm partial), sang Maestro Spinelloccio. Our relationship began in the enchanted air of a summery Edinburgh - my city - when we took it to the fringe with the Rehearsal Orchesta.

So it's 'our opera', and I've loved it irrationally ever since, though I'm still convinced that Puccini's comic timing is extraordinary - if anything even better than Verdi's in Falstaff - and as Pappano proved, the score never stops yielding up more secrets (that bassoon for the bowel movement!). Though Bryn was his usual charismatic self as Schicchi when the Jones production first appeared, il maestro has to be Alessandro Corbelli, who plays the cunning peasant as an extra member of the Marx Brothers (watch for gookies).

Corbelli was good in a messy Met production, but incomparably better for Annabel Arden at Glyndebourne, Jurowski conducting. Watch this segment - sorry about the Japanese subtitles - for Rinuccio (Massimo Giordano) setting up his entrance and Lauretta (Sally Matthews) persuading him to stay and sort it. Jones treated 'O mio babbino caro' rather seriously: maybe Lauretta really will throw herself in the Arno if she can't marry her Rino, clearly Gallo's Schicchi cares for her more than life itself. In the Glyndebourne Schicchi, she's the sweetest of manipulators. Battleaxe cousin Zita is, of course, Felicity Palmer, playing her rather elegant, though Elena Zilio at Covent Garden is my favourite (her solo 'lllllladrrrrrrro' to Schicchi once the lawyer's gone brings the house down). Enjoy - and don't forget to listen to the Radio 3 broadcast of the Royal Opera production on Saturday.

To answer your question, I wasn't disappointed by Jaho. I too saw the show on Monday night. I know what you mean about the vibrato, but it had a youthful quality to it which I found rather engaging. And it was a very different sound to the Giorgetta or Lauretta.

But that aside, I agree with you entirely; I thought it was one of the finest things I've ever seen at Covent Garden.

Agree wholeheartedly that where you sit does affect what you see. It happens in 'straight' theatre as well, and also affects what you hear. It's not the first time the critic (in the posh seats) has ooh'd and aah'd about a production and how subtle and effective the soundtrack was. Meanwhile, I was sitting right behind a speaker, and the volume was such that I was getting a headache. Similarly in old-fashioned theatres - Perth is one - when the director extends the stage into the first couple of rows of the stalls. If any action takes place there, it's lost to most of those sitting in the circle. Directors should sit in all parts of the theatre, to get the overall effect.

Agreed, Catriona: both conductor AND director should check from all parts of the house. Solti always did, learned it I think from Strauss.

Talking of which, the Royal Opera Arabella was the most infamous example of staging that didn't work, say, in the amphi, where Mattila sang ALL her big set pieces from the top of a staircase, unseen by us. Ditto, apparently, the recent Loy production of Tristan, though I didn't get to that, for various reasons.

I wonder what it'll look like from row ZZZ of the amphitheatre? I'm seeing it in a couple of weeks and can't wait- I've been sort of obsessed with Angelica since buying the wonderful Amarilli Nizza DVD at Christmas.

Jaho always sounds a little sheeplike to me, so I hope to be pleasantly surprised; I've been spoiled by Soviero on YouTube (and Popp on CD, somehow managing to be heartbreaking despite having entirely the wrong voice).

Sheeplike's the word, Jon - she's not bad, but she's no Harteros (now that, I think, would have been out of this world). I was much more wrung out by Cheryl Barker (twice, at the Coli) and Barbara Frittoli at the Met, not normally a singer who involves me - but she looked completely wrecked at the end of it. And, ah, Lucia, she'd move a stone to tears in anything. Never heard that one.

Anyway, you'll still be moved, and the production is unique...