Art Nouveau: a street in Riga 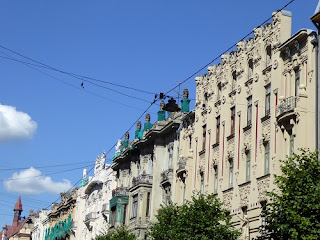 Alberta iela, where tourist groups are brought to see the most extensive row of Art Nouveau blocks in Latvia's capital, also happens to be where my friend Kristaps' small but classy publishing house, Mansards, has its office. 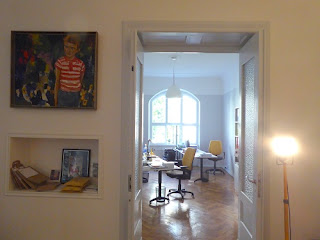 In, it has to be said, the weirdest and most forbidding, castle-like building on the street, No. 11, 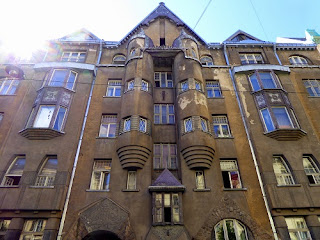 the 1908 work of Eižens Laube which also has the advantage for students and renters of not having been done up yet. 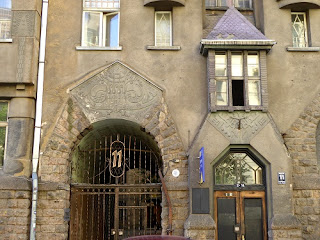 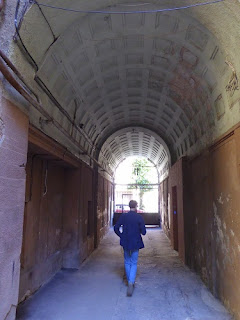 leads to a courtyard which would be very Crime and Punishment were it not for the lovely big tree in it. The old designs on the staircase to Kristaps' office have been nicely revealed, too. 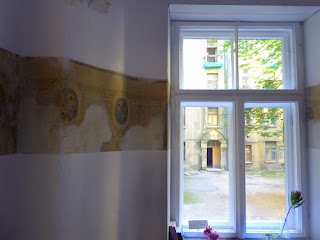 And he gets to look out on such gems as this, No. 8, designed in 1903 by the predominant genius of the Art Nouveau movement in Riga, Mikhail Eisenstein (1867-1921), father of film-maker Sergey. 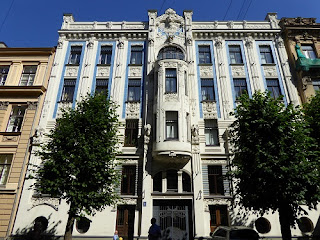 No. 4 (1904) is where young Sergey lived for a few years, my guidebook says, though I didn't see a plaque. Perhaps I was distracted by the lions on the turrets. 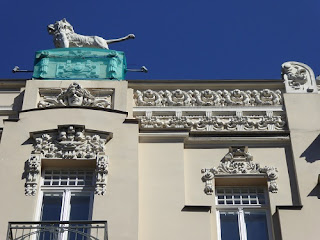 Fascinating details abound on both: at like the satyrs with pan-pipes here, 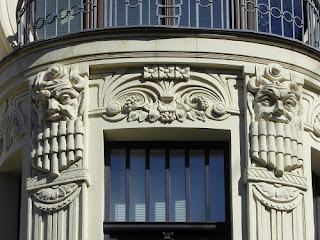 a more central lion atop No. 8 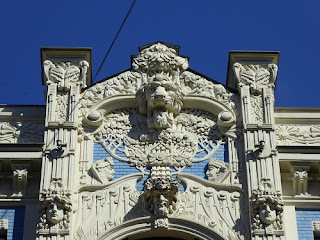 and the Babylonian dragons here. 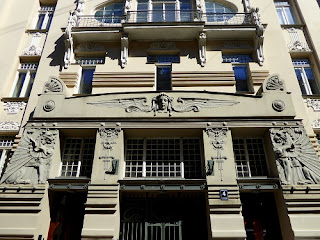 My own personal favourite, partly because of the handsome dark red stripes, is No. 2a, another Eisenstein folly from 1906. 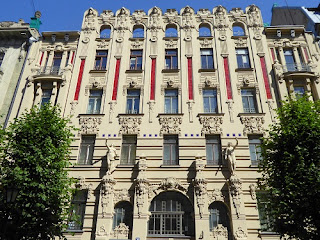 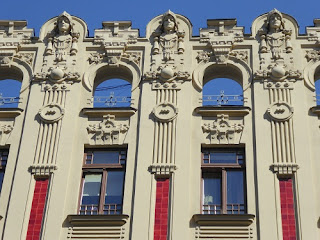 and a combination of grotesquerie and elegance lower down. 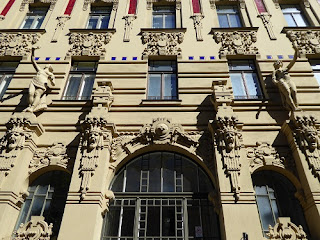 It's especially endearing because the young Isaiah Berlin spent some of his formative years here - this time there IS a plaque. 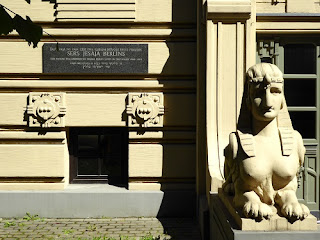 Turn left at the end of the street, and you find an especially spruce restoration, of No. 41 Strēlnieku iela, a typically riotous Eisensteinian fancy of 1905-6 which now houses the Stockholm School of Economics 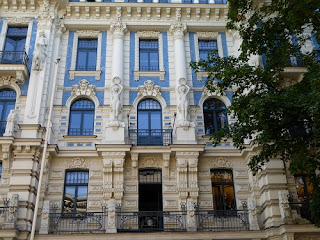 with classical/futuristic helmets at the base 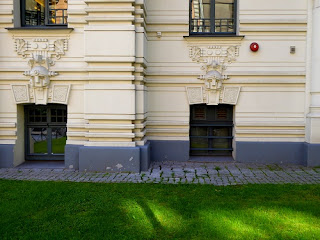 There's a statue outside, one of many dedicated to the city's much-loved fourth Mayor, Riga-born Englishman George Armitstead. 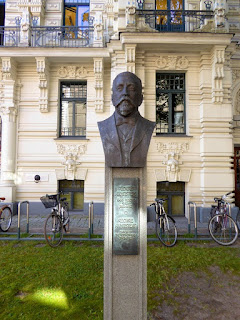 Most startling of all are Eisenstein's elongated heads on the corners of the pinnacle at No. 10b Elizabetes iela, 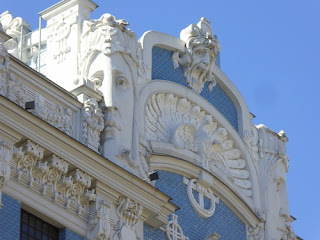 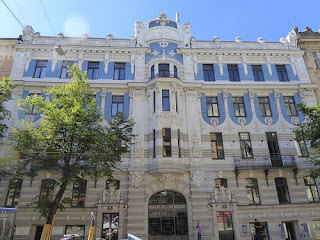 The Art Nouveau district has most of them, but there are a few in the Old Town, one topped by this wolf, 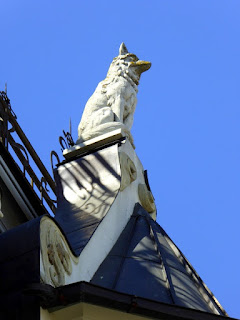 though here as you'd expect what turns out to be the oldest inhabited house in Riga makes a tourist attraction with the two buildings to its left, known as the Three Brothers in counterpoint with Tallinn's more regular Three Sisters. 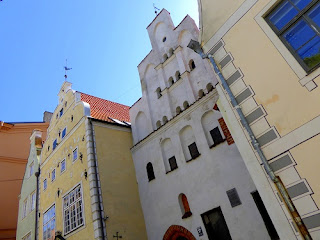 Kristaps' tour ended here - I've described and depicted the building where Wagner conducted in a previous post - and began with an interesting wander through the sensitively restored pedestrian streets of Bergs Bazaar (originally late 1800s) with their abundant cafes and restaurants, one of many fine pieces of discreet intervention by the architect Zaiga Gaile, whose work Kristaps understandably admires. 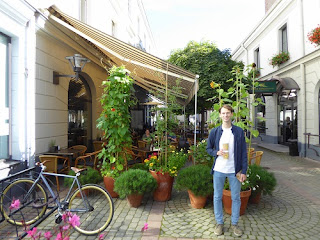 So much more of this ilk, and other districts to discover, when I return to Riga, which can't be too soon.
Posted by David at 21:43

We very nearly went to Riga when we were planning what ended up to be our trip to Finland and Tallinn. It is clearly a must. Some of the buildings remind me of Helsinki's Jugendstil style, and when I saw the photo of the Three Brothers, the Tallinn Three Sisters certainly came ito mind.

There is a peculiar atmosphere in the Baltic States - and I use "peculiar" in the older sense of special and individual. The reason can only be a matter for speculation, but perhaps I could speculate that the atmosphere reflects a mental state similar to that described by a former refugee now waking up each morning in Canada with a wonderful feeling of freedom. I have travelled extensively in the former communist states of central Europe and have not noticed this kind of atmosphere anywhere else. The perceived threat and to an extent the real threat from a resurgent Russia applies to the Baltic States as much as to Poland and the Czech Republic ( I wish they would change the name to Bohemia which was the name for a thousand years) - in fact more so, as the three countries and not the others were part of the USSR. Yet that does not seem to take away from the special and attractive personality on the Baltic

Dávid D: while I have only so far had an opportunity to dip a toe in, with our short visit to Tallinn, I was entranced. It was, indeed, not simply the beauty, but a more ineffable atmosphere, which you have now put words to with such insight.

David, though I haven't spent long enough in Latvia to make more than a superficial judgment, what you describe so wonderfully I find very true of the Estonians (as does Sue). My first visit there after nearly 30 years was a bit like a dream - maybe I idealised it a bit, but to see what a proud young nation had made of itself after my previous trip when there were fights between ethnic and Russian Estonians in the shops and a general atmosphere of terrible tension was something to marvel at. Remember how they responded to the Russian threat by forming a human chain along the entirety of the three Baltic countries, or Estonia's 'singing revolution'? It makes the thought of a threat to these places seem quite unbearable.

I hope to return to Latvia for its next choral festival next year. Estonia's should be a couple of years afterwards (every five years). And of course we have the big independence celebrations next year.

As always you travel for me dear friend. Many thanks.

You and Laurence would love the Baltic countries with their special atmospheres, as partly defined by David Damant above - assuming you haven't already been (I can't remember, forgive me).