It's there in this little philosophical gem, on a par with Tove Jansson's The Summer Book 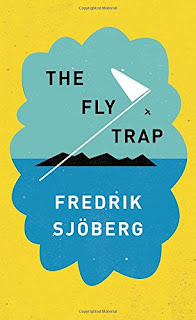 and the singers, dancers and musicians of Estonia's Kihnu island brought it with them, along with smiles, laughs and a general happiness you can't fake, to the 12 Star Gallery of Europe House the other week (photos by Jamie Smith). 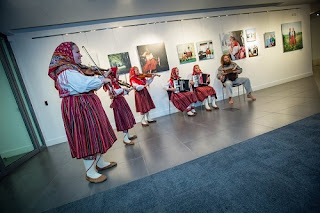 More on Mare and friends anon. In the meantime, I'm so glad I came across the American edition of Swedish entomologist Fredrik Sjöberg's The Fly Trap while browsing in Kensington Books (the author pictured below). A specialist in hoverflies, this splendid writer, translated with obvious style by Thomas Teal, has a rondo theme: 'the art and sometimes the bliss of limitation,' living as he does - or did, at the time of writing in 2014 - on Runmarö, a Swedish island of 300 inhabitants, much augmented by summer visitors. Here's the gist of it:

For an entomologist, 15 square kilometres is a whole world, a planet of its own. Not like a fairy tale you read to the kids again and again until they know it by heart. Not like a universe or a microcosm, similes I'm not willing to accept, but like a planet, neither more nor less - but with many white patches. Even if I were to swing my net an entire summer without adding a single species to my collection, the gaps in our knowledge will still be great, if not quite immeasurable. The fact is, they keep growing, keeping pace with our knowledge. 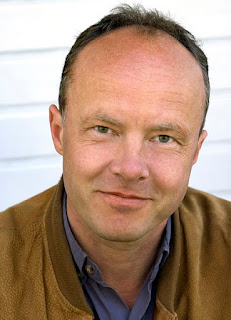 The issue, reduced to Strindberg's dismissive term 'buttonology,' connects with a parallel interest in the geologist's 'feeling for time' and Sjöberg's own attempt to 'grasp...temporal spaces so great they border on eternity' (Chapter 15. 'The Legible Landscape', is a masterpiece of writing about what we can grasp and where we stop). 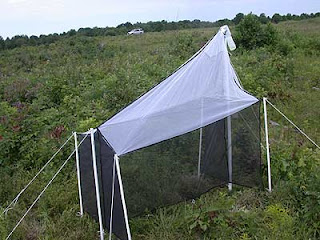 Yet the perceptions are not random, despite the fluidity of Sjöberg's ruminations, often tinged by wryness; and there's a parallel character study, of the marvellous man who invented the giant fly trap of the title (and pictured above), René Malaise, a Swede (despite his French name) born in Stockholm in 1892. What a life! Malaise might have limited himself to one area of expertise, study of the sawfly, but like Sjöberg he had interests elsewhere, too - there's a fascinating final chapter on his collection of grand masters - and he travelled. A lot. In 1920 he left Sweden with five other adventurous folk, four men and two women in total, to explore the remote Kamchatka peninsula. Sjöberg's news that the collection from a later expedition to Burma was lodged in Gothenburg's Museum of World Culture - here's a specimen - 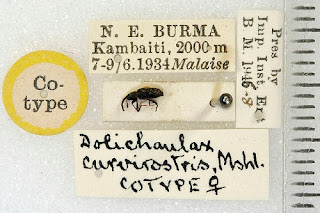 gave me a special quest when I was there the other week for Santtu-Matias Rouvali's first concert as the Gothenburg Symphony Orchestra's principal conductor. The helpful folk on the desk couldn't locate it, but there was a screening downstairs of photos from the Kamchatka adventure, one of three selected Swedish explorations.

A shot of Malaise himself came up on the screen, so I presume the Museum is happy for me to use the original online. 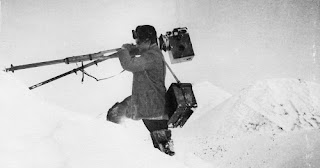 He took some splendid photos, like this one (though it may well be in Japan, which he visited after Kamchatka, and where he experienced a devastating earthquake). 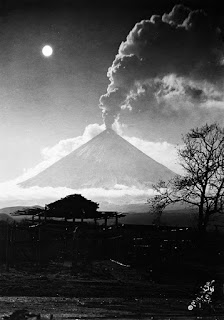 And here's company, though I have no idea why the woman's face is scratched out. 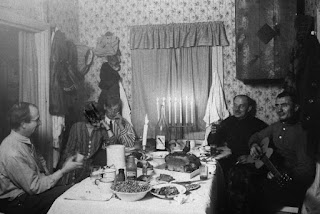 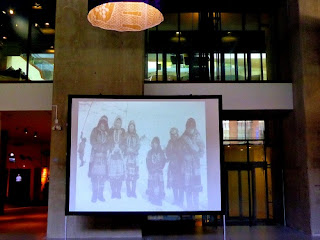 and a crate for the sort of thing I was actually hoping to see tucked away in the corner. 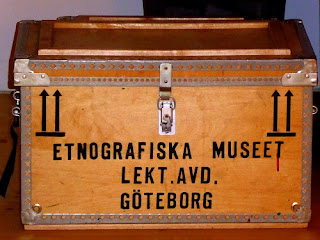 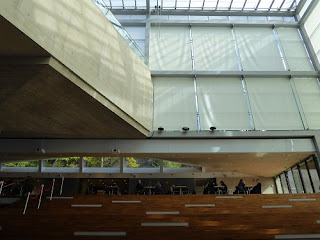 which extends on to a terrace. 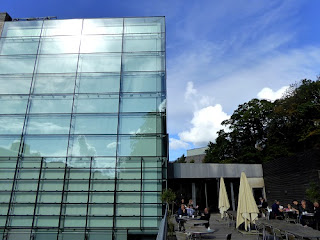 The exhibitions are there mostly to make schoolchildren think of the world around us. I loved the forthrightness of the display panels (in Swedish and English) in the way they described the plunder of the earth and the quashing of human rights. Like this: 'One could use many grave words to describe how a small percentage of the world's richest population have exploited the world around them in the past hundred years: irresponsibility, arrogance, greed and egoism'. I half expected an added 'so f*** you, 45th!' We could afford to be more direct in our language here. The fourth floor exhibition included a refugee boat whose occupiers had all drowned 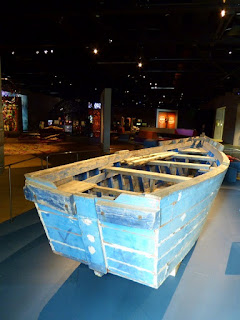 and this cabinet of items owned by Mexicans and south Americans trying to cross the border to the north, with information about some miserable fates. 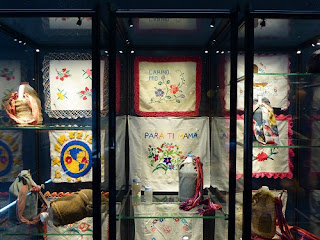 Which leads us back to the colourful woven dresses of the Kihnu islanders, living under happier circumstances and one of the most enlightened governments in the world. I first wrote about them describing our unforgettable day trip from Pärnu last summer, and I've managed to cut down for accommodation here one of the putatively 2000 year old wedding songs still in their repertoire, which they performed for us in a room of the island's museum.


It was so good to see once more Mare Mätas, the Tallinn-trained lawyer who'd returned to her native island to foster its UNESCO-protected culture, and the sweet accordion-playing girl who's won all sorts of awards in music competitions and has grown up quite a bit since then (she must be 11 now). There she is on the left. 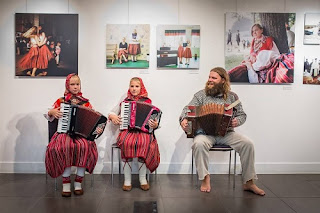 This time it wasn't just dancing ladies. The most jovial chap imaginable sang ballads to his accordion in a very splendid and idiomatic style, and his son came along too. They're demonstrating their splendid traditionally-designed and knitted jumpers, two months in the making, for Mare here. I want one (jumper). 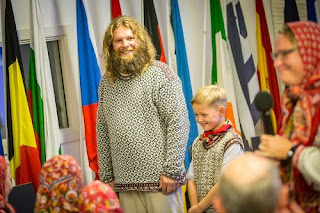 This was the other book-end reception of an exhibition of really superb Kihnu-people photos by the Frenchman Jérémie Jung, some of which formed a good backdrop to the performances. Clearly they loved him there, from their genuinely warm words about him, and when it came to joining in the dances, he knew all the steps (not featured here, but there was audience participation later). I do hope there's funding for a book of the pictures. And still, deep in my soul, there's the wish to spend a whole year on the island to see nature through all its seasons. No reason that shouldn't happen some time, if not for a while yet.
Posted by David at 09:48

I recall, when we were planning our trip to Finland/Tallinn, looking for summer music offerings. I don't know whether Kihnu was among the places I spotted, but there were many enticing byways we weren't, in the end, able to go down. Such things will have to remain on our wish list for another time, and your post is an inspiration. I love the way you segue from one thing to another here, and agree absolutely with the notion that choosing anything for intensive study, no matter how tiny it may seem at first, opens up into discoveries of planetary dimensions. My Mom used to take our Brownie troop on woodland walks, and she would stop periodically to point out miniature worlds of mosses qnd lichens along the way. We had no idea why she was bothering with such things, but of course she was right and we were just too young to understand. In later years, she served as docent at a fresh water preserve in San Diego, where once again, she made sure her group's, young and old and in between learned to pay attention and wonder at not only the de rigeur "big fish," but also the very smallest things. She's not able to walk well enough to do that anymore, which is everyone's loss.

I wish I'd had that sort of guidance when young, if only that, like you, I could return to thinking about it later. But some seed was planted from living in Surrey's green belt, and we can always find things out for ourselves. I've said it before, but were there such a thing as reincarnation I'd like to return as a botanist or a geologist, or anything that involved close study of the natural world.

You would like a Dutch lady on LinkedIn who runs a group called 'Waldenizing' and is especially interested in mosses and lichen. I was looking ar some on the station wall of West Malling only two days ago, wondering at how and where it pops up.

If you and J seek a week's or even a few days' break in perfect peace, I can't recommend that too strongly that you stay in Mare's accommodation on Kihnu (see previous entry linked to above). Maybe you could combine it with a trip to next year's Parnu Festival (it's an hour's boat ride from a nearby harbour). But now there's also the beautifully renovated stuga next to my friends Lucy and Mats's house on a Swedish lake - that, too, is rentable for a very reasonable price (layers for friends of friends) and within an hour by nearby train from Gothenburg. Happy to put you in touch with Lucy and/or Mare should you wish.

Thank you for the suggestion and offer, and I'm here to say nothing sounds more appealing than what you describe right about now!

I can see why, even though you live in a beautiful place, you need to escape the daily nightmare over there. Remember - advance - retreat for sanity's sake. It's too much. Every so often I question the reality of what I'm reading about it.