So-called 'situation' comedies seemed to have wilted on UK TV, or rather I'd stopped watching them. Until Peep Show and Rev. Then Fleabag. And now Quacks, taking as fine satirical target the medical discoveries and pretensions of the earfly Victorian era, and graced like the others by some of our finest actors. 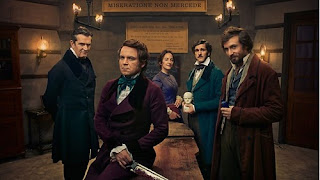 I'm also surprised we don't get more of the talking-head monologue after the success of Alan Bennett's classic series. It returned with panache in Queers, eight revealing 20-minute monologues about gay lives from 1918 through to the present day to celebrate the 50th anniversary of the decriminalisation of homosexual acts in private. Ben Whishaw kicked the whole thing off in soulful style as a soldier newly returned from the First World War. 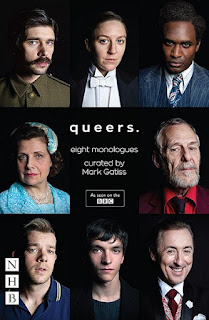 Good to see the scripts have been published by Nick Hearn Books; actors will want to take on some of these challenges, though they'd be hard-pressed to equal the telly originals (or the performers at the Old Vic, many of whom were different - wish I'd known about those at the time).

The standard of Mark Gatiss's great idea, with texts by a whole range of writers including Gatiss himself, tended to be uniformly high, let down only by Alan Cummings' pre-nuptial monologue, the sincerity undermined by the horrid mugging to camera. There were some real surprises, like Rebecca Front as Alice, the poignantly determined-to-be-cheerful wife of a gay man eventually liberated by the 1967 Sexual Offences Act. 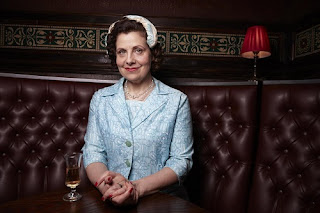 And I didn't know many of these actors, apart from Whishaw, Cummings and the ineffably sexy Russell Tovey, but would now look out anything they happen to appear in, be it on stage or screen. They're all infinitely superior to any of the younger actors in the stiff Mills-and-Boon drama Man in an Orange Shirt, complete with squishy score; I've enjoyed Patrick Gale's novels, but this seemed formulaic and - in the second episode about a young gay man afraid of intimacy - psychologically implausible.

Also unfamiliar was the creator of an unforgettable character in Quacks, Matthew Baynton as Victorian would-be-psychiatrist William who pushes the novel idea of talking rather than torture as therapy for the mentally unwell. 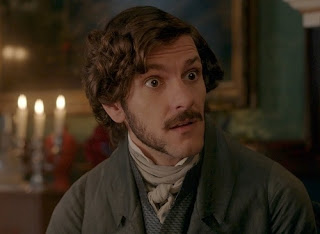 Cameos abound, all of them shrewdly observed. Rupert Everett's Dr Hendrick prefers not to examine female patients, using instead a dolly which he presses or asks the patient to press. He recommends a lady who clearly has cystitis to 'fast for a week, ride a horse for two hours a day, not Sundays, and place a freshly cooked baked potato on the infected area'.  Lisa Jackson as Mina, William's intended, by his mother, at least, relishes a romantic memory of a fairground visit which involved a helter-skelter ride and 'hitting dwarves with sticks'. And in Episode Two, we get both Florence Nightingale, duty-bound to worst our chief narcissist, in a pitch-perfect performance by Rory Kinnear, and Charles Dickens - good lord, that's our Hamlet of the moment, Andrew Scott, weirding us out with the great man's insecure vanity in his younger days. 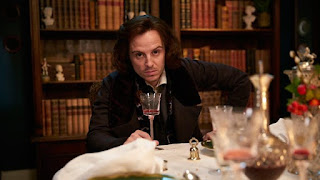 Lydia Leonard as the neglected wife battling with both an unruly libido and male resistance to a woman wanting to join the medical profession, and Tom Basden as a drug-intrigued dentist/anaesthetist complete the main quartet. Of course the operations, conducted by Kinnear's Robert in a blood-caked apron, make you have to turn away, and some folk didn't have the stomach to stay with the series beyond the first ten minutes. But if you do, you'll find the historical detail fine-tuned - by James Wood, co-writer of Rev and judicious spicer-up of Waugh's Decline and Fall for the excellent TV serialisation - and laugh out loud at regular intervals. Cure from this elixir guaranteed, or your shilling back.
Posted by David at 12:38