Norfolk churches: why we walk 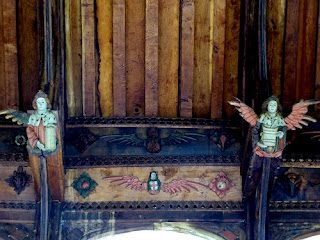 With the fundraiser for the Norfolk Churches Trust imminent, I thought an advertisement for what we do and why we do it wouldn't go amiss. And what better demonstration of how funds can save an historical and architectural gem than the restoration of Knapton's Church of St Peter and St Paul? 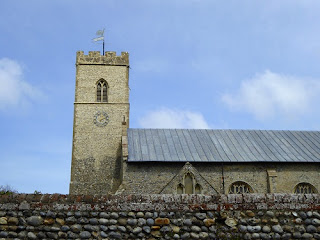 It was very much shut off when we passed it last year at the time (though not on the very day) of our last walk. Admittedly the money that's preserved it came from the National Lottery Fund; but the point of how much is needed to save these places which struggle with a small and ageing congregation is the same.

Restoration work at Knapton didn't involve the magnificent double hammerbeam roof of Irish oak with 138 angels (more on that anon). It included the removal of asbestos from the tower and repairs to its stonework as well as the chancel arch and the south roof. 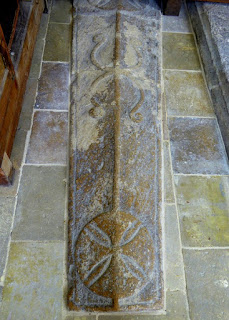 A collection of medieval stone coffin made of Barnack stone and Purbeck marble, dating from between 1120 and the mid thirteenth century were relocated - from where the new guide (also produced thanks to Lottery funds) doesn't say, but they all looked good with the sunlight slanting in on them through the chancel windows. 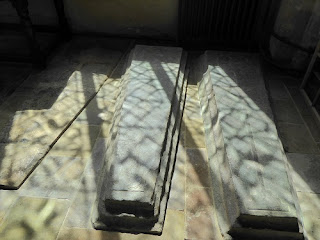 All predate the present church, the earliest parts of which are early 14th century, including the tower and porch with its 'handsome tripartite niche' (Pevsner). 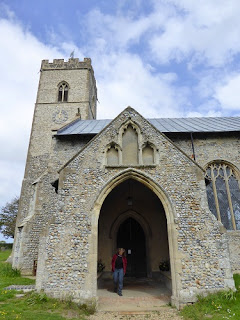 First thing you see through the porch door is the font. 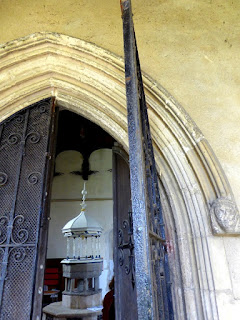 It's 13th century but notable more for its 1704 cover, 'a gay piece with thin balusters and an ogee top'. 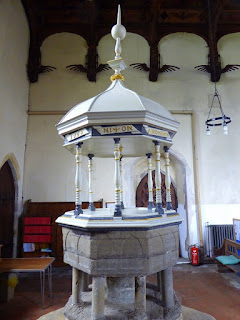 'The Greek inscription means: Wash my sins and not my face only'. 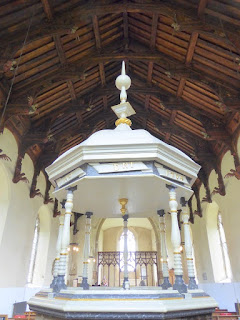 Then of course there's the roof, besides which, Pevsner rather meanly notes, 'the rest palls' (apart from the font). Certainly, as he notes, not all the angels are original and we know that the ones at the foot of the wall posts were the work of George Gilbert Scott's 1882 restoration. 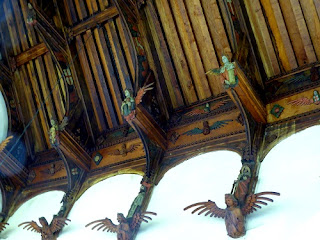 No matter; they complete the picturesque whole, and some of the painting dates from just after the roof of 1504. 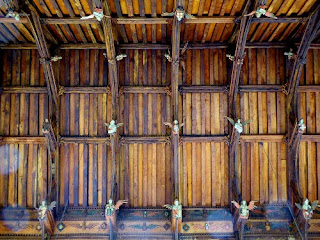 Detail is cheery and sweet. 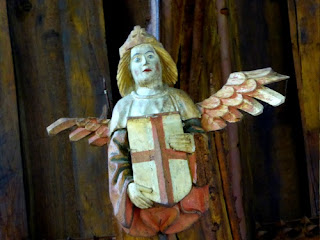 Walking around the tower 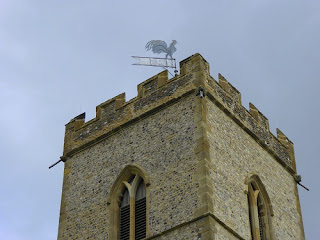 gave us different perspectives on the splendid weather-vane, designed by John Sell Cotman when he gave a drawing lesson at Knapton House (he also sketched the church). 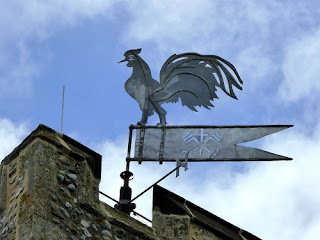 The churchyard offers perspectives towards the sea through the hedge, and is nicely lined with cherry trees and lilacs. 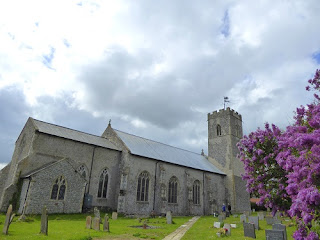 Our Easter visit was nicely complemented by the obligatory crab and lobster at the Overstrand shack and a brisk walk along the cliffs towards Cromer - the bluebells on the edge date the walk. This year we're promised plenty of coastal scenery, weather permitting. 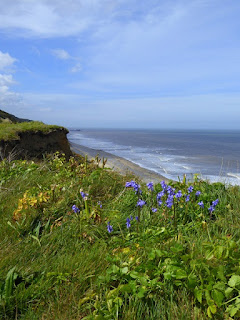 One more church in much need of repair we made the subject of a morning walk on our last day at Southrepps back in early August. A pleasant five or so mile round walk from base takes you along  the lower board walk of the common at Lower Southrepps and then around fields, along the hedge of one of which were swarms of dragonflies and damselflies, rather oddly as there was no water in sight, and then up to St Giles Bradfield, in a clump of trees surrounded by open land from which you can see four other church towers. 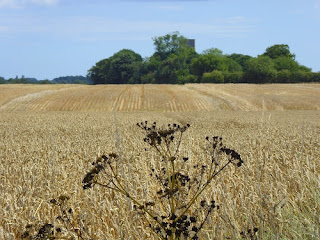 The setting, with the church tower disappearing as you edge the woodland until there it suddenly appears, 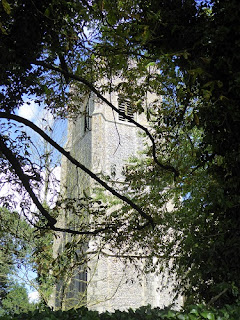 is what the Italians would call molto suggestivo. In August the overgrown churchyard and the slight air of dilapidation is attractive, 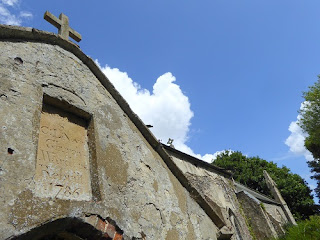 but help will be needed sooner or later. The interior is praised by Pevsner for its 'exceptionally fine Dec chancel, remembered by its E wall with a five light window' 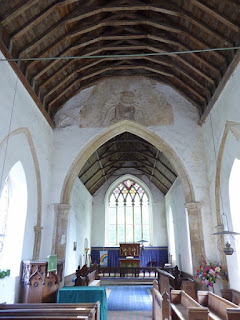 and the real speciality, a wall painting of 'Christ on a rainbow displaying his wounds'. 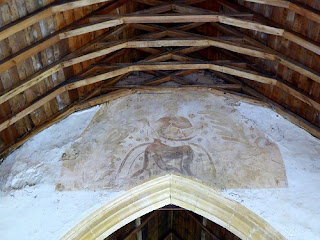 The font has an 'octagonal stem with eight attached shafts' and 'bowl with alternating panels of two ogee arches and of a four-petalled tracery form'. 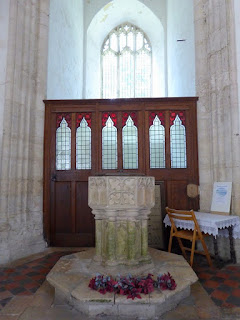 I liked the look of these rusty fittings on the porch door - I assume that this is what Pevsner means by 'plate for the knocker of the C13'. 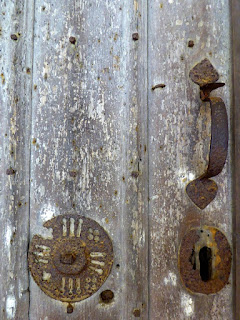 All walls of the outside have their attractions. The south ends in one of the pinnacles of the chancel, 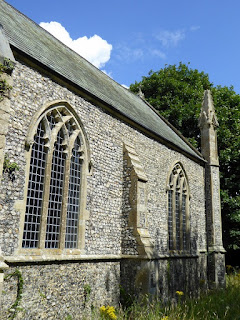 and there are heads at the four bases of two windows. 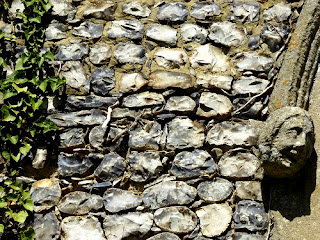 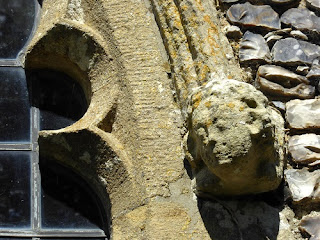 The east end looked impressive with storm clouds massing behind it (we got a heavy rainfall later, but not until about an hour after arriving back for lunch) 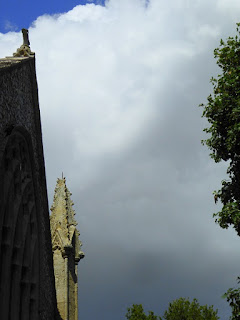 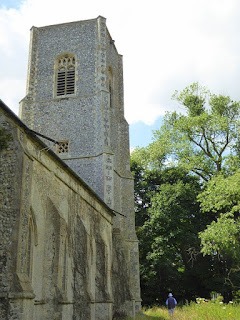 with interesting traces of where presumably the ivy had been. 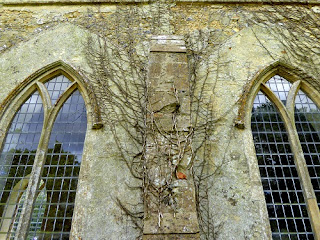 If any of our forthcoming stretch is as satisfying as the route of this little excursion, we'll be very happy. And if you feel like sponsoring us - though this is never a useful way of raising funds - just leave a message here which probably won't need to be sent 'live', but I'll respond if you leave your email.
Posted by David at 09:25

I've forwarded this to a friend with a weekend place at Binham. She's a keen admirer of Norfolk churches.

Thanks, Deborah - and you?