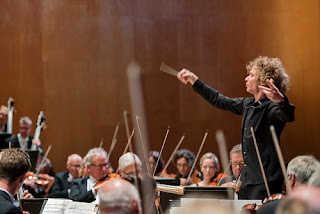 It's clearly the start of a new golden age for the Gothenburg Symphony Orchestra (Göteborgs Symfoniker). While the UK establishment was going ape over Rattle's first official night at the helm of the London Symphony Orchestra on Thursday, I still guess I was getting a better deal over on the west coast of Sweden, where the GSO has appointed 31-year old Finn Santtu-Matias Rouvali as its chefdirigent (pictured above by Ola Kjelbye). Exactly the sort of new adventure on which I'd hoped the LSO would embark - Ticciati would have been my ideal choice - before it settled for our most famous, and only fitfully brilliant, cultural export to Berlin, now back with fanfares galore. Name recognition, I guess. As it is, I reckon the Philharmonia is a more exciting London orchestra with Esa-Pekka in charge, Rouvali and another brilliant younger-generation spark, Jakub Hrůša as principal guest conductors (both appointed, I gather, with Salonen's input alongside the players'). 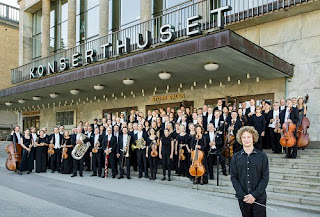 My report of first acquaintance with Rouvali was going to tie in with a very quirky interview which will appear on The Arts Desk before his first Philharmonia concert of the season on 5 October. But I can't contain my excitement about the concert in question until then. It was, in any case, quite an emotional visit - though I've returned to Sweden many times in recent years, I hadn't been to Gothenburg since 1990. The previous year I was invited there to leave with Neeme Järvi and the orchestra on tour to Estonia, the first time he'd been back to his homeland since he in essence defected with his family in 1980. The next trip was to hear him recording Prokofiev's The Fiery Angel. Järvi's momentous tenure in Gothenburg lasted from 1982 - I actually heard the team for the first time in London in 1980, first remembered here - to 2004. I was happy to see a bust of the great man in the Konserthuset foyer 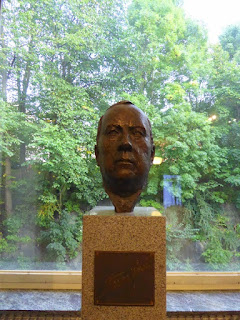 not far along from Nielsen and Grieg (Stenhammar is also here, of course, represented both as composer and as the GSO's principal conductor between 1907 and 1922). 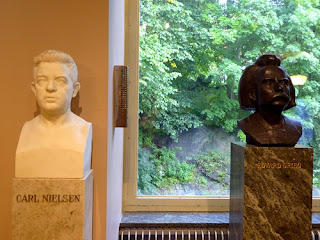 Järvi's successor, Mario Venzago, left little impression; Dudamel was snapped up in 2007 and gave some excellent concerts with the orchestra but his heart was still in Venezuela and LA. The principal post remained unfilled for five years, until now.

The bar for Sibelius's first authentic large-scale work was set impossibly high: nothing could surpass the Kullervo of Sakari Oramo, the BBC Symphony Orchestra and a wall of stalwart Finnish male voices with the BBC Singers at the 2009 Proms, my highlight of that season (and now on one of the best BBC Music Magazine cover discs ever). Read all about it alongside an illustrated population of cats and dogs from the Kalevala here. This was simply on the same extraordinary level, and stupendous on very different terms (since it would not be possible to surpass what Oramo and his team achieved).  Rouvali's precise beat combined with a dance-like bendiness means that everything is riveting; there's no such thing as peaks and troughs - even the few pianissimos buzzed with inner life. Only in the battle sequence, potentially repetitive, did he grade the intensity. 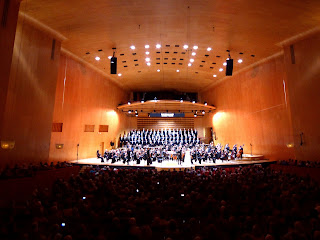 The reaction may also have something to do with where I was sitting - in the middle of the raised seats at the back of Gothenburg's magnificent 1935 concert auditorium, 'a crab in a rectangle,' as architect Nils Einar Eriksson described it in relation to its outer shell. The sound is very in-yer-face there, with woodwind sounding individually spotlit (the repeated-note oboe figures in the second movement were disconcerting, but in the right way). Sibelius's telling of a typical unhappy-hero sage from the Kalevala is unique, rough and direct, full of startling sounds and balances that need to be carefully worked through (Rouvali had made some of his own emendations to the score to foreshadow stuff in the symphonies to come - more on that in the interview).

So the orchestral playing was magnificent. Leading question, though: could the men of the famous Orphei Drängar from Uppsala possibly match the impact of the Finns at the Proms? They did - I have it on good authority that their Finnish articulation was impeccable - and similarly raised goosebumps on their first entry, tears at the last. Here are two of them walking towards the hall not long before the performance. 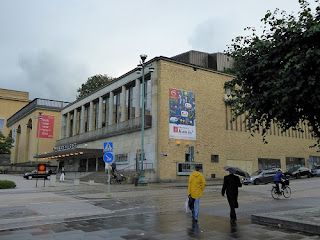 The weather, incidentally, was magnificent each day until late afternoon - more on my time by a Swedish lake and in town anon. Just as a taster, this is what I was doing on the morning of the concert, some way north. 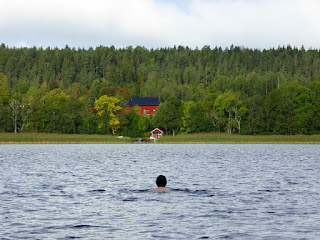 But I digress, with the hope that Sibelius might approve. To return to the concert, the big central drama, where Kullervo seduces a maiden who turns out to be his own long-lost sister, an unhappy twist on the Siegmund-Sieglinde predicament, seemed more operatic than ever. Real-life sister and brother Johanna and Ville Rusanen entered from opposite sides during the kick-off, and the soprano suggested that she would already make a magnificent Brünnhilde (she also sang Kullervo's Sister for Oramo). In the absence of a professional photographer, I took one curtain call shot which is OK enough to use here. 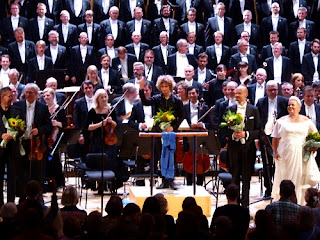 I felt as if I'd lived through a big Wagnerian experience every inch as involving as that of the Budapest Ring. But Sibelius is not in thrall to Wagner, or Bruckner; if anything, this 1892 work anticipates Janáček's originality by nearly a decade. And you'll have gathered that the performance was well worth the trip. It should be back up on the orchestra's excellent website not too long after the livestreaming of the Saturday performance. In the meantime, take a look there (scroll down) at Rouvali's performances of other Sibelius, Stravinsky's Petrushka and Janáček's Taras Bulba - the last two only available until 1 October - and watch this 360 degree experiment in which first horn Lisa Ford introduces Rouvali in a rehearsal of Smetana's "Vltava" from Má vlast before the complete live experience (at around the five-minute mark, if you don't want the chat). It makes Rouvali's special qualities very clear.


Exciting times for orchestras all around the world at the moment with so many new major talents popping up everywhere.
Posted by David at 19:17

So looks like Salonen continues to know how to pick 'em, doesn't he? Am looking forward to the start of my NYC musical season in a couple weeks. First up is a new Norma with Sondra Radvanovsky in the title role and Carlo Rizzi conducting. Rizzi is new to me, SR I saw in the three Donizetti queens maybe last year, and, while I didn't warm to her as much at first, she won me over in Roberto Devereux.

Yes, he sure does - and his own concerts are still very exciting too. Mind you, I'm eating my words up to a point about Rattle - his Stravinsky triple bill really was electric, the LSO seemed transformed. But I don't think he could have conducted a fluid score like that of Enescu's masterly opera Oedipe anything like as well as Vladimir Jurowski did tonight. Horses for courses.

And if any conductor can turn me back to the bel canto rep - my least favourite - it's Rizzi. He even made me fall in love with the chunks of Lucia he performed with Joyce El-Khoury and Michael Spyres in July. As for Norma, well, at least it has the ravishing 'Casta diva' and two great duets for women. The rest I can take or leave. Enjoy!

I'm glad to know about Rizzi. Your précis of Norma is right in my line (though I haven't your expertise to draw on, to say the least). I have never heard it live, so it's worth a trip, but had the offerings this year (or any year, really) at the Met been more diverse, Norma likely would not have made it to the list. The conservatism in Met programming is stifling. There are, for one, so many Britten operas I'd love to hear live (or hear again) not to mention Janacek and scores of others I know about that have never been offered, and of course works to which I'd like to be introduced. As to that, seeing a well-performed Kullervo live would be thrilling. Glad to know Rattle's Stravinsky was so good. And yes, the overhyping doesn't serve anyone well. Each conductor, I would assume, must be well-matched to the works s/he conducts. One of Rattle's most egregious interpretive sins, to my mind, was to think, in his Sibelius cycle, it was the least bit appropriate to perform the sixth and the seventh as a single piece, thus destroying the gorgeous arc of the seventh.

PS Enescu's Oedipe, about which I learn here from you, is a case in point of the kind of opera the Met SHOULD program, and PS with VJ conducting. Lucky you!

I think we had that conversation about Rattle running 6 and 7 together. My own special objection is that 6 has the most enigmatic ending of all; it could just as well have been the coda to the symphonies as the nobler end of 7. I live in hope that some day, someone will place it last in a concert. Actually I'm not too happy with the way the symphonies are placed in Oramo's forthcoming cycle, though there are many interesting companion works.

Do listen to the Rattle Stravinskys on the iPlayer - I believe you can get sound from Radio 3, no?

Oedipe review is ready and should appear on TAD first thing tomorrow morning. It would take a megastar like Bryn Terfel to sell it - though the part is more bass than baritone.