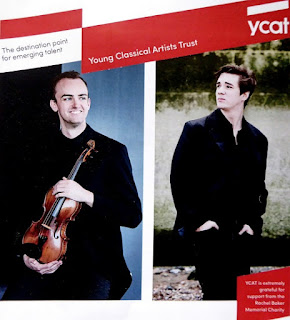 And by two exceptional, mature artists still in their twenties, my (now) good friend the New Zealand violinist Benjamin Baker and Hungarian-born pianist Daniel Lebhardt. It's slightly frustrating that I can't with a good conscience review Ben's concerts on sites like The Arts Desk any more - last time I legitimately did so was here - but this is my blog, so my rules, and you can believe what I write or not.

What I do know is that after 30-plus years in the business, I can tune into what's truly exceptional from a performer pretty quickly - whether it's in the all-ears circumstances of a recital or on those occasions where I put a CD on for pleasure, not for review - though there is pleasure, of course, in that too, but I'm always sitting there with a score, which in the former instance isn't usually the case. There something idiosyncratic and strongly communicative in the playing makes me stop and listen more intently. A PR sent me some Beethoven violin sonatas discs on DG featuring an artist she thought I might like to interview, Francesca Dego. Perfectly cultivated playing, nothing special, so - no thanks. Whereas in Ben's and Daniel's performance of Beethoven's "Kreutzer" Sonata in a Young Classical Artists Trust Wigmore lunchtime recital last Tuesday, there was individuality from the start. And, it especially struck me, in two specific bars, starting with the last one here. 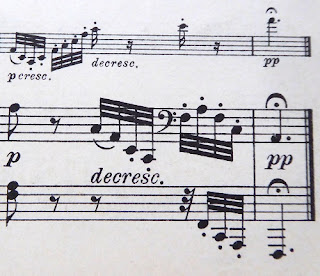 You couldn't take them in isolation; all musical argument springs from the relationship between one note and another. I was just wondering at the way both achieved a unanimous, atmospheric diminuendo on the final unison F of the central Andante con variazioni (above), fading to nothing, when Lebhardt burst in with the ff A major chord that launches the Presto finale. 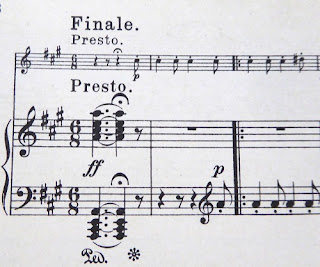 Perfect timing, and the essence of drama in musical extremes.

It was a perfect pairing with Janáček's typically fierce, jagged and shining Violin Sonata (remember that Janáček also based his First String Quartet on the horrific drama of Tolstoy's novella The Kreutzer Sonata - I'm hoping that Ben's pal from Yehudi Menuhin School days, Jonathan Bloxham, might feature Terje Tønnesen's string orchestra arrangement of that in next year's Northern Chords Festival, with Ben and Daniel on hand to play the Beethoven original. Violinist and conductor/cellist teamed up, of course, at this year's superlative Europe Day Concert).

Fierceness and painful beauty were in perfect balance here - and the duo have been playing it a lot recently, not least on a tour of China. The encore was a surprise, serious and not showy - I was guessing some homage to Tchaikovsky or other, but by whom I couldn't guess. It turned out to be a Dumka by the young Janáček. Here's a film of Ben in the Sonata with another partner, Shir Semmel, at Ravinia's Steans Music Institute.


Ben's next London concert sees him tackling another Everest - Berg's Violin Concerto - in a fabulous programme from the Salomon Orchestra at St John's Smith Square on 16 October which also include's Schmidt's Fourth Symphony. Having heard the Second at the Proms - Vienna Phil under Bychkov, embodied now in a sensational recording - I can't wait to experience that one live, too.
Posted by David at 08:37

Had I another life to live, here are two things (among others) to which I would aspire: first, to be able to read a score as if it were an ordinary book, as my GCAS friend Brian can and I am sure you can as well; second, to be able to distinguish the competent from the extraordinary in two bars, as you have done in what you report here.

Well, I have to say that I still couldn't really tell what a new piece was going to sound like simply from reading a score before hearing a performance. But you can follow, no? So just keep on with that and, like learning a language, it will fall into place.

I am, at least, chuffed that Ben told me recently he and Daniel worked specially hard on those two bars - and he was chuffed that I noticed.

All the MORE to your credit that you noticed those two bars. On keeping on with it, David, darling (as Sophie might say), you don't know how much you know and can't simply be "picked up," though that doesn't mean it's not worthwhile to give a score a whirl, as there's lots of fascinating info there, even for those not technically trained. BUT reading for harmony, as one of probably many examples, is completely beyond reach unless you have technical knowledge. At my stage in life, it's not something I'm willing to take on, so reincarnation will have to be the method!

I think it's probably enough just to see which instruments, or groups of instruments, are playing what, and how (if, for instance, the strings have the mutes on, or how many parts they're divided in to for some extraordinary effects). I was always a sloppy harmony student, so I wouldn't bother about that. Few music writers are equally perceptive in every area. Take your pick - orchestration, dynamics, rhythm, melody, harmony...


Your comment about harmony is particularly interesting, and I have had some experience with discoveries of the type that are, truly, available to anyone who takes the time. I will never forget my first perusal of a score, by Qigang Chen, and making the discovery of the sounds made by the woodblock and contrabassoon. His score markings were equally interesting. (The work was Reflet d'un Temps Disparu.)

Some scores are an encyclopedia of detail that is fascinating just to read as text - Mahler's injunctions, for instance (with a German dictionary to hand), and even Puccini's - it's all there. Scriabin is a hoot (with instructions like 'avec une ivresse toujours croissante' and 'voluptueux, presque delire'.