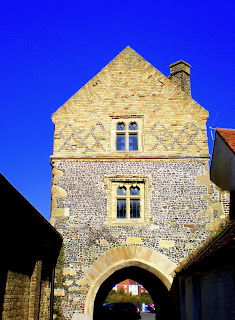 Bit of a dilemma on the Sunday morning a week ago following Mirabel's christening in Wingham. We'd only just enjoyed a peaceful night in the row of cottages where we'd been put up in the heart of Sandwich; there was a delicious breakfast featuring bacon and scrambled eggs with the other odd couples, all of whom we liked enormously, on the lawn. And then the proposal was to meet up with Edsy and the others at the famous ice cream parlour at Deal (the one, as she later told me, where the matron of St Bartholomew's friends had met their future husbands in the 1950s). 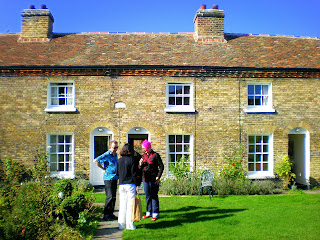 Well, I don't eat ice cream, much as I'd like to, but I did want to see the gang. Unfortunately I wanted still more to see the churches and buildings of England's 'completest medieval town' (Pevsner). Must have come here as a kid: what I do remember is the excitement of the toll bridge, charges abandoned in 1977 (that dates me). So I let them all drive away, vowed to meet them in Deal by walking along the coast, and strode off to explore with various guide books in hand. I never got to Deal; after three hours I was still exploring this loveliest of the Cinque Ports, brought into sharp focus in the October sunshine.

Sandwich's fluctuating fortunes were in a sense its salvation. Its rich haven silted up in the late 13th/early 14th centuries, draining prosperity and pickling the medieval town; later Elizabeth's protection to Protestants brought Flemish and French craftsman - including my ancestors the Huguenots - to revitalise trade, after which Sandwich slid graciously into relative obscurity as a market town. 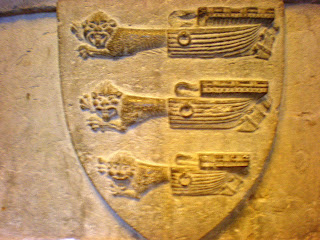 It has three huge churches, two of them kept going by the Churches Conservation Trust, hurrah (St Mary's is a lively arts centre). St Peter's feels like the parish church, bang in the centre of town, but that honour shifted to off-beam St Clement's after the merging of three parishes in 1948. That's the only one of the three with its original Norman tower (currently under scaffolding). St Peter's tower collapsed in 1661 and the building was handsomely repaired by the Dutch settlers. Its former churchyard is now a picnic spot and looks over to the church and its attached priests' lodgings at the south-east corner, as well as across to St Peter's Street. 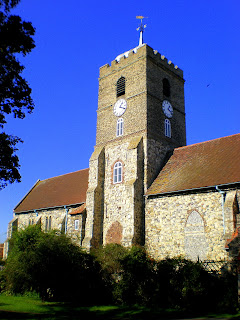 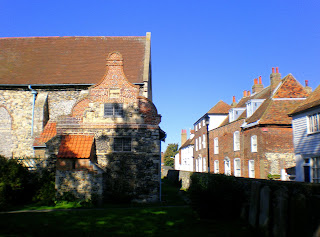 The inside is impressively bare, following the CCT brief (not sure why the fire engine is stuck in there, though). 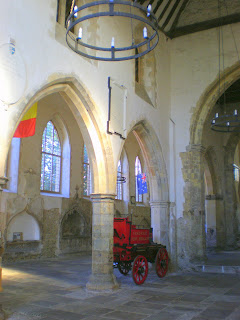 It has several fine monuments, including one of a 13th century knight 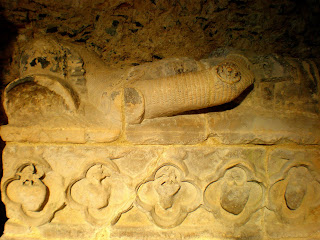 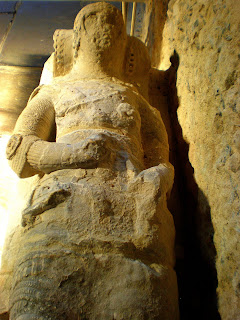 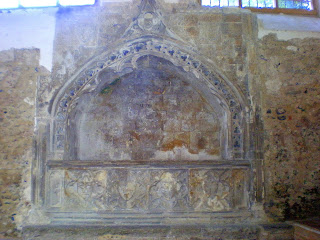 as well as another effigy of a 1360s couple, their heads turned outwards to peek at the altar. 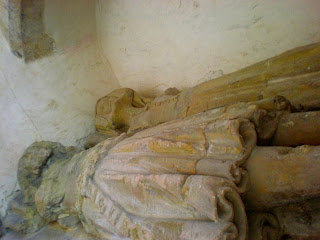 St Clement was buzzing with a flower festival when I arrived there. Nothing outlandish, as is often the case with the artistic ambitions of parish ladies, but plenty of adornment, including this one in the central tower looking west towards the angel roof. 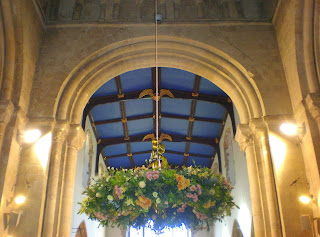 The doorway to the north west stair turret has a tympanum with a stag and fantastical Norman decoration. 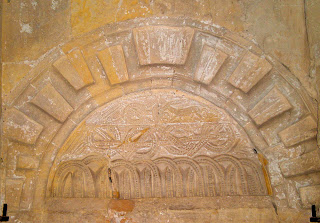 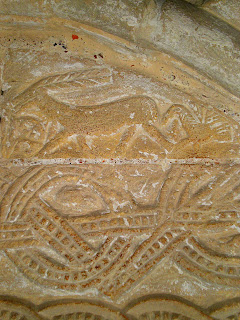 There's another leafy and extensive churchyard surrounded by streets, and this time venerably headstoned. 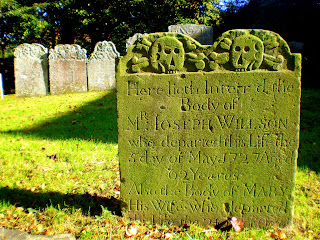 So I strolled around the very quiet eastern zone and Lutyens's not especially impressive neo-Queen Anne house The Salutation, where I found some pretty painted maracas for Mirabel in the shop, and then along Strand Street with its wealthy 15th century merchants' houses 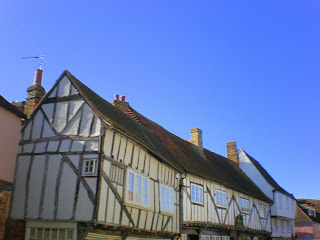 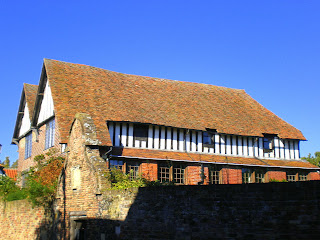 to St Mary the Virgin. Again, a tower fell and the interior was patched together to form a colossally wide nave and a north aisle. 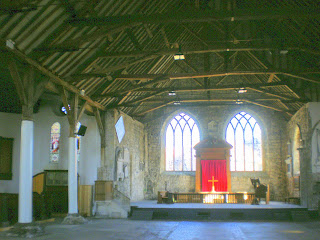 There's a monument to Solomon Hougham with a quirky poem and, on the facing north chancel wall, several more including what Pevsner's John Newman describes as a 'heavy tablet with sobbing female' of 1850. 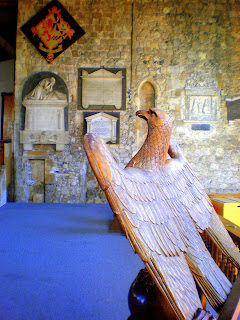 That was as much as I dared have time for within the town walls, but I hadn't bargained for the excursion to St Bartholomew's Hospital and Chapel, which is what stopped me striding off to Deal. There was another effigy of a medieval knight to be seen here, angels supporting his canopy. 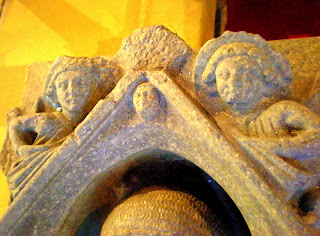 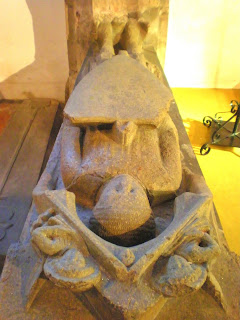 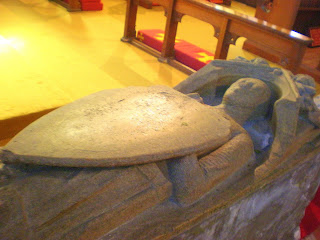 The chapel, which turned out to be subject to a heavy Victorian restoration, was locked when I got there, but one of the incumbents of the houses ringing it, still charitably-funded refuges for what a 14th century record describes as 'old and decayed people not under 50', sent me in the direction of the matron's house to get the key. 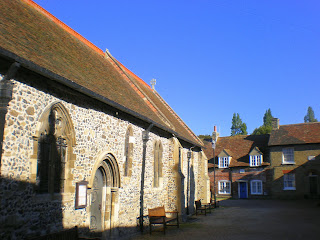 She was a charming lady, constantly telling me not to rush, and she filled me in a bit on the site's long and continuous history. Before it became a shelter for sixteen Sandwikian 'hospitallians', as they're still called, it provided accommodation and shelter for pilgrims who either couldn't get in to Sandwich after dark, when the gates were shut, or couldn't be admitted for fear of spreading infection. Every St Bartholomew's Day - in 1217 it marked a victory over the French - local children run around the church and are given a special bun. 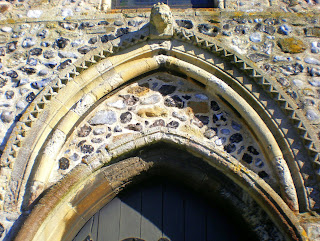 Well, I should have made haste to Deal, but I suspected the party might be dissolving around 3.30pm, so I phoned Merrie, who picked me up and off we drove to Canterbury to catch the train back to London. So much still to explore, though, in this historically rich part of South East England.
Posted by David at 10:34

Looks thoroughly enchanting and as if the weather perfect for poking around. Wish I could have followed along after you!