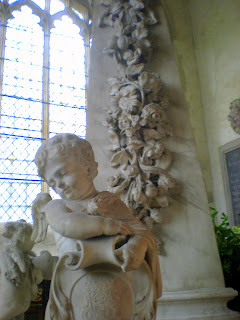 They took over a whole transept in the light and airy Kent church of St Mary the Virgin Wingham, encased it on the west and north with wrought iron screens, paved the floor with marble and stuck a great big obelisk-monument in the middle so that, as the present priest lamented to me, you can't really fit a congregation in if you want to hold a service there. 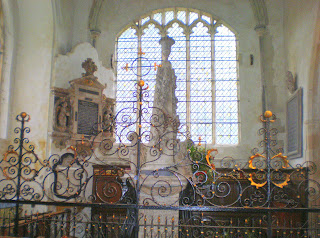 Well, they should be so lucky. Folk come from far and wide to see the Oxenden memorial of 1682, celebrating a family of lawyers and landowners. The obelisk itself with its tumbling fruit is a wonderful piece of work; 'at that date', opines the often rather sneery John Newman in the Pevsner guide to North East and East Kent, 'who could have carved it but Arnold Quellin or his pupil, Gibbons?' Certainly Grinlingesque are the fruits.

But the base is also very individual, with ox heads punning on the family name 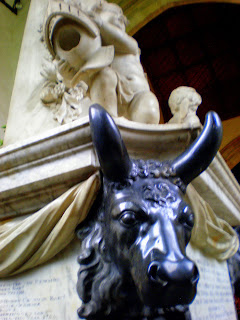 and four putti in various poses - two with shields of arms, one clasping the helmet, another a skull. 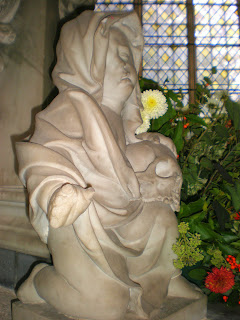 There's also a fine monument in the chapel to Charles Tripp flanked by mannerist angels, but alas my photos - taken in natural light because flash flattens sculpture, as you see from the one non-natural exception above - are too camera-shaky. We were fortunate to see into the north transept, now the vestry and usually locked, housing another good piece of work, the tomb of the Palmer family (1624). 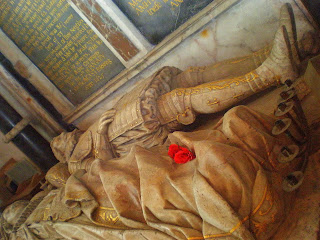 Another Palmer is high on the opposite, west, wall, with a rather amusing and poorly-executed bust of the mustachioed dedicatee. 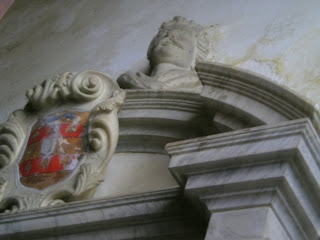 St Mary has another major treasure, not indigenous and described by Newman as 'very bad, but extremely rare in England': a 15th century stone reredos, donated by a local worthy in 1934 and thought to be from Troyes in France. We begged to differ with our architectural guide about the poverty, at least in terms of the well-characterised invention. Among the upper five panels is a flagellation 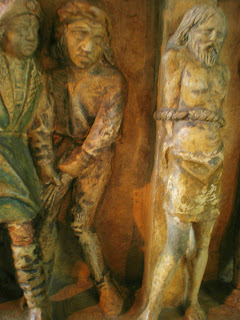 and the lower row features the Adoration of the Kings and the Last Supper. 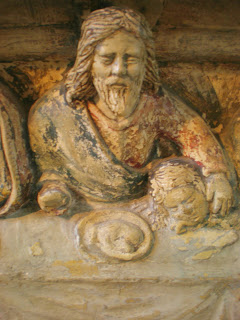 The very zealous and enthusiastic sacristan, proudly wearing the outfit she sports around the village, also drew our attention to the misericords, including a fine green man in the centre of the block. 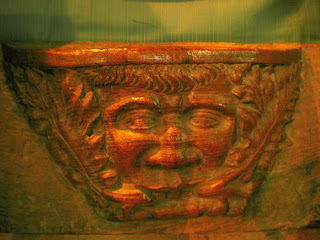 The overall impression of St Mary inside is a little strange, since some of the pillars in the nave are timber, of an obviously very durable local chestnut wood, rather than stone. Apparently this is because during the rebuilding of the mid-16th century, the man responsible for collecting the money, one George Ffogarde, brewer of Canterbury, embezzled the funds.

And all this was extra, because we'd come for the christening of Mirabel Dora Alice Ashton Poulson. As her adorable and very talented artist ma Edwina/Edsy/Edna has featured here before, I'm sure she won't mind one occasional photo: 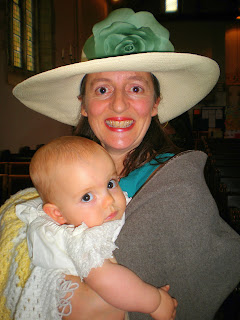 Mirabel's pa Kit read from the end of Coleridge's Frost at Midnight, which made me wonder why I haven't acquainted myself with more by that marvellous poet. The service was well attended by the Ashton menagerie - strike, family: 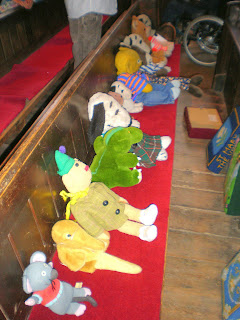 The odious Mr Pantz, arrogant star of a celebrated movie by Edwina and Matt Rudkin, was excluded from the service, but muscled in to the reception over the road, where he could be found sticking his proboscis into the christening cake. 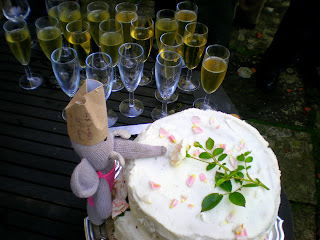 Mirabel loved her Russian apple, a temporary gift via Maggi Hambling who'd been given a bag by her taxi driver on the way to Moscow Airport last week, courtesy of his mother's dacha orchard. The babs also strummed a bit at a piano session. And then it was back to our dinky little cottages bang in the centre of Sandwich, a town chock-full of medieval wonders which I must return to in a not-too-distant entry.
Posted by David at 09:19

You lead a charmed life you know - surrounded by so much beauty - visual and aural. I envy you but love the fact that I can enjoy it all vicariously through you.

And you live in Rome, so things aren't so bad, allora...? But yes, it amazes me more and more what pockets of treasures are to be found on my own doorstep. Especially in the churches.

It is David himself who sees the beauty

It is there for others to see, but they do not