A second hymn to Lynn 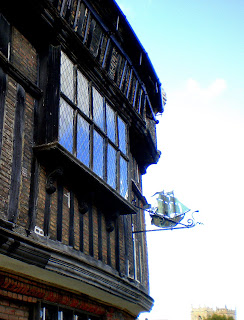 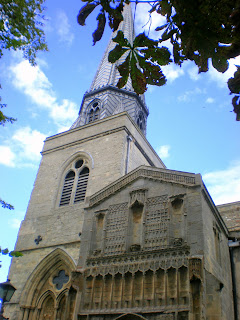 It's now over two years since we properly began to discover King's Lynn, one of the most extensive and perfectly-preserved old towns of England, courtesy both of our friend Jill who has a home in the former Benedictine priory there and of our ongoing Norfolk churches walks, and the wonders continue to unfold.

For the past few years, the September Sunday after our Saturday of walking has also been Open House day in town. We thought we'd peered into most of the hidden courtyards, undercrofts and timbered rooms already, but there was an addition to the list this year: the Greenland Fisheries building with its oversailing upper floor which stands on the edge of the old town and has just been done up, awaiting occupancy. 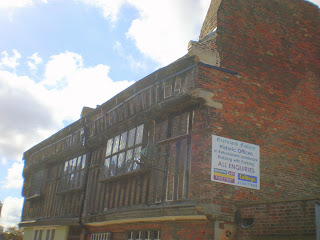 So for the first time we were able to see the Jacobean wall-paintings there, and very splendid they are too. Here's Hope 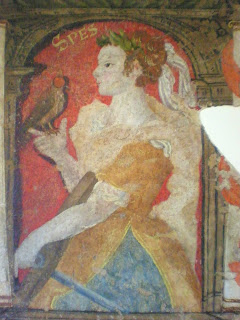 and what looks like a reclining Neptune on a sea of hellfire. 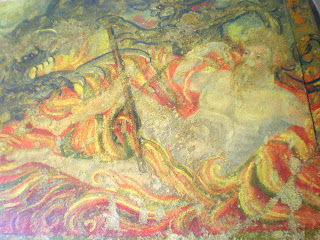 I also wanted to spend longer than we had two years ago in the most spacious ecclesiastical glory I've seen in Norfolk next to Norwich Cathedral, St Nicholas, which isn't even the quasi-cathedral of Lynn - that would be the impressive jumble of St Margaret - but its chapel of ease. In the earlier entry, I gave us a glimpse of the stunning angel roof and the monuments, but I hadn't inspected the bench ends in the chancel 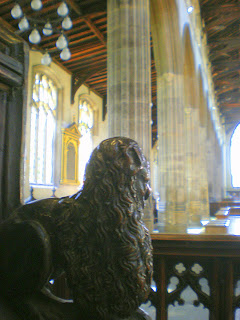 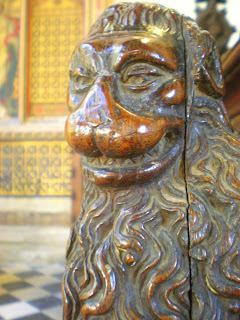 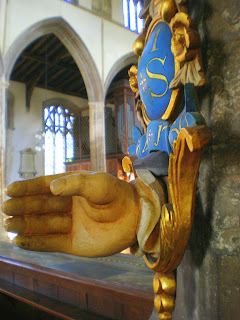 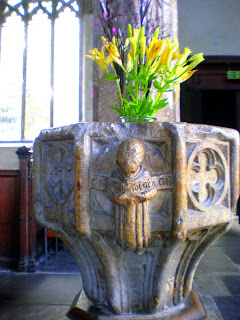 nor the South Porch (facade illustrated up top). The bosses of its lovely lierne star vault have been garishly regilded, and I'm not at all sure about the pink paint 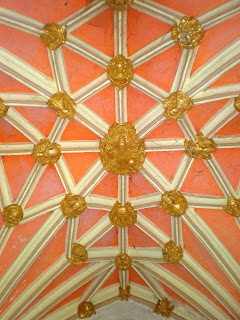 but some of the supporting heads are curious, to say the least. 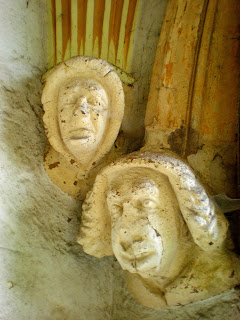 Once again I recommend Simon Knott's inestimable Norfolk Churches Site for further details. The entry on St. Nicholas begins with a hymn to Lynn better than anything I can manage, and which says it all for me, so I'll take the liberty of quoting it in full here:

Kings Lynn, the friendliest of all East Anglian towns, is so far away from anywhere else of any size that it has a fierce independence. It is as though it is in Norfolk, but not really of it. The town is in the Yorkshire television area, and this is not unreasonable, since it looks towards Hull and Lincoln as much as it does towards Norwich and Cambridge. All the northern Fenland comes here on a Saturday to shop, and two of England's biggest churches stand half a mile apart at either end of the main shopping street. We have already met St Margaret, the southern one, a great cruciform parish church on the Saturday Market, at the heart of the medieval town [tombstone outside the west door illustrated below]. 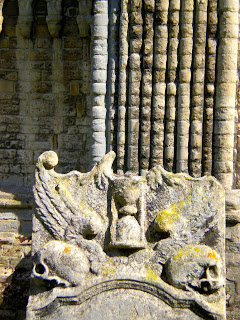 Today, St Margaret is surrounded by busy narrow streets, 19th century shop fronts and 20th century flats, a cheerful scruffiness that melts into the haunting Lynn waterfront [here I'm inserting yet another photograph of the iconic Custom House, and a view across the Ouse to the church at West Lynn]. 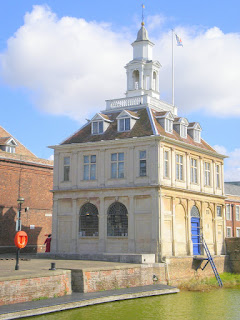 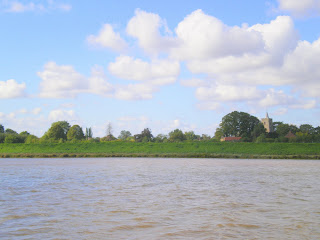 But just off of the Tuesday Market, in the part of town known as the Northend, there is St Nicholas. It sits in its peaceful, tree-lined setting, lifting George Gilbert Scott's 19th century spire above quiet yards, inns, banks, hotels and the jaunty Corn Exchange. This vast hall of a church, some 200 feet long, was, incredibly, built as a chapel of ease to St Margaret, and even today is styled 'St Nicholas Chapel'.

If you exclude Cambridge's Parker's Piece, which is surely too big to be considered, then the Tuesday Market in Kings Lynn is East Anglia's largest urban square, a dreamy lozenge of 18th and 19th century architecture. It surprises me that it is not better known, although the tourist industry is really beginning to gear up in Lynn. This is partly because it is a designated area of deprivation, its old industries struggling to employ the people that they once did [and many of those old industrial buildings have been recently knocked down, opening up views like this one across to St Margaret]. 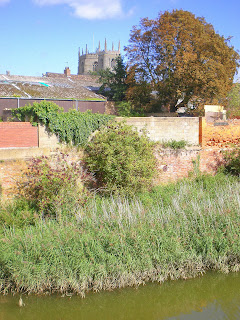 Consequently, there is a smell of European money, the whole town is undergoing a face-lift, and the museums are of the highest quality. And, it must be said, the people are really very friendly indeed, as if they appreciate your interest. Everywhere, in museums, shops and pubs, people go out of their way to help you. If you are fed up with being treated like dirt by the tourist industry in Cambridge, come forty miles north and spend your money here instead.

Amen to all that, and keep up the great work, Simon. As for the walk, I promise to have a figure of funds raised for all you generous donors soon.
Posted by David at 10:50

I am not familiar with the term chapel of ease. As I am continually adding to a glossary of architecture and ornament terms, I would love to know the definition.

The town looks like a "must visit" if we should ever get back to England.

As I understood it, St Nicholas's purpose was to serve parishioners who found St Margaret's, the true parish church, too far to go - it gives some sense of how rich the merchants of Lynn were to treat this 200 ft long chapel as the overflow. Most of the grand monuments are here rather than in St M's.

So I see it as 'ease of access' as well as 'easing the pressure' on the big church. One thing's for certain - St Nicholas is the largest chapel of ease in the country.

Thank you, David. After reading your explanation, I did what I might have done in the first place and consulted the all-wise internet. Up came a Wikipedia entry that confirms everything you said.

The article discusses the fact that St. Nicholas was built first and that when the larger church was built, he older one became the chapel of ease. I suppose this terminology reflects popular use patterns and is not an "official" designation in church law?