Who believes in miracles? 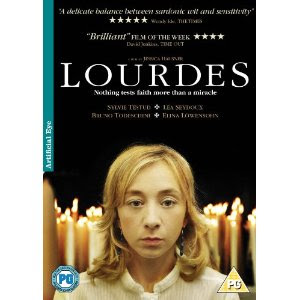 Well, let's just say we would be wise not to rule out the possibility. One of the many marvellous aspects of Jessica Hausner's film Lourdes is that it doesn't treat religion at its most intense, some would say its most oppressive, as a subject for ridicule. In an accompanying interview on the DVD Sylvie Testud, who plays the protagonist and who seems another kind of original, authentic personage offscreen, evokes the French phrase 'tirer sur les ambulances': don't shoot at easy targets. And Hausner doesn't, though she can certainly be wry, as can the good priest in her film, about the more questionable aspects of the pilgrim trade.

Hausner uses colours in an emotional way: the sludgy browns and greens of the hotel where the group of pilgrims is staying, the hints of natural beauty around the basilica, the little red hat that our heroine sports as her helper whizzes her along in her wheelchair, the flood of brightness later when...but I've been spoiling the Cranford tales, the diplo-mate tells me, so I'd better shut up (though I don't think in any case that the plot is the point). I do know I missed a lot of panoramic filming on a small screen - the actors blended in among 10,000 real pilgrims and priests on location - and I want to see Lourdes in the cinema. It's an understated masterpiece.

It also raises the troubling question of what you do with an apparent miracle. As, of course, does the glorious Song of Bernadette, with its marvellously thoughtful and ambiguous script by George Seaton after the Franz Werfel novel. 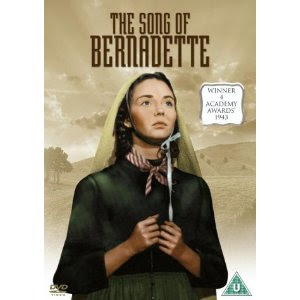 I resisted watching it for years, but I finally succumbed and, like Igor Stravinsky and his wife Vera when they went to see it in Hollywood, shed tears through much of it.

Stravinsky was originally involved as the composer of the film score. That didn't get very far, but it did leave us with the music of the vision which ended up in the central Andante of the Symphony in Three Movements.

I think I must have been misinformed that Bernard Herrmann, that great collaborator of Alfred Hitchcock, took over the Song of Bernadette project. He did in fact write the music for Jane Eyre, another venture Stravinsky began but scotched (the hunting scene went into Ode). Been thinking about Herrmann a fair bit recently, because of the parallels Christopher Palmer draws with Delius in his excellent comparative study (Delius's North Country Sketches, it seems, were drafts for the music of the opera he never wrote, but Herrmann did: Wuthering Heights, of all things. Palmer says the power of Herrmann's vision equals Britten's in Peter Grimes, so I'd better hear it).

Anyway, the Song of Bernadette score, which turns out not to be by Herrmann but by Alfred Newman, uses the essential Delian components of pastoral woodwind and a wordless distant choir for the surprisingly sensitive vision scene, very different from Stravinsky's. See if you don't melt at the expressive nuances of Jennifer Jones. Apologies for the poor picture quality, but this snippet does at least have the scene in its entirety, and sets it up well.

Even if you don't sympathise, I do recommend you watch the film in its entirety for the powerful and far from simplistically sentimental fallout. Preferably in a double-bill with Lourdes.
Posted by David at 11:48

The Jennifer Jones film was shown to us at least every other year in Catholic school when I was growing up. For some reason the moment that stays with me most is when she pulls up weeds and starts to eat them; asked what she was doing, she says she's eating salad.

I suspect the intended thrust of the film evaded me somehow.

Yes, interesting question as to what the 'intended thrust' actually is. It certainly isn't a straightforward piece of Catholic indoctrination, as it seems to have been presented to you. It asks quite a few tough questions and I think the pro-and-con dialogues of later scenes are remarkably stong.

hello my dearest friend
Keita has gone in for his stem cell transplant and I am hanging around Tunis, still waiting... I noticed you put up the picture of the hotel surrounded by rice sacks.. thank you for thinking of us! lots of love
Sophiexxx

Thinking of you still, especially if this is the big day...but how the story of K's celebrity footballer status among the waiters warmed the cockles for a while.

Am afraid that living in Rome to close to the fire, has turned me into a terrible cynic. Any pilgrim site be it Chrisitan or other makes me nervous. Shades of Taliban.

An OPERA based on Wuthering Heights??? If you can find it (Herrmann's. And one cannot imagine Delius having any hope)I will come and listen also ( sounds like Herod).

David Cecil wrote that Emily Bronte did not write as did other novelists. She asks of the world "what does it mean?". Her characters are seen "only in relation to the cosmic scheme of which they form a part" and "in relation to time and eternity, to death and fate and the nature of things". Leavis said when a film was proposed "They don't understand what sort of thing the novel is". It is certainly NOT NOT NOT a story

Reluctant as one always is to invoke Wagner, I feel that only he could do it

Character-studies by Janacek, moors music by Delius would do the job, I reckon - only up to a point and making it something else, of course.

Delius could do the famous last paragraph, perhaps. That paragraph unravels the novel and suddenly stands back from it.