Trio for the end of plenty 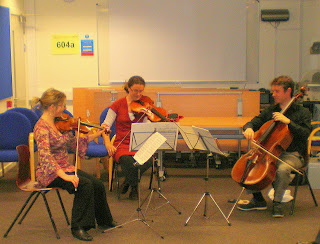 In a week where we all found out how much we're going to suffer from the cuts - the poor more than the rich, as usual*, the arts, adult education - we had three distinguished visitors from the BBC Symphony Orchestra to the course at the City Literary Institute, hotfoot from the meeting in which they'd learned how they might be affected.

How we adored violinist Anna Smith, viola-player Kate Read and Michael Atkinson, cellist of the suspended-due-to-pressures-of-child-rearing Merchant Quartet (one of four from the orchestra which had already been to play to us). I hasten to add, by the way, that I took the above not great photo while they were warming up, not during their performance. Might not this be the best possible advertisement for these non-vocational, purely appreciative courses which could be the first to fall under the axe - despite the fact that, filling up as we do on the first day of booking, we more than pay our way?

Which they won't if hard-campaigning City Lit Principal Peter Davies has anything to do with it. And we've been through worse with a previous Tory government which threatened to close us down altogether. I'm still not clear on what future, and what cut-percentage, adult education faces, as it's low down the list on the reporting. Watch this space**.

In the meantime, the BBCSO trio - believe it or not, the second group of its kind that's come to the course in less than a year - played us a work I'd never heard, Dohnanyi's Serenade. 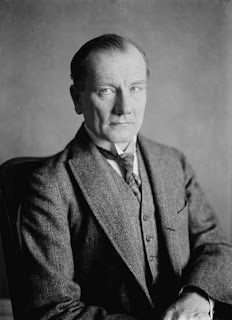 Like Korngold, young Erno was a prodigy who kept on ploughing the same late-romantic furrow, and rarely sounded the native woodnotes like fellow countryment Bartok and Kodaly. Yet within those bounds the Hungarian can surprise. The Serenade of 1902 starts in orthodox if piquant fashion, bringing the viola to the fore in the lovely second movement. But the scherzo and finale run chromatically wild, and the heart of the work is the Theme and Variations, ending ethereally as the viola floats between violin weavings and cello pizzicati. We loved that movement so much that I cajoled the trio into playing it again at the end. 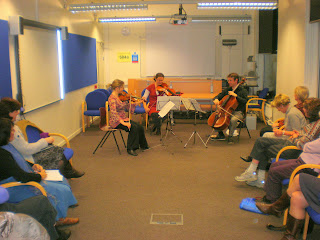 In between, we asked the usual probing questions, and found out that Anna and Mike were in two different minds about the Roxburgh premiere the other week (Kate had taken the week off, which may have been as well as it was one of the hardest the other two had ever experienced). Good to hear a detailed defence of certain aspects of it from Mike, when all we've had so far are invective and abuse on the Arts Desk site. He added that they'd found the Elgar Falstaff, which has been out of their rep for some years, much harder to play.

All three enthused about the winner of the Besancon Conducting Competition they'd been the resident orchestra for: not since Bychkov at the 2009 Proms had a conductor so amazed them, along with judges and audience, as Japanese newcomer Kazuki Yamada. You heard the name here first, and don't miss his first concert with the BBCSO on 4 March 2011. Here, sure enough, is the performance they especially raved about - the first movement of Berlioz's Symphonie fantastique at Besancon (UPDATE: removed from YouTube by spoilsport Yamada).

Talking of astonishing young 'uns, BBC New Generation Artist Khatia Buniatishvili, a 23 year old Georgian pianist and protegee of Martha Argerich, will be playing the Chopin Second Piano Concerto at one of the orchestra's Maida Vale concerts (as well as a Wigmore lunchtime on 1 November which I'll have to miss). 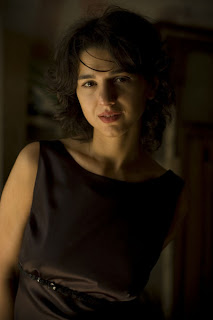 She stunned some of us, and infuriated others, at Stephen Kovacevich's 70th birthday concert on Sunday evening. True, the Liszt sonata was tumultuous and very fast - a criticism of Buniatishvili's playing generally, I've noticed - in the demonic torrents. But she makes such a full, rich sound and shows such painful sensitivity in the few moments of redemption that I was won over with tears in my eyes - and a pain in the gut from the way she seemed to be punching it, not unpleasurably (masochistic me). And I was right at the back of the hall...well, these are exciting times, and Buniatishvili is going to be around for many years to come. Here's another YouTube clip from the BBC, of Khatia playing the finale of Beethoven's Appassionata Sonata:

Finally, there's something to celebrate tomorrow when the BBC Symphony Orchestra marks its 80th birthday with a megaconcert including two new or newish works (by Saariaho and Stephen McNeff. Wagner's Flying Dutchman Overture, which launches the programme, was the first work in the BBCSO's inaugural concert under Adrian Boult on 22 October 1930; early the next year Stravinsky came to play and Ansermet conducted the orchestra in his Rite of Spring, ending tomorrow's proceedings.

Fascinating to read, in Nicholas Kenyon's hopefully to-be-updated history of the orchestra, of wartime musical policy. In 1941 its credo was headed, albeit somewhat pompously, by 'Creative Principle: Music is an ennobling spiritual force, which should influence the life of every listener'. A message that needs to be reinforced, perhaps differently worded, today. Here's a bit of elegiac respite after all that hectic music: Elgar's sad little Sospiri, Boult conducting the BBCSO in Bedford during the war (UPDATE: also removed, who knows why, as it's out of copyright).

*compelling piece here by Johann Hari in today's Independent. If you haven't the patience to read it all, how's this for clarity: 'There is one stark symbol of how unjust the response to this economic disaster caused by bankers is. They have just paid themselves £7bn in bonuses – much of it our money – to reward themselves for failure. That's the same sum Osborne took from the benefits of the British poor yesterday, who did nothing to cause this crash. And he has the chutzpah to brag about "fairness." '

**Second footnote courtesy of Peter Davies: 'we will not know the actual implications for us until 21 Nov, when the Department issue the "grant letter" spelling out their exact priorities and funding for next year.'
Posted by David at 09:16

Hans Dohnanyi, son of Erno, was one of the brave aristocrats ( the Dohnanyis were a noble Hungarian family) who took part in the resistance to Hitler and was executed most horribly

This is not the place to sort out the complex arguments taking place about the best way to correct the economic problems facing the country, but perhaps in view of the comments in the blog I could mention one factual matter

The crisis was not caused by the banks, though they exacerbated it by their irresponsible lending and unwise investments. It was caused by governments, central banks and the regulators. All those parties believed that the good times would last ("I have abolished boom and bust", said Gordon Brown, repeatedly, in one of the clearest signals that he too was gripped by the mad consensus). In this environment governments overspent ( I wonder if the grocer's daughter would have done so?); central banks did not control the money supply by putting up interest rates, so that house prices rocketed; and the regulators allowed absolutely hopeless balance sheets like that at Northern Rock to chunter along happily, lending too much. It is hardly surprising that the bankers also thought that the good times were here to stay.

It is interesting to speculate what would have happened if a revived Mrs Thatcher had in (say) 2002 cut out the rise in welfare
payments and forced the imposition of higher interest rates and the tough regulation of banks. I suggest that she (or any government which did that) would have been vilified for preventing people from buying houses and from providing more help to the disadvantaged, as she was vilified in the 1980s. But she would have been right, and the financial crisis would have been much less serious. Economic reality is there and cannot be over-ridden by those who want reality to be different so that they can do kinder and nicer things.

Woah! I was quite exhausted by the Khatia Buniatishvili Appassionata performance - truly remarkable. At the end I thought of Prokofiev's "hands of steel". The great thing about Beethoven is he was so musically over the top himself that no performer can ever out-extreme him.

On a completely different note I was knocked out by the BBC CO's In C by Terry Riley on Discovering Music yesterday. I suspect this is not your thing but I will be i-playering it again if I get the chance.

Good point about Beethoven, Howard - I'd say the same was true about the Liszt sonata, a crazy piece in the first place, so demonic excess was in order.

I have a recording of In C, but I haven't heard it for some years. Must give it a listen. Your recommendations always taken to heart.

David, points taken. Wasn't Hans the father or uncle of Christoph the conductor? He has often spoken about it in interview.

Yes Christoph Dohnanyi is the son of Hans and it may also be of interest that he (Christoph) was at one time married to Anja Silja. Quite a family.

Has anyone been as convincing as Anja Silja in the Makropulos Affair?

The answer to that last question is no, certainly not in my experience of stage performances. We've been watching the Glyndebourne DVD in the six classes I'm running on Makropulos, and some of the students were breathless to realise that though they'd thought Roocroft and Barker very good, this was a whole different ballgame.

I'd love to have seen Soderstrom in the role, though. Her inflections on the Decca recording are the most consummate of all. Anja did tend to make up some of the words and notes...but she's a goddess and so most of us forgive her that.