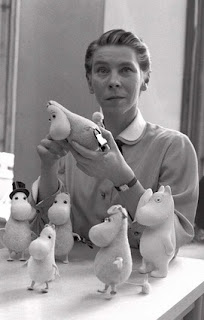 I've got it back to front - having been deprived in my childhood of Tove Jansson's extraordinary Moomin books, and reading the novels Jansson began to write in late middle age first. But now that I've started on the saga of her best beloved creations, I understand that the same wisdom, spareness and clarity connect the two worlds. Just one thing troubles me in the Moominprefaces: it says 'she lived alone on a small island in the Gulf of Finland'. She didn't; she lived with the love of her life, long-term partner Tuulikki Pietila.

Anyway, I AM the Hemulen, that frowning big-nosed creature who always wears a dress, no-one knows why. He's certainly supposed to be a bloke, because women don't collect in that obsessive way. I was a bit surprised when he just cropped up in Finn Family Moomintroll, which I thought was supposed to be the first in the series. But that, as it turns out, is Comet in Moominland, in which Moomintroll and acquisitive wee Sniff collect their future housemates - the Hemulen, Snufkin, the Snork and the Snork Maiden - on their travels.

Be that as it may, the Hemulen is caught 'wandering along with his hands behind his back and his eyes on the ground' by Moomintroll and the Snork Maiden as they float along on clouds made by the eggshells in the Hobgoblin's hat (don't ask).

What troubles the Hemulen, they ask? Has he lost a rare stamp?

'On the contrary', answered the Hemulen. 'I have them all: every single one. My stamp collection is complete. There is nothing missing.'

'I said you'd never understand me, didn't I?' moaned the Hemulen.

Moomintroll looked anxiously at the Snork Maiden and they drew back their clouds a little out of consideration for the Hemulen's sorrow. He wandered on and they waited respectfully for him to unburden his soul.

At last he burst out:

'How hopeless it is!' And after another pause he added: 'What's the use? You can have my stamp collection for the next paperchase.'

'But Hemulen!' said the Snork Maiden, horrified, 'that would be awful! Your stamp collection is the finest in the world!'

'That's just it,' said the Hemulen in despair. 'It's finished. There isn't a stamp, or an error that I haven't collected. Not one. What shall I do now?'

'I think I'm beginning to understand,' said Moomintroll slowly. 'You aren't a collector any more, you're only an owner, and that isn't nearly so much fun.'

'No,' said the heartbroken Hemulen, 'not nearly.' He stopped and turned his puckered-up face towards them.

Well, they find a solution. 'Nature study!' declares the Hemulen. 'I shall botanize'. 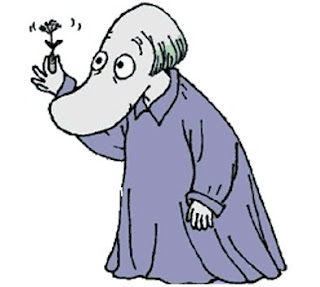 I discovered these books some time ago at my local charity shop and they are entrancing! Thanks for reminding me of them. It just may be time for a reread.

You remind me, Elzabeth, that what I MEANT to say was that all Jansson's books, 'adult' and children's, are going on the shelf of honour to be taken down and read regularly for their wisdom at intervals.

I knew when I came across The Summer Book earlier this year that it's a gift for life - and comfort reading in the best sense should one be low.