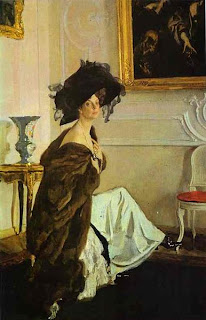 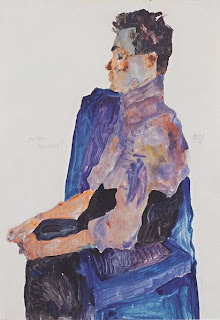 That was the theme upon which I had half an hour to expound before the second in the BBC Scottish Symphony Orchestra's 1911 series in Glasgow's glitteringly refurbished City Halls on Thursday evening (more on the revelation of this virtually new venue, and the concert, in the next post).

Of course it's a subject which throws up further astonishing links the longer you have to think about it, and even as I was putting the finishing touches to my dozen examples, the year of Alexander's Ragtime Band turned my thoughts to checking what Ives was up to. Sure enough, it was then he composed The Fourth of July, third movement in the Holidays Symphony and the trickiest polytonal melee of the lot ('I did what I wanted to, quite sure that the thing would never be played , and perhaps could never be played' - it finally was, for the first time, in Paris on 21 February 1932 - 'although the uneven measures that look so complicated in the score are mostly caused by missing a beat, which was often done in parades').

Even in terms of what DID get performed in 1911, the musical list is perhaps the most impressive of any year. I turned to the treasure-trove chronology of Slonimsky's Music Since 1900 to compare the premieres of the twelfth year with those of the first. In 1900, the lucky public got Tosca (a lively start in January), Finlandia, The Dream of Gerontius; in 1911, another start-of-year blast with Der Rosenkavalier, Scriabin's Prometheus, chunks of Ravel's Daphnis and Chloe as well as his L'heure Espagnole, Sibelius's Fourth Symphony, Elgar's Second, Mahler's Das Lied von der Erde, Debussy's Le Martyre de Saint Sebastien and Stravinsky's Petrushka (the latter two respectively graced by designs from Bakst and Benois below). 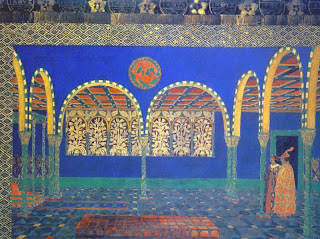 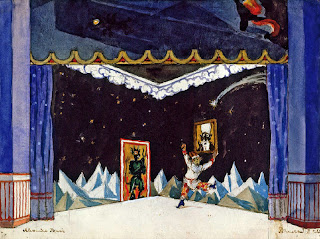 In terms of the as yet unperformed, you can add to the list Bartok's Bluebeard's Castle, from which I took the vision behind the Fifth Door and Judith's blank response as a paradigm of the splendour-and-misery dichotomy of music in 1911, and the fourth of Webern's Op. 10 pieces, composed on 19 July, 'scored', Slonimsky sums up, 'for clarinet, trumpet, trombone, mandolin, celesta, harp, small drum, violin and viola , containing 6 1/3 measures in 3/4 time lasting 19 seconds according to the metronome mark.' (Boulez takes 22). 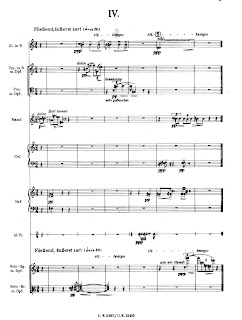 That made a neat contrast to the Mozart-minuet-for-breakfast that turns into a sensuous 19th century waltz in Der Rosenkavalier (taking advantage here of one of the Roller designs the Austrian National Library in Vienna gave access to during its all too short Rosenkavalier centenary exhibition). 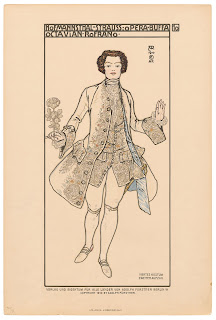 Other polarities I used - analogous, I hope, to the Somov/Schiele split up top (both portraits painted in 1911) - were Debussy's whole-tone versus diatonic in Le Martyre, the slightly unsatisfactory 'fragments' from which were being performed in the concert; Stravinsky's tritone-into-bitonal basis for riven puppet Petrushka versus the white-note-y Russian Dance in the ballet; Sibelius's tritonal obsession in the Fourth Symphony versus the light and airy 'Way of the Lover' in Rakastava; and the dissonant nine-note scream in Mahler's Tenth as contrasted with the great string leap leading to a final becalmed F sharp major at the end of the symphony - if only to prove that human love, in the shape of 'to live for you, to die for you, Almschi' as written beneath it, was the ultimate triumph for Mahler. Who of course died on 18 May that year and was buried in Grinzing cemetery as painted by Schoenberg (an image I've already evoked on this blog, but worth repeating). 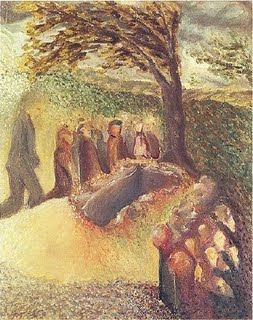 The one issue I took was with the doomy nature of the BBCSSO's blurb: 'immense change was afoot...accelerating towards the cataclysmic events of 1914...the end of the empire...the angst-ridden music of middle Europe...a time of great foreboding'. True, the world was worried by Germany's rush to arms 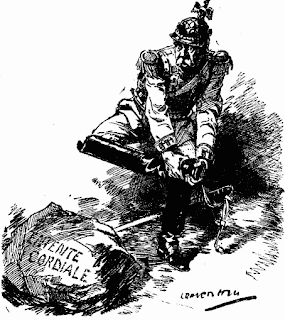 but once more I take my new bible on the subject, Simon Winder's Germania, as gospel against the notion that everyone sensed the world as they knew it was about to crash and burn. Winder maintains that the Habsburg end of things needn't quite have shattered in the way it did had the Austrian Empire not been tied to 'the cretinous and wholly unrealistic aims of the Germans'. He points out Vienna's pioneering brand of 'luxury modernism' and argues it could, and should, have continued to carry on defining European style and idea:

It seems more rational to be angry than mournful that a war of such a peculiar kind would end all this. The final movement of Berg's extraordinary Three Orchestral Pieces, with its lurching, macabre military march, written in the spring and summer of 1914, is generally seen as a brilliant premonition of the conflict to come - but nobody could foresee such a thing. It would be as plausible to criticize Klimt because his paintings incorrectly presaged a future mostly filled with half-nude society hostesses.

The example I took from 1911 parallel to Winder's Berg was from the Rondo in Elgar's Second Symphony, namely that juggernaut of a summer-garden ghost resurrected AntiChrist-like from the first movement. David Pownall's play Elgar's Rondo posited it as a prophetic vision of soldiers marching to their doom on the battlefields of the First World War, which may have been justifiable dramatic licence; but to me it's a private nightmare of the riven, troubled Elgar. Below is the late lamented Sir Edward Downes's performance, posted on YouTube by someone who seems to find the movement happy and joyful (though one commenter contradicts that). The apocalypse I refer to starts at 4'44, though of course the Rondo is nearly all chromatically unsettling.

At any rate a month after the unsatisfactory premiere of that divided symphony, Elgar's splendid and far from harmonically placid Coronation March for George V and Queen Mary was performed. It was recorded in abridged form - it's awfully long, probably the only reason why it doesn't join the Pomp and Circumstance Marches on concert programmes - by Landon Ronald in 1935, a year after the composer's death, for the Silver Jubilee of the same couple. Which I would compute as being 1936. In which case, as J pointed out when I played him the black-white examples, here would be another case of a significant time three years away from a big cataclysm.
Posted by David at 10:41

There is another interpretation to the First World War, it goes along the lines that Britain provoked it for commercial reasons. Germany was starting to seriously challenge British Trade with its own merchant navy and this challenge to British supremacy went a long way to bring things to a head. It did not help that Kaiser Willy was always talking about war as if it was something to be thrown into a conversation only to provoke. Events leading up to the war shows a Foreign Office in London sleeping at the switch too sure of itself to take Germany seriously. Austria's thinking was also faulty based on a system which had gone on for such a long time that no one could see the threat. As for Russia, the Tsar was foolish enough to believe that he could regain prestige after his defeat at the hands of the Japanese fleet in 1905.

Your point, David, about the innocence in 1911 in terms of the oncoming disaster of war is amply explored in Juliet Nicolson's "The Perfect Summer". Such a fine book!

Undoubtedly true, Laurent: Britain and France especially were no innocents, and come off badly in Winder's view of things. The writing was far more obviously on the wall for Russia, especially after the Palace Square massacre of 1905 (your point about the Russo-Japanese War kicks in, too).

Roger, I didn't know about that book and will acquire a copy forthwith. Always glad to be pointed in the direction of others' enthusiasms...

About 20 years ago one of excellent small regional museums, The Hartford Atheneum, had a major exhibition of Bakst and Goncharova designs and almost a hundred original Ballets Russes costumes. They were all made of hand-painted silk and had been maintained in superb condition. It was an incredible feast.

Wonderful, no doubt, and kudos to a small museum: but you should have seen the V&A's Diaghilev and the Ballets Russes exhibition last year (duly blogged after a special preview) - huge and fabulously well presented. We get quite a few, as so many of the costumes were here and flogged off for next to nothing in the 1960s and 70s...

Isn't it fascinating that such an arbitrary starting point could yield such rich results? Among many other delights here, the set designs by Bakst and Benois are gorgeous. (And speaking of polymaths, as you did over at PD about Botstein, I'm glad you repeated the Schoenberg painting for this post--of interest both visually and historically.)

Isn't it? I knew nothing about that painting until I saw a fascinating and comprehensive exhibition at the Schoenberg Centre in Vienna.

There are reams of Bakst designs for St. Sebastien on the web - many of which aren't even in any of my books. The colours do stand out. That, of course, was a year after the Scheherazade which drove chic Paris wild.

I fear that I cannot agree with your commentators on a number of points, or with Winder who is amusing because idiosyncratic in his view of things but therefore not sound. On the specific point of the atmosphere before WWI, one can refer to Virginia Cowles ( I suppose quoting someone ) "The vials of wrath were full". And this was proved by the conversation in 1913 between Churchill and the King of Spain:

King - Mr Churchill, do you believe in the European war?

Neverthelesss, maybe the curent consensus on the very difficult problem of the causes of WWI is that the restlessness of Germany made the continent definitely unstable. But there was no German guilt on the scale set out in that foolish document the Treaty of Versailles, and nothing as clear as the guilt of Adolf in starting WWII