My afternoon with Valery 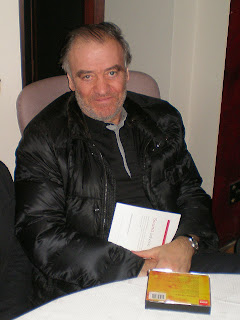 I've known longer waits than Sunday afternoon's predictably leisurely build up to the Gergiev interview I'd been asked to conduct and write up for the Concertgebouw (which he visits early next year for the first time since 1995). There was the 1991 hanging around in the antechamber to his Mariinsky - then Kirov - office, fascinating to watch the various petitioners come and go; the all-day will-it-won't-it-happen anticipation of a second interview which eventually ended up at 1am in a bedroom of Petersburg's Astoria Hotel; the third wait culminating in a speed along the Neva to the Gergiev family home; and the interviews snatched during the two intervals of an extraordinary Mariinsky concert (viola concertos by Kancheli and Gubaidulina framing a Mahler Six conducted straight through with barely a pause between movements).

You might think me a bit of a masochist if I say it's always worth it. But so responsive, rather than on-transmit, is our Valery that something unexpected usually transpires. Besides, the journey, as it were, can be as interesting as the arrival, and never more so than on this occasion. Columbia Artists Management had suggested I show up at 1pm after the Barbican morning rehearsal and said they'd confirm it. They didn't, weren't to be tracked down, so I blagged my way backstage and then had to furnish a business card for the suspicious trio who greeted me. This seemed to conjure up Columbia's vice president (and Gergiev's manager) Doug Sheldon, who took me in to the conductor's room. And there a lively discussion on various players and halls was to-ing and fro-ing between a very engaged Gergiev and four other musicians including - the one I thought I recognised, and he helped me to place him - heldentenor Simon O'Neill.

Simon needed a short session to sing a bit of Siegfried through with Gergiev, and outside I met a colleague I haven't chinwagged with for some time, vivacious Tommy Pearson, who's made films with VG and wanted to nab him to discuss 3D projection among other things. So it transpired that Valery, Tommy, Doug, the LSO's digital marketing manager Jo Johnson and I all piled into a waiting car at 2.20. The driver had a rather treasurable rendition of the maestro's name stuck up on the window; I needed to edit this shot so as not to put egg on the face of the car-hire firm. 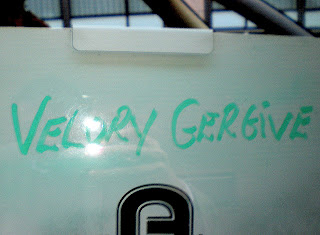 And so we all had a splendid risotto in Charterhouse Square, a lively batting to and fro between us all and Valery curious as ever to know what we thought of this and that. We discussed the Hochhauser tours and visa problems - no prizes for guessing how VG sorts out his - Abbado in Rome (Gergiev was conducting the Santa Cecilia orchestra on the day Claudio arrived for rehearsals), film music, ballet v opera at the Mariinsky and what I thought of Deborah Warner's ENO Onegin which Gergiev will be conducting when it arrives at the Met (I could only be diplomatic and say it might be very different, which no doubt it will be, with Netrebko and Kwiecien).

Also had a good chat with the others while Valery went off to discuss future LSO seasons with its managing director Kathryn McDowell. Then back he came - clutching Muti's recording of the Scriabin symphonies, which may or may not be a clue as to what's in the pipeline - off my other lunch companions went and we finally had our interview at 5pm. Whereupon Gergiev, who had been so delightfully freewheeling and curious though seeming to crumple physically somewhat after his spruce demeanour four hours earlier, spoke with perfect focus and diplomatic charm about the Concertgebouw, Dutilleux and Leonidas Kavakos (who'll be playing the Sibelius concerto). I left exhilarated, as always, and the evening's concert, with the gorgeous Anne-Sophie Mutter on riveting form in a Gubaidulina masterpiece, was much more than just the icing on the cake. 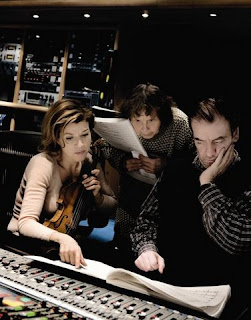 Love this photo of all three artists at an earlier recording session for the work (Gubaidulina centre) by Harald Hoffmann for DG - included it in the Arts Desk review but can't resist repeating it here.
Posted by David at 13:55

A lovely account, thank you David. But I'm finding it hard to square the man you present with the man I've seen conducting recently and, by the accounts of the people I know who regularly work under him, the man with such an apparently fluctuating level of interest in the performance at hand. Does this match your experience, or do you think this wide of the mark?

Will we be able to read your interview? Hope so – sounds like an interesting read.

Not at all wide of the mark, Andrew; it's surely a question of which of the many Valery Gergievs you're going to get on any given night, and how much time he has to focus. When engaged with something, and in a way that squares with my idea of what the piece is supposed to be, there's no-one like him. But I never know what to expect - fast or slow, heavy or light; it seems to be what he feels like on the spur of the moment. He was saying some interesting things about varying according to acoustics, which would seem to account for the very drawn-out Tchaik 5 you heard. The Shostakovich 10 was fast and quite light, not at all what I'd expected, but the level of music-making was very fine.

However the runaway schedule is clearly causing more and more problems with the LSO and others...

The i/v is due to appear in Concertgebouw's Preludium magazine, whether in English as well as Dutch I don't know; it's quite specific to that orchestra so might not have a wider currency. But I may well be able to salvage something for TAD. I wish I'd had the recorder turned on over lunch, though!

So lucky to meet him and speak with him. He is one of my favourite conductors, the other being Muti. You really give a very good account, lively and very interesting to read. Thank you.

Much fun to have a fly-on-the-wall view of your interview jaunt.

Many months ago, the janus trio (three young women, all, to my ears, fine musicians, using the Debussy formula of viola, flute, and harp), recommended Gubaidulina to me, and another music-friend followed suit. I tried on a couple things but I think my ears weren't ready. I'm glad you've reminded me of her, as I'm now listening to In Tempus Praesens and liking it very much (it must have been astounding to hear it live with Anne Sophie-Mutter).

Now, just for fun, here is one instance in which I saw the ArtsDesk review before you posted this. It was a "tweet," of all things, by someone excited by the great review of Gubaidulina. When I saw it was the ArtsDesk, I had to look and see who the reviewer was, and voila, there you were. I replied to the "tweet" to thank him for spotting the review, and, as the LSO was tagged, this response came back: "it went very well indeed - David Nice is THE authority on Russian music so it's always good to impress him ;-)"

See what you're missing by not being on twitter (just kidding, I do hope you know)!

Of course it's always nice to hear flattering things, so yes, thanks for alerting me to the twitterfeed - but I was very impressed by what Donald Runnicles said about reviews (to Igor on The Arts Desk): 'if you believe the good ones, you deserve to believe the bad ones'.