On recent visits to Glasgow, I’ve found myself confined to the more or less unchanging scene up on the hill, around the Theatre Royal, the Royal Scottish Academy of Music and Drama and the soulless, inadequately acoustic’ed Royal Concert Hall. It would have been so simple to stroll eastwards from Queen’s Street or Central Stations and examine the newly done-up Merchant City of the plain, but I haven’t done that since I was a student and it was still something of a no-man's-land.

My loss, as it turns out from this most recent trip. The nice folk at the BBC Scottish Symphony Orchestra spearheaded by Andrew Trinick - always the best of people to work with, so good to see him again after our BBC Symphony days together - must have thought I was overdoing the compliments about the City Halls. I was in fact genuinely amazed by what’s happened here since those (pre-Royal) Scottish National Orchestra concerts, Järvi blasting us with Shostakovich 4 while before it in the interval little old ladies in their tea-cosy hats sat by the windows of the 1950s-feeling cafeteria. 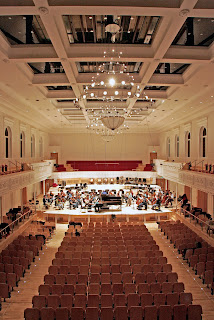 In effect, the main hall of 1841 has essentially been rebuilt and raised from scratch, with a lovely, airy feeling to its white walls and plastered balcony. Arup associates enhanced the acoustics by opening up the coffered ceiling (photos, by the way, since I forgot my camera, are from the BBCSSO and – further down – via GoMA and The Skinny). The audience, to judge from Thursday’s experience, is of all ages and hugely enthusiastic; there’s a buzz here I’ve never felt at Edinburgh’s Usher Hall. The folk at the RSNO, now consigned Glasgow-wise to acoustic hell up on Buchanan Street, can only look on enviously at the Musikverein-style shoebox perfection and point out that the 1100-seater hall, with room for a maximum of 90 musicians on the platform and no resident organ, is too small for what they do.

Which it nearly is for some of the BBCSSO’s noisier scores. But I loved the way the foundations shook with the thundering chorale at the end of Sibelius’s Second Symphony – a generally lithe, no-nonsense interpretation from Ilan Volkov (pictured below in the hall with the orchestra at an earlier concert), which nevertheless gathered quite some intensity through that strange slow movement. And connected, in the wrigglings of the coda there, to the death-throes of Berlioz’s Cleopatra – handsome of voice – true oaky mezzo - if monotonous, colour-wise and a bit pitch-dodgy in the shape of Ruxandra Donose; as usual, the orchestra had the lion’s share of Hector’s shock tactics – the thrummed accompaniments to the three-trombone funeral dirge, the incredible final shudders. 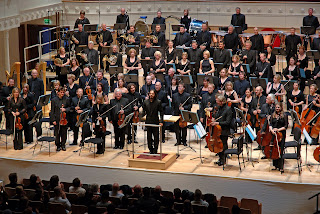 The Berlioz in turn made a muscly complement to the wispier trills and mysteries of Debussy’s Saint Sebastian fragments. And there was a generous bonus, too, in the shape of Julian Anderson’s Eden, starting and ending well with mesmerizing folky-ancient string solos, in between sounding well but not sense-wise adding up to much for me. Though I have to say my godson Alexander, whom it was such a treat to host for an evening now that he’s started a new life as a student at Glasgow University, was excited by it all and told me chapter and verse why.

He also enjoyed some of the sounds I dug out for the 1911 talk. And I loved the lecture-space, a room apparently rediscovered, Danny Pollitt of the RSNO told me the next day, during the renovation work on the building. 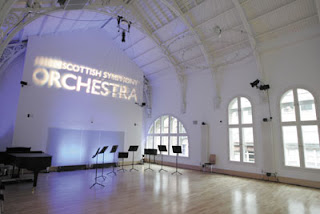 Down south at the Barbican’s Fountain Room – much as I prefer it to the hall for the ability to establish a rapport with the audience at pre-performance talks - I nearly hit my head on the low ceiling and remain unlit on the platform; here there’s space enough to accommodate another full house and lighting that is almost phosphorescent. And the streets around Candleriggs take on a light and elegance that felt to me, unless I was hallucinating, a bit Parisian.

With a couple of hours to spare the next morning before catching the train back to London, I was heading for the St Mungo Museum of Religious Art and Life but got unexpectedly waylaid by the delights of GoMA, Glasgow’s Gallery of Modern Art housed in a splendid neoclassical building in the same grid as the City Halls. 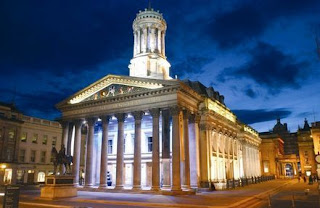 The ground-floor interior had been turned into what the brochure rightly describes as ‘a twenty-first century sculpture court’. My thanks to photographer Nick Milligan and his work in The Skinny for permission to reproduce the next two images. 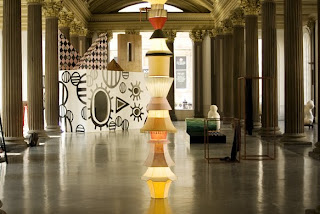 The artists, all from Glasgow, have been yoked together under the aegis You, Me, Someone Else, and the blurb struggles to link artworks made from found objects with finished products in wood, metal and plaster, but never mind; all have the space they need and some complement the building in surprising ways, like Andrew Miller’s wood and rope chandelier 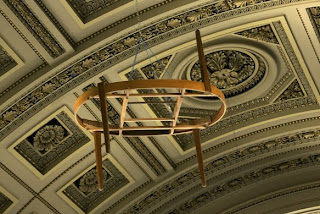 and his tower of lampshades seen in the wider shot. The most resonant object for me was Lorna Macintyre’s Apollo.

The mythic symbol of sun and music speaks through a disarmingly simple conjunction of a wooden bass, a lyre-like bent metal rod, a harp string and a ball covered in gold leaf. Stravinsky, I fancy, would have approved.

Downstairs at GoMA is a well-used library with coffee-shop attached, while in Gallery 2 Alasdair Gray’s impressions of Glasgow in 1977, when he was commissioned by Elspeth Gray of the People’s Palace to encapsulate the city as he saw it then, showed me a side of the writer-artist I didn’t know from his book illustrations to Lanark and the like.

There’s energy in the big four-part panorama of a single street, and I’d have been delighted to be one of the worthies and/or locals he portrayed. Shame so little of this seems to appear on the web. It can be found in a book that’s just come out which I’d rather like, A Life in Pictures, but it seemed a bit expensive at £35 – the price to pay for good book production, I guess. Anyway, the exhibition was well frequented by allsorts, just as I remember a Kelvingrove display of 19th century architectural designs back in the early 1980s being attended by a whole range of citizens, and the People’s Palace dotted with proud oldsters explaining to their grandchildren the significance of the ordinary objects lodged within. A city with plenty of spirit still, to be sure – as Alexander, one of its most recent citizens fresh from the sleepy comforts of the Borders, is happy to attest.
Posted by David at 09:03

I have been trying to find a way to get in touch with you, so apologies for using the comment box to do so. I am producing the UK premiere of Jake Heggie's chamber opera 'For a Look or a Touch' as well as a semi-staged recital given by Jonathan Lemalu.

I would like to invite you to come to the performance. Below is all the information.

I look forward to hearing from you.

Please find the press release for the UK premiere of Jake Heggie's chamber opera For a Look or a Touch with baritone Duncan Rock in the title role, and a semi-staged performance of An American Songbook sung by bass-baritone Jonathan Lemalu accompanied by Michael Hampton.

This production is put on by Fusebox Productions.

If you would like press tickets, please get in touch with me and I will get them organised.

For a Look or a Touch

“Silent. So many years of silence.”

How will Gad ever forget the horrors of the concentration camps when he is haunted by the ghost of his former lover who he so longs to remember?

Based on the journal of the late Manfred Lewin and interviews with his lover Gad Beck and other survivors (taken from the film Paragraph 175), this touching and emotional chamber opera is a tale of two gay lovers, both prisoners in the concentration camps of Nazi Germany. One man dies, the other survives. Neither will ever forget.

Heggie’s mesmerizing yet haunting depiction of loss and persecution echoes the voices of all homosexual victims lost to the holocaust.

The evening concludes with An American Songbook, a semi-staged selection of William Bolcolm's dark, witty and suggestive Cabaret Songs, and Richard Rodney Bennett's kaleidoscope of nursery rhyme settings ranging from the sublime to the ridiculous, Songs Before Sleep.

Quite happy to let that stand, Karin, as publicity for Fusebox, whose Queen of Spades (adaptation of the Pushkin) I did so enjoy. And I've just come back this evening from an excellent pocket Mikado in the King's Head which I'm about to write up for The Arts Desk.

Probably slightly short notice to get to this now, but will check and contact you if it's possible.

I do love your travelogues, though that's really far too reductive way to put the way you dig in to wherever you are. I've actually just sent Mom a link to your Iceland post with the fabulous basalt formations. (She's apparently always wanted to go there.) Next up for her will be a visit to your Ainola posts (did you know you had five, not four?). As for Glasgow, I love that tower of lampshades--one wonders why no one has thought of it before!

EVERYONE should go to Iceland! I think/dream about it night and day. I'm nearing the end of Laxness's Independent People and glad there are so many more to read...

Mind you, everyone should go to Glasgow too...

I have to get to Scotland before too much more time passes. I've toured Wales and a big chunk of southern England, but never Scotland and I understand what I'm missing even more form your pictures and descriptions.

David - I think you are compelled by Northern-ness, just like C S Lewis ( see "Surprosed by Joy" ) and my late mother, who evinced no more than a vague interest in anywhere else. When you speak of the Northern countries and their music there is a spring of identification which informs your responses.

Coincidence, Sir David, coincidence - all these northern visits have come at once. I'm just as infected with southern Greece and Italy, or middle eastern cities. I like to think so, at any rate.

Oh, and Will, I'd say Glasgow is worth a day or two of anyone touring Scotland. The highlands and islands have priority, of course, and you need at least double the time for Glasgow in Edinburgh. The western city doesn't reveal its charms, which are chiefly the uniquely friendly aspect of most of the locals, so easily