Hard times for the little man 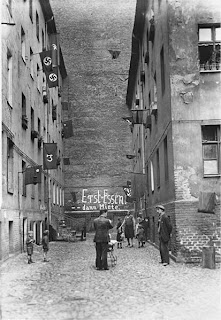 Germany in 1932 is both the setting and the place/time for the writing of Hans Fallada's Little Man, What Now?, but the artistically enhanced realism depicting a rather nice young couple trying to make ends meet while the economy crashes around them rings alarm bells today (and no doubt always has since then, in some parts of the world). Unemployment had risen since 1929 from 1.4 million to 6 million, wages had fallen by 50 per cent and social welfare was in tatters, a bureaucratic system made it difficult if not impossible for the poor to claim their dues - and Hitler was poised to take power, most plausible (for some) of a bad bunch of politicians. 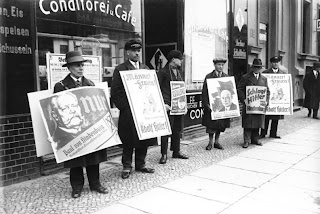 All photos of 1932 here courtesy of the Bundesarchiv, which has a huge selection on Wikimedia Commons. The writing on the wall in the tenement shot up top, between the Nazi and communist flags, reads 'first food, then rent' - a slight ringing of the changes on Brecht's 'erst kommt das Fressen, dann kommt die Moral' ('first comes a full stomach, then come ethics'). 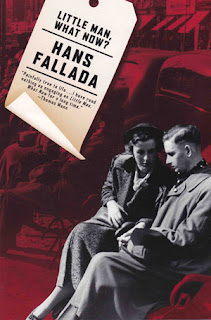 Not that you'd really be aware of the ultimate stormcloud about to burst in 1933 from the little world of Fallada's novel, apart from the presence of the odd Nazi in various institutions. The focus is on the personal realm in which the novel's hero, Pinneberg, and his adorable young wife Lammchen (no umlaut in the English translation), almost exclusively exist, though her backbone seems to come from a politically committed family. Quickly recovering from the news that Lammchen's pregnant, they marry and move to Berlin to lodge - at a cost - with Pinneberg's louche mother, soon find they have to flee to more secluded lodging, and depend on the young man's job as a very good salesman in a department store. The couple will have to mind every mark - it's no mere social documentation that Lammchen draws up a meticulous sheet of expenses - even if they want something as basic as an evening out (though they do go to the cinema, and see a film that's anything but escapist). 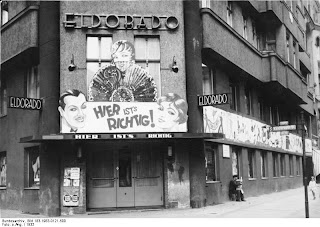 Emma Pinneberg, sweet-natured Lammchen, is one of the most plausible good characters in any novel, with a core of steel and an unassailable sense of what's just and fair. Her husband is more complex, if not necessarily more interesting, and many of the most striking passages in the novel deal with his sense of, and sensitivity to, the insecurity of his position. There's a troubling early scene where the doting husband, having just got a job thanks to the string-pulling of his mother's dodgy lover, stands in a desolate autumnal Kleine Tiergarten among the unemployed waiting for they know not what. 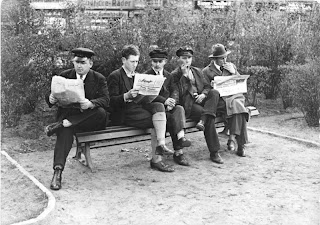 Externally, he didn't belong to them, his outer shell was smart. He was wearing the reddish-brown winter ulster that Bergmann [his previous employer in a provincial town] had let him have for thirty-eight marks, and the hard black hat, also one of Bergmann's, no longer completely in fashion, the brim's too wide, so shall we say three marks twenty, Pinneberg?

Externally, then, Pinneberg did not belong to the unemployed, but internally...

He had just been to see Lehmann, the head of Personnel at Mandel's department store; he had gone to get a job and he'd got one, it was a simple commercial transaction. But as a result of this transaction Pinneberg had the feeling, despite the fact that he was to become a wage-earner again, that he was much closer to these non-earners than to people who earned a great deal. He was one of them, any day he could find himself standing here among them, and there was nothing he could do about it. He had no protection.

He was one of millions. Ministers made speeches to him, enjoined him to tighten his belt, to make sacrifices, to feel German, to put his money in the savings-bank and to vote for the constitutional party.

Sometimes he did, sometimes he didn't, according to the circumstances, but he didn't beliecve what they said. Not in the least. His innermost conviction was: they all want something from me, but not for me. It's all the same whether I live or die. They couldn't care less whether I can afford to go to the cinema or not, whether Lammchen can get proper food or has too much excitement, whether the Shrimp [the child they're expecting] is happy or miserable. Nobody gives a damn.

And all these people standing around in the Little Tiergarten, and a real zoo it was, full of proletarian animals rendered harmless by lack of food and lack of hope, they shared the same fate. Three months' unemployment and - goodbye, reddish-brown overcoat! Goodbye to any prospects for the future! Jachmann [his mother's lover] and Lehmann could have a quarrel on Wednesday evening and suddenly I'll be worthless again.

Despite the hopeless tone here, and the notion that you carry the seeds of your own failure if you perceive it despondently from the start, there's some humour throughout. Not least when Pinneberg's distinguished fellow-salesman takes him along to a naturist evening at a local baths and, in a marvellous tragicomic scene, he has a melancholy conversation with a stocky Jewish middle-aged lady who sadly and matter-of-factly tells him of the daily abuse she faces. The scenes of Pinneberg's anxiety when Lammchen stumbles to hospital to give birth and the awkward domesticity with the Shrimp are charming, too. 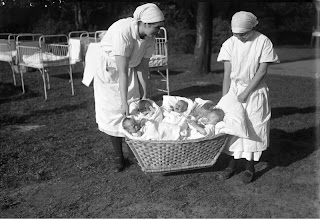 As is Lammchen, always - real enough not to be too good to be true.

Fallada must have drawn all this from a life which had even more severe problems that Pinneberg's, though it seems he was never on the breadline in the same way. I can imagine this would make a marvellous TV adaptation, as it's mostly dialogue. There was indeed a 1934 American film starring Margaret Sullavan, which I'd love to see, even though I imagine it must be compromised in some details. 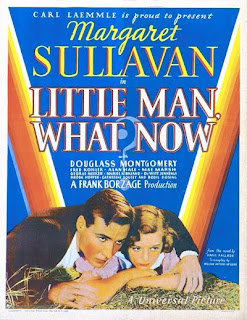 That as much as anything, due to its Jewish artistic team, counted against Fallada in the eyes of the Nazi regime. And then, of course, we have the terrifying but always human picture of Alone in Berlin. This author is one of the greats, Tolstoyan in the way that seemingly unsympathetic characters become more likeable when you least expect it. Ultimately it's the humanity of the central couple and the way they face their vicissitudes - or, in Pinneberg's case, don't always face them - that makes Little Man, What Now? unique.
Posted by David at 09:44

Ah - interesting - I did wonder and didn't get round to looking it up in the dictionary.

David, as mentioned before, you introduced me to Fallada for which I am more than grateful. Seeing the (actress) name Sullavan brought an immediate segue to Rosemary Sullivan's story of the remarkable Varian Fry in her book Villa Air-Bel: Marseille was the dead end as the fascists advanced southwest and Fry earned his nom The American Schindler.

I think your photographs of the park and the trees in your following post quite breathtaking, as usual, may I say.

I knew nothing about Varian Fry, wanderer: thanks for putting me on to that. And glad to see you're back blogging again - a crucial lifeline to Oz arts and nature...